How do I explain this?

Those tables full of bananas should be interesting enough for a blog post (at least to me), but maybe I should start with my own little story:

Last year in March upon returning from Kenya, I realized I should cough up some mbeca and invest them into a good pair of running shoes – which I actually never had before, only “cross trainers”, which are like heavy weight shoes used for a firm stand while playing tennis (@ Impala Club when that membership fee was still affordable).
Shortly after their purchase, they quickly started to rot in the darkest corner of my closet, even though I took them with me to Frankfurt. Keeping your running shoes around is a perfect reminder that will nag on your conscience: Yeah, I should do more sports and well…oh…there’s something online I’ll still need to check out…oh…I am too tired today.

Some days ago, I reactivated my almost new running shoes and started jogging. I did this because a) it feels good, b) I am slightly overweight *cough* *cough* and c) I’d registered for the JPMorgan Chase Corporate Challenge 2008 in Frankfurt am Main, Germany – which is “an annual series of 3.5-mile (5.63 km) road footraces” taking place in 12 different cities worldwide.

Mind you, I may be good at other things, but I am bloody beginner when it comes to doing sports (ok, tennis back in the days and some beloved swimming from time to time), but it also started way back in school when I used to be the last one selected for teams. You know it yourself how mean kids may be – if you’re bad at sports, you’ll always be an outsider in some way, especially if your sports teacher is the same who teaches you mathematics. This teacher actually advised me after graduation not to study any scientific subject and, fortunately, I didnt listen to him. Obviously, there was still an open issue on this for me and I needed to prove it to myself that my teacher was wrong in 1996. A personal affair, if you will.

Now, running. Damn, it feels so good. The last time I had tried that was in Nairobi, trying to find a good route without potholes. But still, running never was THE sport for me, and this although it’s just very simple and you won’t even require proper shoes or other equipment. Just start, set yourself a target, see how it works, et voilá.

Ok, back to the JPMorgan Chase. When I came to Frankfurt in June 2007, I didn’t have time to register for the 2007 Chase and consequently had to witness it from the sidewalk. I did see a lot of other – overweight – ppl taking part, and – considering the relatively low 5,6km distance – realized that IF these ppl are taking part, I should also try it.

So here you go: 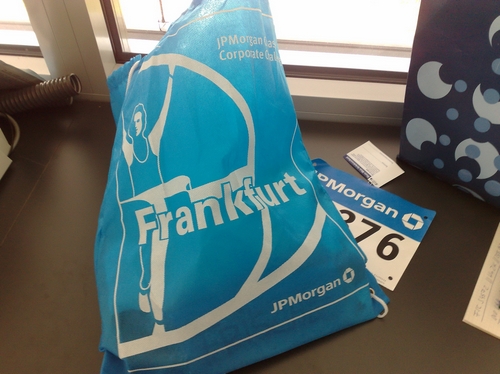 What you receive is a bag with a T-Shirt, your starting number, some free magazines on running and some glucose. Approx. 10% of your starting fee will be donated to a charity organisation and you get the chance to actually run together with the CEO of your company (cool guy, btw, he beat me by 4 minutes) and around 73.718 other ppl from 2.589 (more or less competing) companies. 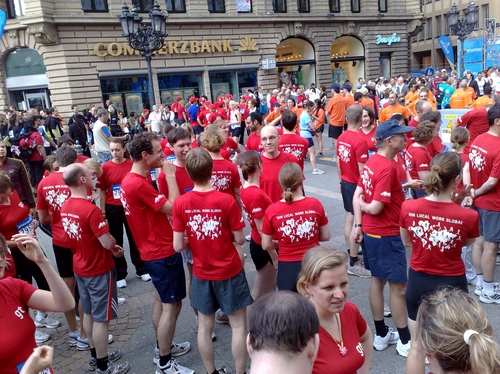 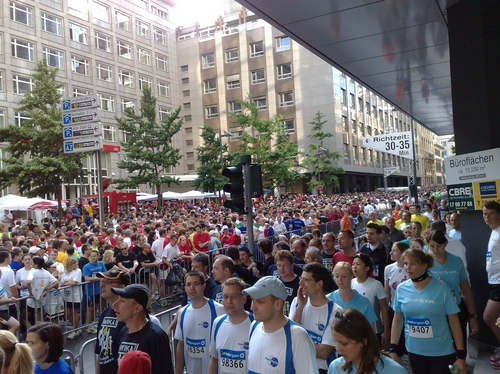 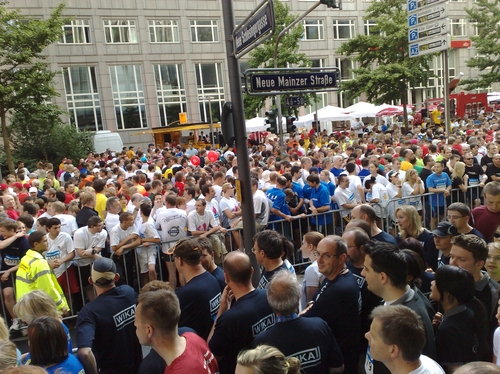 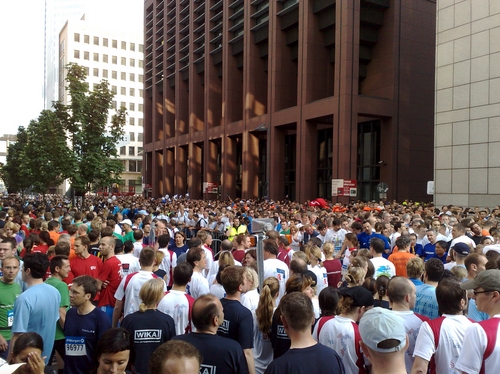 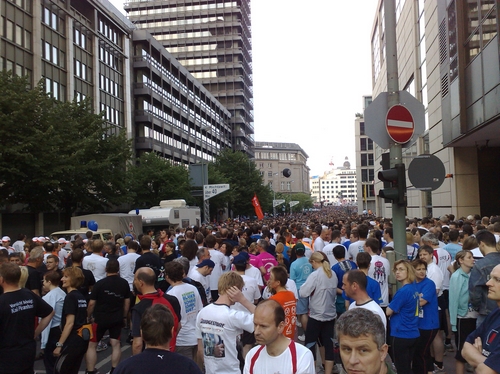 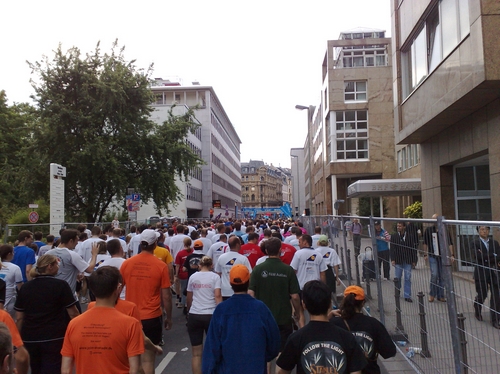 They actually had two starting points due the huge amounts of ppl. The Chase started at 7:30pm, but I only managed to cross the line at 8:20pm….

It really is a huge events, even with half-naked Brasilian ladies at the road side doing some samba for those who like it… some companies also seem to invest a lot of money into this event and equip their staff with shirts and other corporate things. Actually, it’s a win-win situation for everyone involved. 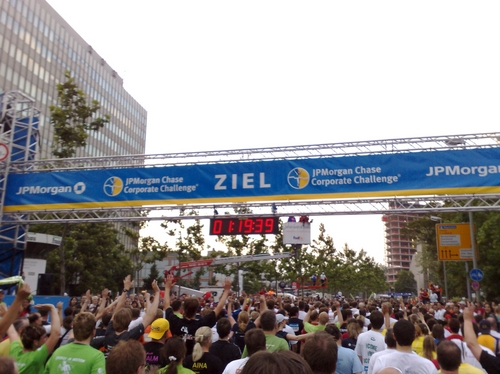 After around 40 minutes, I eventually managed to pass the finishing line. Not bad for a beginner, if I may say so. With such a huge amount of ppl on the road, it really isnt that easy to run with no obstacles in the way, but still, great fun, some sports and: 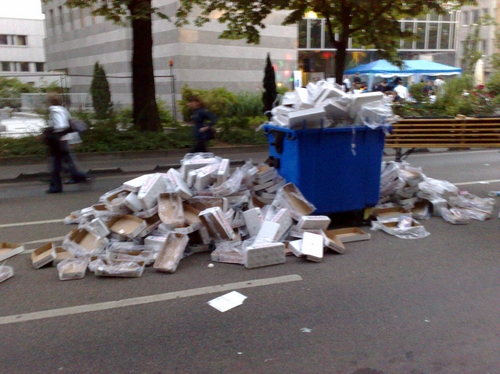 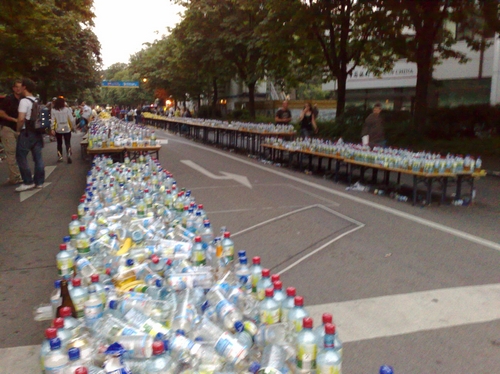 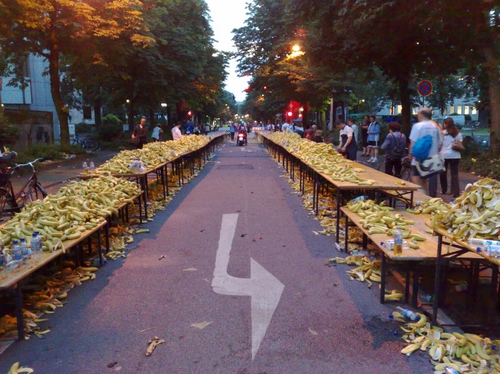 BANANAS from here up to the end of the world.

Now you know where they are eaten. 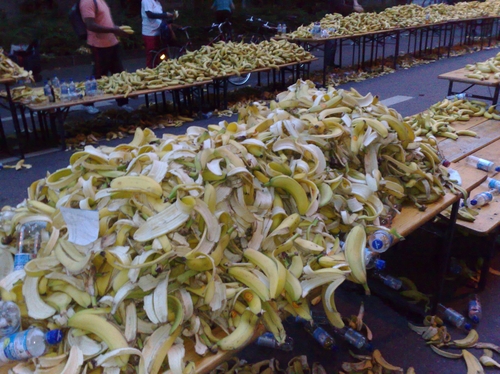 My plan actually included providing you with a link to the fabulous Nokia Sportstracker website and my profile there, but do to the narrow roads in downtown Frankfurt, GPS reception was a bit distorted on my N95, so Sportstracker didn’t work. If you own a modern Nokia S60 phone and enjoy running, this little utility really adds value to your phone. Used it the other day to track my speed and distance. 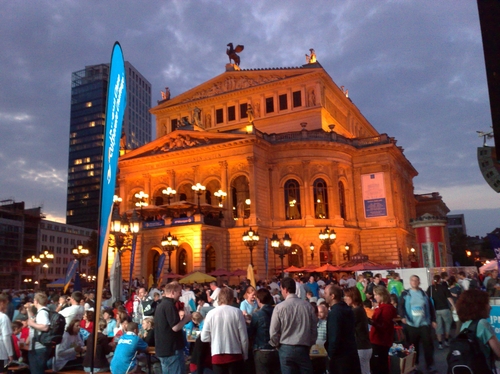 After the Chase, we enjoyed some good beers and watched Turkey scoring a 2:1 against Switzerland. What you see in the pic above is the illuminated opera of Frankfurt. Liked the colours.

Ok, the JPMorgan Chase was great fun and I think I’ll be at it again next year – and in the meantime, I’ll have to train for October, because that’s when I’ll have a little 10km competition with members of my extended family. So yes, if you want it, you can do it.

n.b.: other positive side-effects of a regular running habit: you get to sweat much less and/or start sweating at a much later point while walking around under the sunshine. In other words, this whole ecosystem inside my body has improved and will certainly continue to improve. For a non-sportive person like me, this improvement is the biggest advantage. 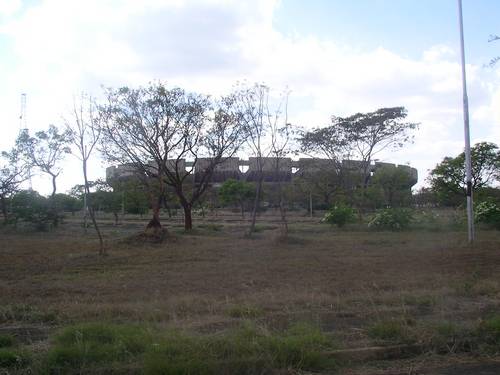 (b) What you see in front of the picture is the overgrown parking lot of the stadium. The lamps all lack their bulbs and the whole area behind the stadium resembles a small (bird) sanctuary – we even saw a guinea hen.

(c) With just a little bit of maintenance, this place could really look beautiful as the facilities still look very promising and were def. made to last longer. 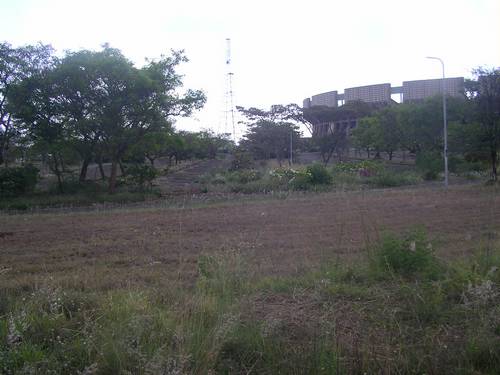 Who is in charge of this place?

“Recently, the Kenya Football Federation kicked out our national team, Harambee Stars, out of the Moi International Sports Centre, Kasarani, and invited the better-known Cameroon’s Indomitable Lions to practise at Kenya’s best stadium.

Instead, the national team was taken to Ruaraka, a field not as good as Kasarani. It mattered little that at the time, Harambee Stars was preparing for a match with Eritrea. In the end, Kenya lost to a team that had been dismissed as minnows.”

Koigi’s recent comment on the Mzungu/Obama/adoring-problem (“Our people have a long history of self-hatred”) …now, although I am not willing or able to dive deeper into this matter and although I don’t want to openly wonder about his continued efforts to entertain readers with his views on various matters (seems to me he has an opinion on almost anything – anyone remember JJ?), I find it quite entertaining how he puts in this vivid example from the Fussballwelt.

(note to myself: learn the names of your local football/soccer team and be prepared to talk about this subject more often to enhance business opportunities in Kenya :-)

True worrrshippaas of Kikuyumoja’s Realm might remember this entry, where I highlighted that Kenya and Germany do in fact share similar national flags.
Upon opening my snail mail box this morning, I found the following “How-to-confuse-Gamaans” instruction – carefully prepared by my dearest fan Mbuzimoja: 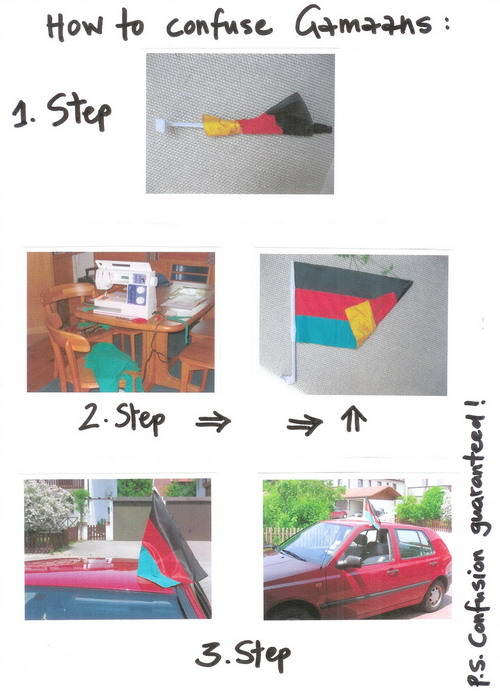