Here’s an idea that has been haunting me for years now, and I am most certainly not the only person who has the following concept in mind: using microSD cards in mobile phones for ALL user data.

ALL user data = everything I enter into the phone. The address book, multimedia files, user defined settings. 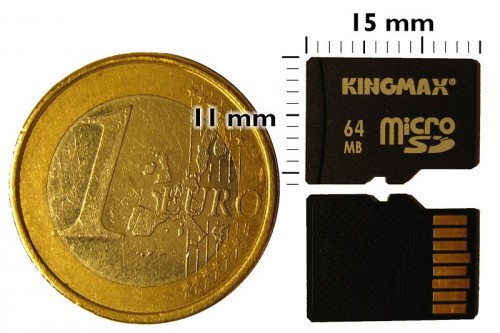 Buy an iPhone, install everything, have it drop to the floor or into the toilet, resulting in a water damage and the phone won’t be recognized by iTunes – well, even your most recent backup on the cloud will only be as good as when you last made a backup. No microSD cards on iPhones.

Many Android phones already come with slots for microSD cards. Plug it in, roll out your backup via the internal backup routine, via Titanium or Google, and you’re done. It’s not 100% the way I want it, but it’s getting much closer than what you have on an iPhone.

Sure, there’s the cloud, some will argue. But a lot of users out there still are on a slow internet connection (if any) and many also don’t want to have their data saved in the cloud.

“Without a microSD card”, I was once told, “there’s less to worry about. And from a business perspective, it’s also more secure”. Well, is this a valid argument?

There’s an older essay on microSD cards in phones by (mobile phone expert and analyst) Eldar Murtazin, where he argues that microSD cards aren’t the better option – but I couldn’t disagree more. Of course, as an analyst he also looks at why phone manufacturers have used memory cards on phones instead of internal memory and the cheaper price may be a reason for their introduction on phones some years ago. He also looks at figures from the actual use and says that many don’t actually use the microSD card or what it is capable of.

Well, for a reason, I’d say. It’s because the current setup where I can only use it for storing multimedia files and apps is really insufficient. My ideal phone is a dumb phone with strong CPU power, some connectivity extras and a smart OS – and where ALL user data is stored on a microSD card on different levels (i.e.):

The phone is dead? Just pull out the microSD card, plug it into a new phone and you are ready to go. So, obviously, there would need to be a standard on this to provide an interaction between different phones that come with the same OS (the requirements already sound a lot like the Titanium backup suite on Android). And the beautiful part about this setup would be that all stored user data is up to date – and not as of three days ago when the phone did a backup of some static data to the cloud.

How many of you have actually lost some important numbers with broken phones? How many have only recently realized that the numbers stored on a mobile device are also backed up online? How many are using SyncML services like Everdroid?

Phones die or “walk away”. Hardware can be replaced, software in terms of your own user data can’t and is the most precious asset of the 21st century in IT. So how come there are microSD cards on phones that are only used in a very restricted way?

(I also love my iPhone, but the current version of iCloud is some crippled piece of shit, just like iTunes).

Opened it up, so you don’t have to. 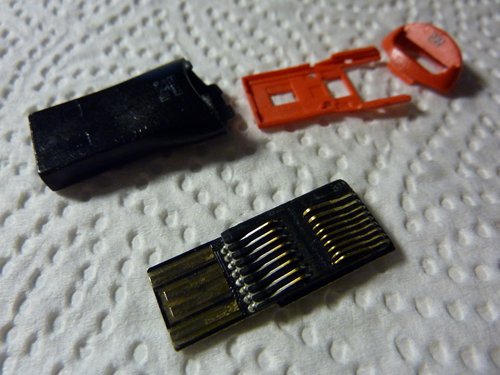 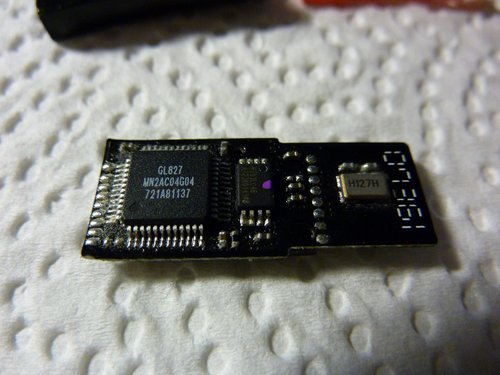 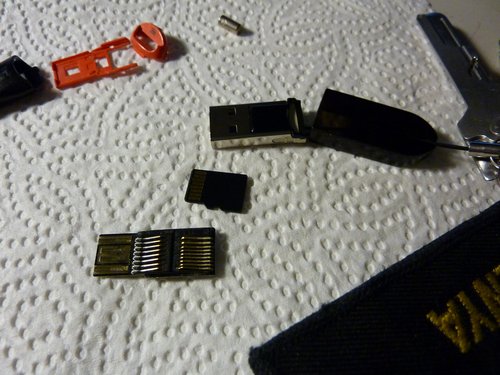 Old vs. new reader. I’ve used the old one for the last two years, and it never broken albeit being carried around in my right pocket, next to the keys. Also, the micro SD inside never got lost. Amazing quality.

I prefer these microSD card readers to conventional USB memory keys or even the key-type keys because they provide a slot for the microSD card from the phone. Now, the best option would probably be to have a key-shaped microSD card USB reader.

When was the last time you bought a compact audio disc (CD)?

I just can’t remember when I’d actually bought such an audio CD – maybe 2003 or 2004. These days I only receive them a gifts on special occasions or when the content isn’t available anywhere else (such as this nice Mendelssohn recording as pictured below). 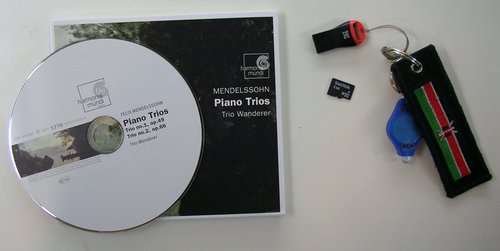 Today’s customers apparently prefer their audio entertainment to come in a digital format that can be copied onto a portable device and carried around. Sure, you can rip an audio CD and convert it into any popular digital audio encoding format, such as mp3. But then, also, there this study somewhere on the internet which concludes that many consumers these days don’t go for complete albums, but instead download single tracks online, either free of charge, for a fee from online shops like iTunes Store or illegal via P2P networks.

I’ve also changed my consumer behaviour on audio entertainment some years ago – as I saw my shelves filling up with CDs that needed storage space. What if I had everything (every single CD) ripped and converted into mp3 format for use on my portable mp3 players and on my computer? I don’t want to own many different physical pieces of recorded media (the CDs), but instead just want to listen to my music. So I did that and now only have a small 2,5″ external hard drive with all my music on it. And since I am not a big fan of iTunes or iPods, I just slot the above pictured microSD card into the reader (attached to the keychain), plug it into a free USB port on my computer and load some music on the card which I can then use on my Nokia N95 mobile phone (which also serves as my mp3 player). 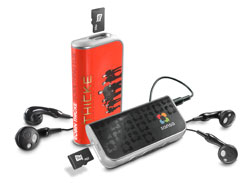 You may have heard that SanDisk – the manufacturer of these tiny memory card – has meanwhile come up with the idea of selling DRM-free mp3 files preloaded on such a microSD card, marketed as slotMusic.

It will be interesting to see how consumers will accept this medium and how it will substitute audio CDs. I think, many consumers just want to enjoy the music they’ve bought – either in an old-fashioned way (vinyl, CDs, cassette tapes) or in a truly digital format that’s playable on many different devices and may even be copied. 1 GB microSD cards currently sell for about 3,- EUR in Europe, come at the size of a fingernail, are hot-swapable (the keychain adapter is so sweet! I always keep a LinuxLive version on that 2 GB card) and still offer more memory space than conventional audio CDs.

Also, since even a 1GB microSD card is big enough for audio AND additional files, I think the real innovation here isn’t about giving consumers just another media format, but instead the provision of additional memory space which may then be used for videos or flash animations that can even be played on a portable player. So it’s not only about music, but the extra data contained on such a device that will probably attract customers in future and make the difference.

I know we also had VideoCDs or enhanced mutimedia CDs in the past, but nowadays many portable devices are also capable of playing any additional data (such as flash animations, text, videos, etc.) – so for the first time, this additional feature really makes sense.

From what I’ve read on the blogosphere and seen on TV about SanDisk’s slotMusic approach so far, many ppl are still sceptic as they are currently used to downloading their music directly online, or prefer a CD which they can play on their stereo systems at home. Also, since these microSD cards are really tiny and all look alike, it will be particularly interesting to see how SanDisk will solve these still open issues. For me as a consumers though, this new format is much sweeter than conventional CDs – also since I already own a device that has a microSD card slot.

I am currently using an 8GB microSD card on my N95 – and if I ever need more, I’ll just get another one. Getting the music transferred on such a card is just a matter of a seconds, which is quite convenient if you directly compare that with devices that only have a fixed memory chip (iPhone, iPod, Nokia 6500, and most older mp3 players). 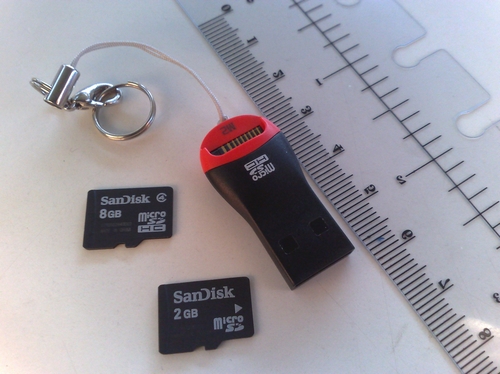 Please note the tiny card reader (about 1″ long) which will be attached to my keychain. This way, exchange of data will be much easier and faster and I can still use the “old” 2GB card as a portable memory stick. New 2GB cards currently sell for around 8,- EUR, so it doesnt really make sense to sell it again on eBay & Co.

The upgrade is just very sweet. It enables me to carry around LOTS of music (right in my phone = mp3 player) and to still keep enough free space for videos, images or even navi maps. 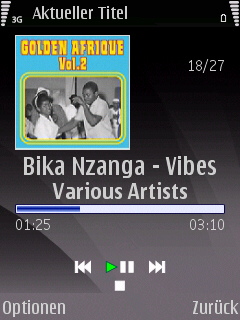 And since these card are hot-swapable, you can just flip them out and put in another one if you need more memory space.