My initial desire for the ultimate sheath began in 2004 when I got the (back then) updated LM Wave 2004 which was a massive improvement over the „Original Wave“. Bigger, wider, much more useful on the one hand, but on the other hand it came shipped with an awful Leatherman sheath made out of stiff leather. Now in 2018 it is still very stiff, not very useful. And sadly, the current Wave as sold in this Shire still comes shipped with a really stiff leather sheath that may look durable, but is a pain to wear on the belt. Who uses these sheaths anyways? And why can’t they make great leather sheaths even when they carry the “leather” word in their name? END_OF_DOCUMENT_TOKEN_TO_BE_REPLACED

The only reason I am posting the following is because I get terribly excited about multitools. Think of Apple fanboyz and you’ll know what I mean. I think it’s the EveryDay-Carry (EDC) syndrome – the need to have the perfect tool in your pocket.

EDC also reflects a lifestyle of preparedness, where the individual wants to be prepared for the majority of situations ….(…) People who carry EDC items have a mindset of planning ahead for emergency situations. (src)

Fortunately, I am not alone on this and there are others who not only visit EDC-forums, but also come up with detailed reviews on my latest purchase: the Leatherman Squirt PS4 (e.g. 1, 2 & 3) and even their own (and very smart) modifications (& here). Unfortunately though, my new Leatherman PS4 does not have screws but rivets, so modifications are very limited. The perfect tool does not seem to exist yet, but we’re getting closer with every iteration. 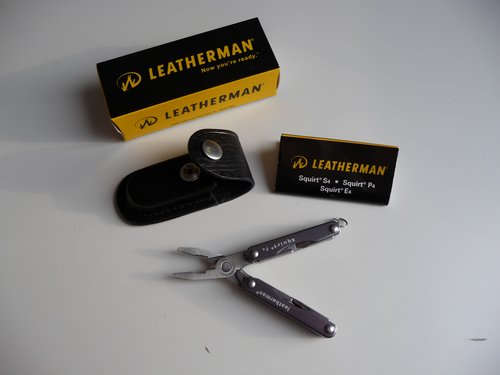 A Leatherman Squirt P4 I bought some time ago forwarded as a gift to her father. He really loves this one and prefers it to his older pocket knife. 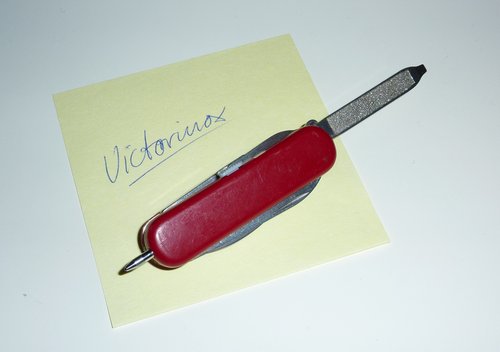 The Victorinox Manager 0.6365 I got instead of the LM Squirt P4. A very nice & slim pocket knife that comes with a pair of tweezers and ballpoint pen. Mentioned here because I think the perfect tool should also come with such a handy ballpoint pen and tiny screwdrivers. Also, Torx 5, 6 and 7 would be great!

I bought the LM Squirt PS4 (not P4) because it comes with pliers and isn’t that much bigger than the Victorinox. The tools I need the most are a) knife, b) screwdrivers and c) pliers. When I switched to the Victorinox in 2009, I also stopped carrying my LM Charge TTi – so I always missed the pliers. Hence this recent purchase of the PS4 which is a successor to the P4. 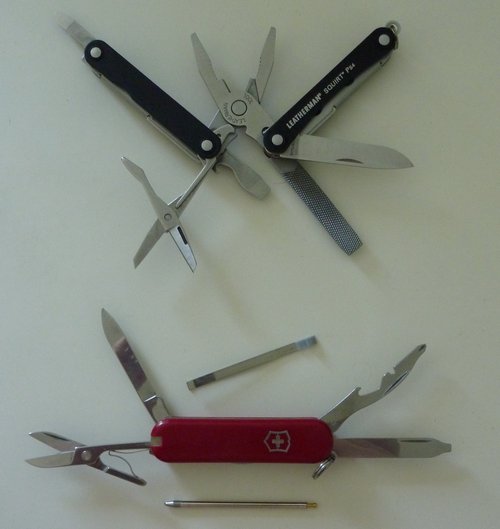 The quality on the LM could be a bit better. This also applies to the Charge TTi below. There’s a clear difference between the tools Leatherman produced some years ago and the ones they are selling these days. Victorinox clearly wins here, even though steel quality is equally bad. Sufficient for my needs, though. 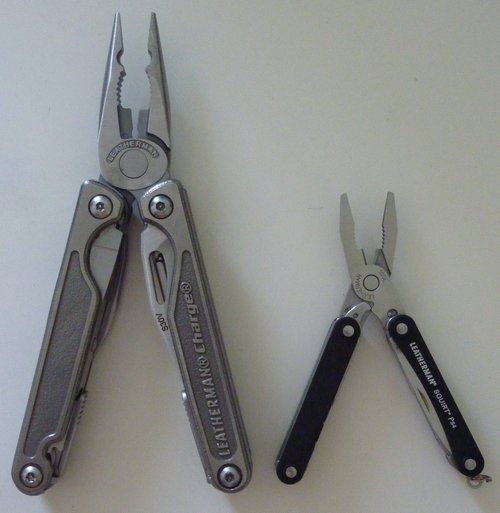 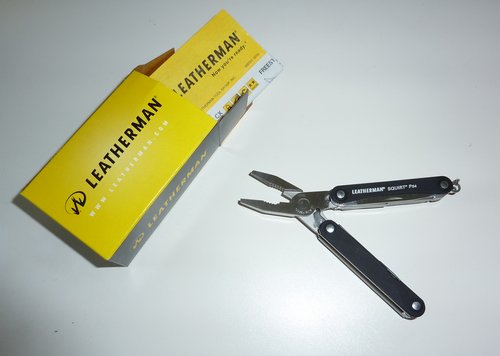 I’ve paid about EUR 20 for this LM PS4 and it arrived within only 7 days from the US. The cheap EUR-USD exchange rate probably is another reason for my love affair with multitools :-) 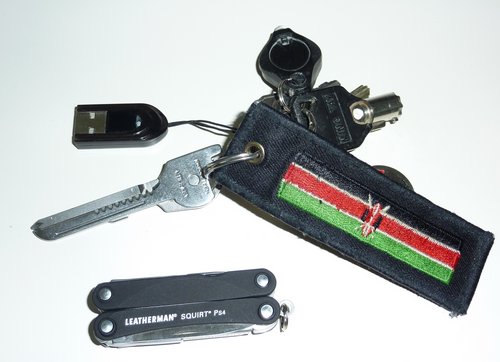 The real winner of my EDC concept is the Swiss+Tech Utili-Key 6-in-1 – because it looks like a key and is on my keychain. A great little helper that even passes through TSA while all other tools have to be stored in the luggage.

Are you also infected with the EDC virus? What’s your favourite EDC gadget?

I assume that about 99% of all knives and pangas sold in Kenya are Made in China. The remaining 1% are probably imported kitchen knives and/or multitools from the US and Europe.

Everyone who owns a knife probably knows that a dull/blunt knife is almost useless, so there’s a knife sharpening service available in most places like this one we’ve featured over at AfriGadget some time ago.

I also bought one of these rotating grinding stones from Uchumi (ex-supermarket chain in Kenya) many years ago (for Kshs. 265/=, actually) and have also been tempted to get one of these huge sharpening stones / hones for kitchen knives which also sold for something like 70 bob back in the days (they are much more expensive in Europe, btw – even though they are all Made in China). Sharpening a panga (machete) with a rotating grinding stone is “ok” – for kitchen knives the flat grinding stone (~ hone) is the better (and often only) alternative as you want to keep the angle of the edge.

This edge angle actually is the most important part on a knife, I think, at least when it comes to its sharpness.

Cheap and lazy as I am, I have in the past only used sharpening stones and other – cheap – sharpening tools that MAY work for the ordinary kitchen knife, but should NEVER be used on a hunting knife, or – in my case – a multitool. 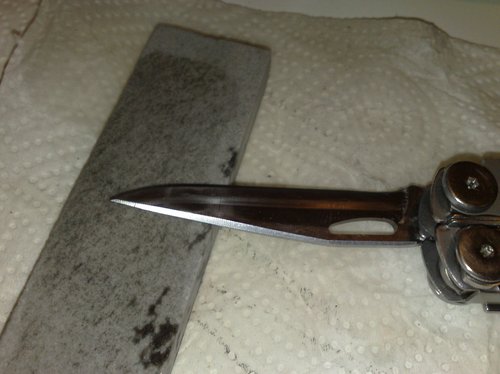 Just in case you didn’t know: the sharpening process itself is a peculiar task on which you’ll find various – dedicated – websites and forums that solely talk about how to best sharpen a knife. As far as I know, using a sharpening stone (with water or oil, sometimes also some polishing paste) is the best way to sharpen a knife. This, however, requires some basic knowledge on steel, how knives are usually made, what kind of steel was used on your knife and how this steel will behave under higher temperatures. Those Japanese kitchen knives (we have one at home from back in the days) for example are very sensitive to higher temperatures above ~ 160°C (of course, again, depending on the steel mixture it is made of), so you absolutely have to make sure the hone is cooled down and soaked in water anyways. The majority of all other knives in our kitchen are Made in Germany, which means they are not as sensitive as the Japanese kitchen knives and also keep their sharpness to some extent. They aren’t as cheaply made as the ones from China as I am yet to see a decent knife from China. My sister actually gave me a set of 5 really good kitchen knives from Zwilling, Germany, as a present during last christmas, and I have to admit that cooking really is a joy with these new knives. Good tools are a blessing! 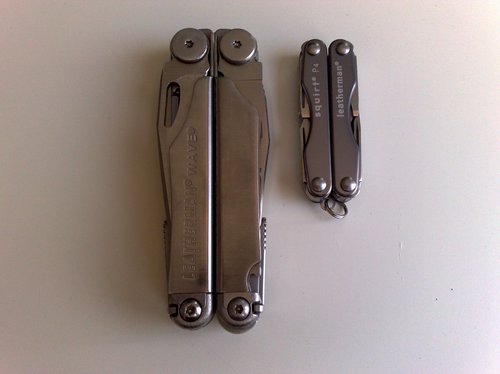 As mentioned, I am a Multitool guy. I have four Leatherman multitools (the Wave I, Wave II, Charge TTi and a small Squirt P4). You won’t buy these tools for their knives because, well, the steel used on their blades isn’t that great (except for the Charge TTi which comes with an S30V blade).

The blade on my Wave II lasted about four years until it became too dull. Stupid and unknowing as I am, I of course only tried the usual tools (Victorinox Sharpening Pen = horrible, knife sharpener from the kitchen, Arkansas sharpening stone) – thereby killing the edge angle on the knife.

Left with an unability to really sharpen my multitool to a decent level, I brought it to a “professional” shop – a very popular gun & knives shop in Frankfurt downtown. For some unknown reasons, these jerks completely fucked it up, killing the edge angle even more and returning a somehow sharp knife that looked like being sharpened on a high speed sharpening wheel. That’s exactly what I had tried to avoid on my Multitool, so I backed off and told myself: Argh….maybe next time. This was half a year ago.

Ok, so I may be too German on this, but there’s this moment when things just have to be perfect. You either do it right or never. So I ended up buying this GATCO Edgemate Professional Knife Sharpening System for a hefty EUR 47.95 today any idiot like me can use to regain the much needed edge angle on a blade. The guiding rods attached to the hones are inserted into the holes on the clamp and will then glide over the edge at a constant angle. Sounds too complicated? Here’s a video on it… 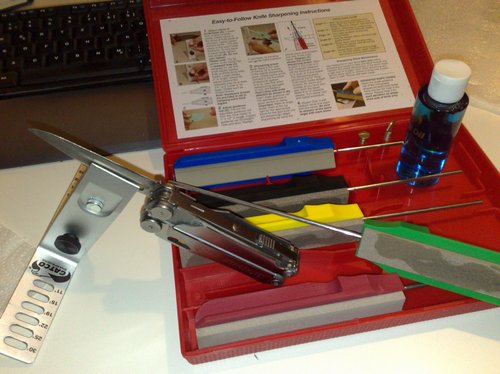 And you know what? These four different hones on a guidance rod just work and allow you to set an edge angle of 11°, 15°, 19°, 22°, 25° and 30°. There also is a fifth rod for serrated knives – my multitool also has a serrated blade. I’ve been able to restore the angle on my multitool and also sharpened a really dull kitchen knife with great success. I understand that this set isn’t meant to deliver razor blade sharpness (which would probably require another hone with even finer grit and/or paste and some leather) but for everything else – and especially for hunting knives – this set is the best idiot-proof choice. Something like EUR 50 are a lot of money just for sharpening a knife, but I believe that it is well invested money that will enable me to enjoy sharp knives and send all other useless sharpening devices into early retirement. 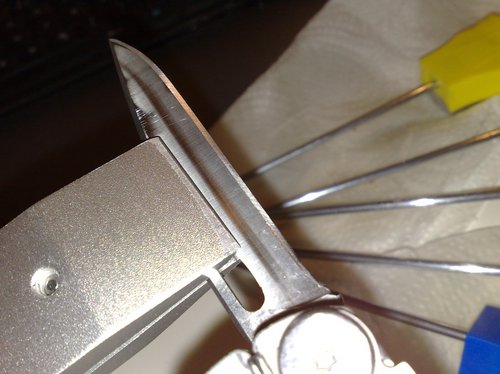 The blade on my Wave II during the sharpening process. The – still rough – 25° edge angle is already visible (all pics taken with a Nokia N95, btw).

UPDATE: I just received a call by the main Leatherman dealer/importer in Germany who asked about the knife on my Wave II and offered a free sharpening. Amazing! Told them I’d be glad to accept this offer and will send in mine asap the become blunt again.