“…the sudare is the thing handed down from their ancestor.” (src) 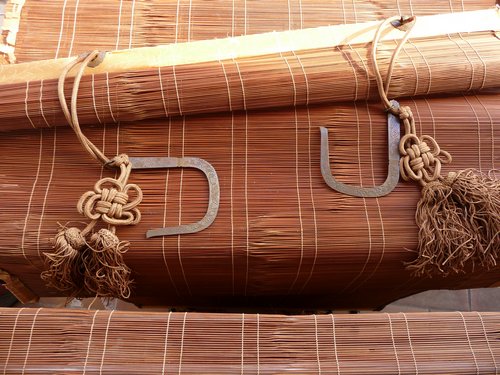 Found this nice quote on a website run by an artisan who crafts and repairs Sudare – Japanese screens. The same artist goes on explaining that:

“…the sudare is basically made from bamboo, but it can also be made from 3 to 4 other types of materials. The word “sudare” is characterized in Kanji by the combination of 2 kanjis: one meaning bamboo and the other meaning “in row.” So “sudare” means “lined-up bamboo.” Well actually, if we break the word “sudare” down, “su” stands for “lined-up bamboo,” and “dare” means “hanging down” because you hang sudare down from the ceiling when you use them. “

And that’s exactly what I am going to do with these screens: hang them up in our living room (in front of the window). 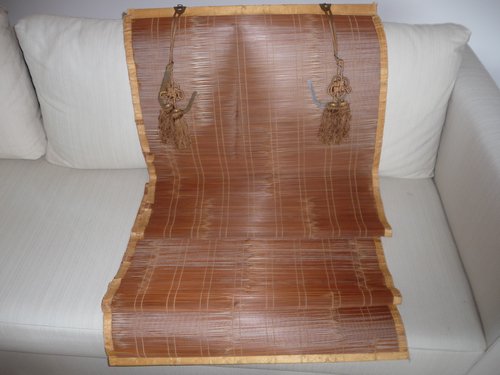 The interesting story and my reason for sharing this is that my parents found them on top of a rubbish container near our house in Tokyo some…30? years ago. An older house in the neighbourhood had been demolished and careless workers threw them away, so the Sudare(s) were free to be picked up.

There’s something about modern Japanese culture and how it conflicts with old traditions that would certainly make up for a lot of interesting blog posts. Fortunately, there are a lot of Japan-related blogs out there that cover exactly this transition between the old and the new worlds. 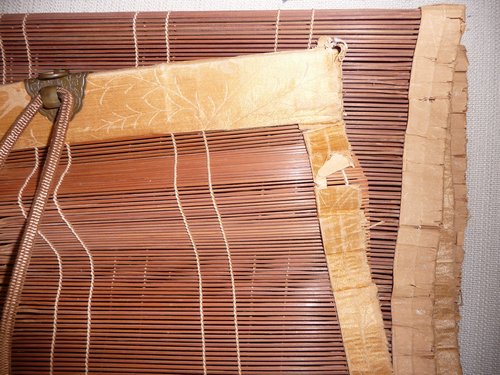 These sudare may look a bit worn out now, also because they were kept in a very moisture basement over the last 5 years, but the bamboo material is still in great shape and 100% ok. The build quality of these Japanese sudare is just amazing – even though they may be about 80+ yrs old!

I will buy some golden tape to repair the seam at the sides.

What you see here is my more or less successful attempt at making Daifuku-Mochi – “a Japanese confection consisting of a small round mochi (glutinous rice cake) stuffed with sweet filling, most commonly anko, sweetened red bean paste made from azuki beans.” 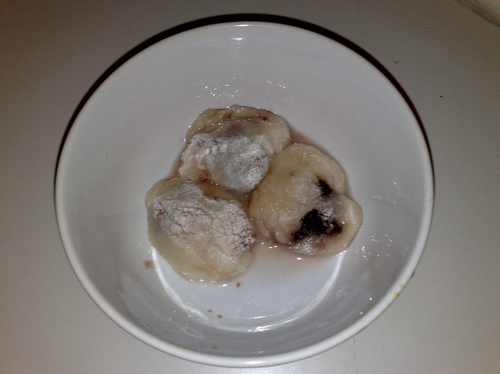 You know I’d found Mochi from Taiwan on sale at an Asia Shop in Seville, Spain the other day and was wondering why it isn’t sold in Germany as well (the red bean paste is sold though).

I used to make Mochi myself as a child – don’t ask me what kind of mochi that was (Japanese name for it?), but basically I would just mix glutinous rice flour with water, literally pound it until it becomes a homogeneous mixture and then form small balls which would then be thrown into boiling water. Once they’ve changed their colour from white to semi-transparent and floating on top, they’re ready. Just leave them to cool off and then dip them into a mixture of soja bean flour & sugar.

Note to myself: this is one of those recipes where Mr and Mrs Calories will come during the night and pull out their sewing kit to work on your clothes. Bad.

Anyways, this time I tried a Daifuku recipe I’d found on the net and mixed 150ml of glutinous rice (flour) with 150ml of water, stirr it in a heated pot until it changes its colour and then let it cool down. After cooling, form little balls (~ hush puppies) and fill them with red bean paste. Didn’t work out that well. I will stick to my old method in future and mix everything once it’s still cold, then boil it et voilá. There’s nothing more sticky than glutinous rice…

(Talking about calories, the current schedule is 2x/week running and 1x/week swimming – how plausible is this disclaimer btw? :-).

Being extremely bored by writing a paper on water quality assessment guidelines, which btw is something I’d rater leave to those who get a kick out of interpreting the European Water Framework Directive and it’s applicability in order to classify water bodies in Germany, I chose something else that I had been procrastinating for the last…uhmm….20 years?

Fixing a wooden cover on a Japanese stone lantern . 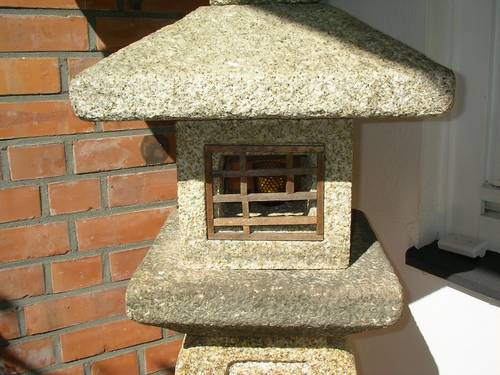 These Japanese lanterns actually come without such covers, but it somehow looks better and also reminds us of the shoji, a traditional “room divider or door consisting of translucent washi paper over a wooden frame” as found in traditional Japanese architecture. 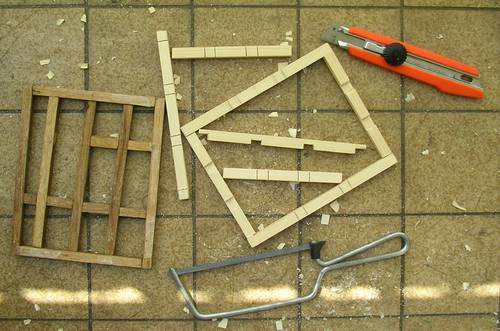 I love working with natural materials, and I sometimes think I should have chosen another path in my life. Doing an apprenticeship on carpentry, for instance, instead of learning to become an industrial manager & studies in water and soil management. Everyone can sell and work as a broker, but not everyone enjoys working with his hands. These manual jobs are a perfect retreat for those who are forced to work in an office environment, and, sad but true – I’ve seen quite a few comrades in civil engineering who could perfectly calculate the static equilibrium of a fixed end beam, but were hopelessly swamped with the simple task of hammering a nail in a perpendicular way into a wall. Obviously, such specimens of the academic world never enjoyed building their own toys during childhood .

The last time I built this wooden cover some 20 years ago, I actually didn’t give a damn about philosophy. That is: I was apparently using some fancy glue and nails. The result was and still is a horrible *thing* that used to work as the interim solution.

And now, after the Stone lantern travelled with us from Japan to Germany to Kenya and back to Germany, I thought it would be nice to eventually substitute this with something more adequately fitting the Japanese philosophy of perfectionism. Just as the Stone lantern is a piece of art, perfected into every detail, any additional cover should be made out of natural materials and proper joints such as the T halving and Cross halving as seen in the pictures. 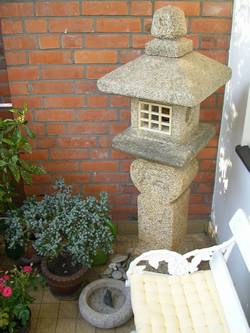 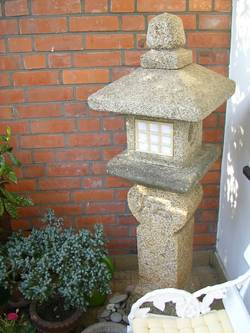 the wooden frame + covered with paper

When darkness sets in, the candle behind the shoji (let me just call it a shoji, ok?) begins to illuminate everything and that’s exactly when the lantern … looks good.

I sometimes wish to have a small Japanese garden somewhere. 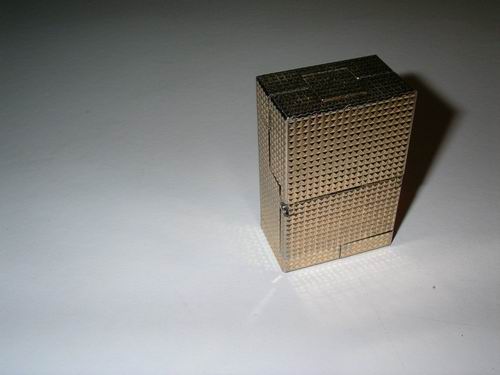 Yesterday evening I had a few drinks with an old friend of mine and someone came up, asking me about this little creature on my jacket: 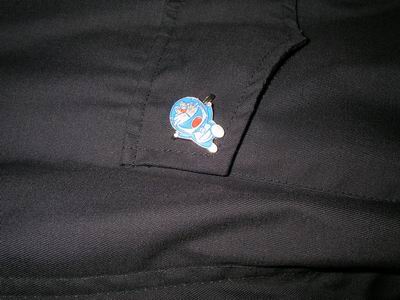 I got this little Doraemon button about 25 years ago when we were in Japan and found it again among my stuff a few years ago. Doraemon and I have seen many places meanwhile, you know?

So today I was surfing on Akihabara News and found a nice link to some guy who actually built one out of LEGO® bricks. Ohhhhh….kawaiiiiiiii ^_^ 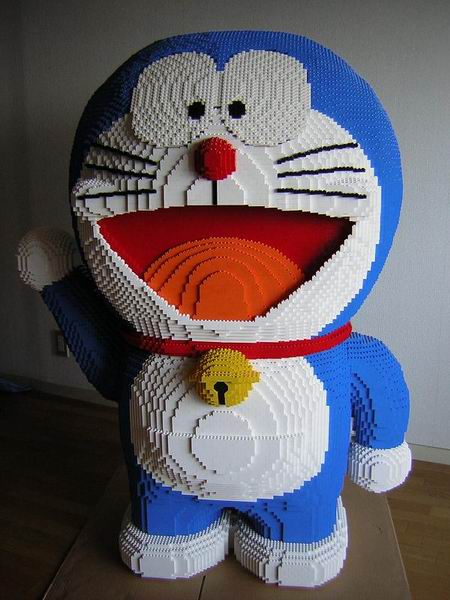 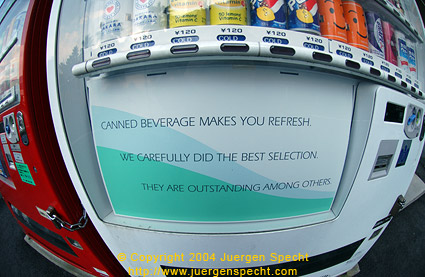