As already mentioned some days ago, I’d recently lost my normal (DSL) internet broadband connectivity the other day and urgently needed to get back online. So I quickly went for a Fonic SIM card (operating within Germany’s O2 network) which offers the cheapest (not cheap, but still cheapest) surf & go flatrate for UMTS / GPRS connectivity up to HSDPA (3.5G) (2,50 EUR / day). All other flatrates currently on offer either come with a 24-month subscription, or do not offer HSDPA (3.5G) speed.

I’d used the Fonic SIM card on the Nokia N95 – my mobile phone I normally use for another line. Fonic also offers USB UMTS modems made by Huawei – however, these external modems often sell for 60,- EUR and above (Fonic sells them for ~ 100,- EUR with a new SIM card). USB modems are nice, also because they connect to any USB device (desktop pc, notebook, netbook) – but they are still too expensive for me. Also, I do have a PCMCIA II slot on my notebook I’ve never really used so far (except for my Harry’s TV card which is still with Harry – ati bwana, diese Lösung hier ist auch für Dich interessant).

So I checked out eBay and found this really great offer where someone had this “Vodafone Mobile Connect HSDPA / UMTS / EDGE datacard” PCMCIA II card in an auction.. 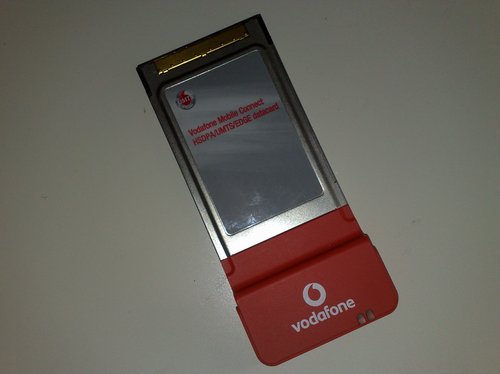 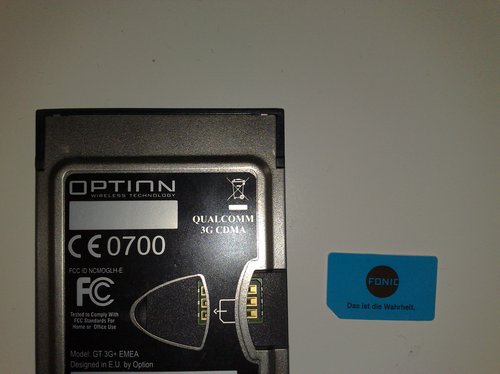 It’s a “Qualcomm 3G CDMA” PCMCIA II card, also known as “Option GT 3G+ EMEA”. Oh, and it also has an extra port for an external antenna, so this may be of particular interest to those who are living far away from the next base station.

Well…don’t be fooled by the Vodafone branding – this card isn’t SIM- or netlocked, and it will just work. Took me about 20 minutes to search for a valid driver package and programme to run it, and 3 minutes to install it.

The problem I had was that these Vodafone (T-Mobile, OEM, etc.) cards aren’t officially supported by Option, which is why I had to find a driver package for this card in the first place. 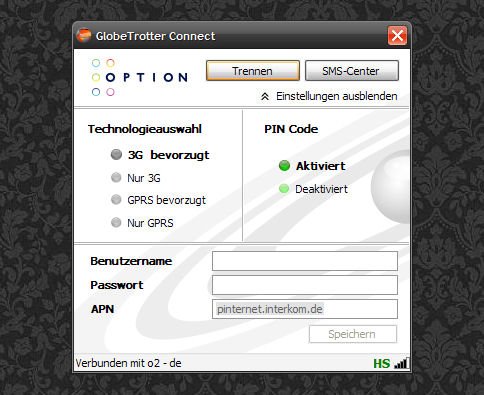 I’d previously used Vodafone’s 86mb package (Vodafone connect) to get the driver, but even after deinstalling it later on, I think the drivers are still on the system, so I can’t really tell right now if I am currently using the Vodafone drivers or the ones from this hidden Option Globetrotter Connect suite which is much smaller (2,6 mb vs. 86 mb). On the other hand, both software packages have drivers made by Option, so I guess they are all the same (except for Vodafone providing bloatware along with the plain driver package). [Update]: The above mentioned Option Globetrotter Connect suite is all you need. Install it, plug in this card, it will automatically select the drivers and you’re ready to go. Simple as that.

Another interesting alternative, and my initial reason for this blog post, is MWCONN – a really perfect little freeware (WinXP) access tool for mobile internet connections. Perfect, as it provides lot’s of interesting details to the running connection:

The whole setup still needs to be optimized and the speed improved (the network here currently only supports up to 1,8 Mbit/s, not 3,6 or even 7,2 Mbit/s). Also, since it’s based on a PCMCIA card, it will only work via PCMCIA slots (which is one of the reasons I’d thought about going for a used 12″ subnotebook instead of a 10″ netbook). But still – this internet connectivity is better than nothing + it is a dedicated solution that doesn’t require any swapping of SIM cards + carrying an extra cable for the phone as Bluetooth alone is too slow. Also, MWCONN on the other hand also has this *100# prepaid credit balance check built in – which makes sense because there’s no keypad as on a phone to type in such a basic command.

The only downside to MWCONN is the missing driver package, so if you’re cheap like me and into buying hardware only via eBay, just go for the Option package above. It really is all you need for WinXP. 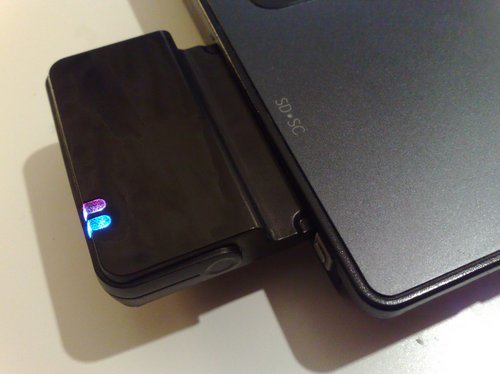 Vodafone sucks big times – and so does their branding :-)

Now let me see how it performs with Ubuntu 8.10…read somewhere that it is natively supported there. Which means: plug & play!

It just took me 2 minutes to get this thing online via Ubuntu 8.10 – out-of-the-box, that is. Plugged it in, chose the new network management tool, selected mobile broadband and entered the following data for Fonic:

Compared to all the stress I used to have with such toys back in the days, this setup just works.

Verdict: if you own a mobile device with a PCMCIA II slot and want to get online, don’t spend a lot of money on USB devices if you can also have it this way. Works with WinXP SP2 & Ubuntu 8.10.

6 thoughts on “HSDPA via PCMCIA”