Due to a more or less funny reason, we ended up being bila a working internet connection this morning – 1&1 killed the line within minutes after realizing that a bill of about 50,- EUR (for the 16k DSL line here) hadn’t been paid for by the landlord.

As money transfers usually take some time, I quickly realized I’d have to do something about this state of being without a working internet connection because I currently really need this access for research & work. 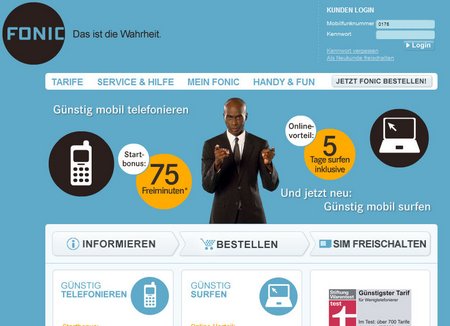 Some weeks ago, the German mobile phone provider Fonic (that resells capacity on the o2 network) introduced a daily flatrate, meaning: you aren’t charged 0,24 EUR /MB, but instead pay 2,50 EUR per day and can surf for as long as you want! The only limitation is that they’ll reduce the speed from HSDPA (!) to GPRS once you’ve downloaded more than a GB of data / day.

Now, paying 2,50 EUR/d for a whole month is too much (30x 2,50 = 75,- EUR), but you’re only charged for the days you’re actually surfing the net. So, obviously, this offer really makes sense for those who want/need to have a location-independent internet connection for a few days only, e.g. if you’re travelling around or if you’re DSL line is offline.

To introduce this offer, they started selling a Huawei E160 UMTS/ 3.5G USB stick, containing a fresh SIM card and with a microSD slot for the proud sum of 99,95 €.

Too much for me, but I do have a 3.5G-capable Nokia N95 which never really lived up this speed until now, as my other SIM card operates on the E+ network which does not provide HSDPA coverage.

Following my aged posts on how-to-use-gprs via Suffericom two years ago, I thought about covering my experience with Fonic as well. Also, I thought it would be interesting to see this direct comparison between Safaricom in Kenya and o2 in Germany – both networks that expanded their own capacity at a similar time. But while operators like Safaricom, Celtel and Zain do not have so much fixed-line competition, DSL via your old-fashioned telephone line is the de-facto standard in most German households. As a result of that, data connections in Germany are not as badly overcrowded as in Kenya.

Getting online via Fonic is quite simple:

I mean, for the first time ever this really just worked out (= out of the box!) the way I had wished for, so now I am happily browsing the net again and currently searching for a portable UMTS modem that I can use on my computer to substitute the phone (which I urgently need for the other line).

Fonic currently also has a special deal where you enter the telephone number of an existing customer and both – in my case: me & fellow blogger Mzeecedric – are rewarded with a 5,- EUR bonus.

I know that Fonic recently provided free (Huawei E160 surf stick) sets to some bloggers here in Germany. I may have missed that – but all I want is that it works – and right now it does that without any hassle. Let’s hope it stays that way over the weekend! :-)

Oh – did I mention that the Huawei E160 has an extra socket for an external antenna? These sticks are still too expensive here, but something like that is what I actually need. Or maybe a PCMCIA card (albeit being real battery drainers…).