That’s it. I am going to sell my 6 month old Nokia E72 QWERTZ phone.

Yes, it’s just a phone and “why should I read the following rant on Nokia”, you may be wondering. Here is why:

I mentioned it earlier that I had bought a 2G iPhone some month ago, with a broken screen and drained battery from eBay for 65,- EUR, which I managed to repair and have since been using. The iPhone may be a crippled piece of hardware and Nokia may have the best hardware on their phones (also in terms of durability), but there is just so much more I can do with this old iPhone from 2007 that I can’t do with any of my four Nokias (6230, 6230i, N95 & E72).

The iPhone (or an HTC Desire with Android OS) is my logical extension to the computer. Evernote, to name just one application, runs on the iPhone but doesn’t (natively) run on the E72. I am using Evernote to keep track of my notes, so I’ll need to have this run on a phone.

Flexibility is a matter of software support, not only hardware.

Consequently, the iPhone won. I am using it on a daily basis while the E72 slept in my drawers since February 2010. Time to sell it and sum up everything with this blog post. 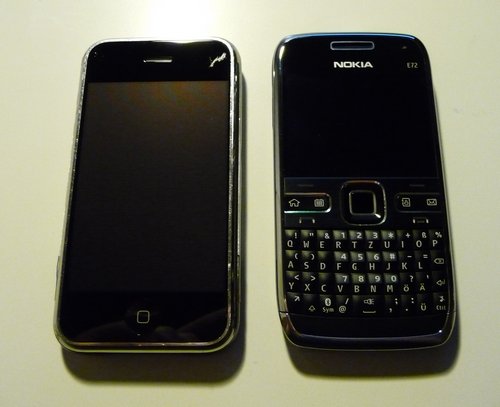 For simple stuff like voice calls or sms, Nokia phones are good. Even as a mobile Twitter device (Gravity) it rocks! …but for anything else than that, you’re probably better off buying a phone from one of their competitors.

This is 2010 and thanks to the iPhone and the undeniable revolution it brought to the market, any smartphone without “cool” software and a usable app store just sucks.

It’s not just the missing Evernote on the E72, or other missing applications. You know many ppl have been asking Nokia and their devs to port successful applications from competitors to the different operating systems in use on Nokia phones. No, with software I mean everything:

Please, Nokia, software is SUCH an important issue. You’re so good at hardware – why can’t you apply the same diligence to your software products and all related processes?

Also, I’ve realized that I’ve spent considerably more time trying to fix various software issues on my Nokia phones than on the iPhone. I actually do not have the time for such things, and also don’t want to fix my phone all the time and pull information from all over the internet on why application x does not work with firmware y or mobile z. This is really annoying.

There may of course be historical and political reasons for all of this (I know Symbian from when it was still EPOC16 on a Palm Series 3), but then: does this really matter today? Make it work! And don’t make we waste time on it.

My E72 came with such an office suite which did the job for me, but the e-mail client and – the E72 is a business phone – the browser just suck.

Nokia, seeing your customers and loyal fans complaining on Nokia Forums and on blogs about the performance of the e-mail client and browser is a NO NO. EI EI!

Cooperate with Yahoo!, install Gmail as default e-mail clients, ship your phones with the Opera Mini browser – do whatever it takes to fix this because a business phone with such an average e-mail client and browser just won’t be enough for us – your customers.

Or else team up with Android.

Ovi – Finnish for “the door” – should be a door to combined Nokia services. But – yes, you guessed it right – it still isn’t.

The Ovi client on phones sucks, sometimes can’t be deinstalled and has a very particularly BAD user interface. It may work with Nokia’s touchscreen phones, but for all other phones it just sucks.

I can’t explain all faults on Ovi, there is just so much wrong with it. I also can’t see what changed from MOSH (which by itself already was a bad joke). This piece of software – as an app on the phone  – just makes me want to hit someone with a Nokia 2110. It’s very frustrating. Very.

The most annoying Ovi bug, imo: You’re on Ovi.com on your computer. Ok, found a nice app, have a link to it sent to you via sms. Check your mobile, the link on that sms opens the web browser – so far, so good. But THEN the Ovi client decides to chip in and re-open it inside the client. This is very annoying, especially for those who are paying a lot of money for data traffic. Can’t this hook be implemened in the OS? => “All http://store.ovi.mobi links to open in Ovi client by default”. (my N95 runs on FW v35.x which was only recently released).

See the App Store on the iPhone? It may not be perfect, but hey – I’VE SPENT MONEY ON THE APPLE APP STORE. Something I would probably never be doing on Ovi App Store. And I guess I am not the only one.

On the other hand, it has to be mentioned that I somehow like the web version of Ovi.com. There may still be a lot of details that do not make sense to me on their website, but truth be told that their app store may be opened by anyone AND that it doesn’t open any client software like iTunes or only shows a crippled version of the market like Android.

Also, the Nokia Ovi Suite has greatly improved since it was launched, succeeding their PC Suite. Nokia is slowly getting there + iTunes is worse, I think.

This whole experience around buying software and interacting with Nokia via Ovi.com and its offered services – that’s the FIRST thing I would try to improve on as Nokia.

As a serious customer, I am not looking for a fun phone with lots of games, but instead a durable workhorse that will guarantee persistence.

Nokia is in a process of change, they’ve realized that revenue is made on emerging markets and that most of their top-level phones actually can’t really compete with competitors on all levels. A great camera, long battery standby time and smart design (“use with one thumb”) are very good – buy they won’t drive the masses to Nokia stores. The E72 was supposed to be a good successor to the very successful E71. Well, is it really?

Heck, they don’t even seem to have a strategy for emerging markets and still consider Africa and the Middle East as one market! Crazy.

Or their Bicycle Charger Kit which will be released to the market later on this year. You can read my thoughts on this in the comments at Julianas AfriGadget post.

On the iPhone, I can port my apps from the 2G to the 3G, 3GS and probably also to the iPhone 4 (even though some apps, like the new iMovie seem to be limited to the iPhone 4 for hardware reasons). Will this also be possible with apps I’ve bought for the Symbian 9.3 S60 FP2 platform (e.g. the E72)? Will I also be able to use them on future Nokia phones?

The Nokia E72 may be great phone with good hardware, but it currently comes with only average software (except for Gravity) and looks like a dead end street to me. It also doesn’t help that Nokia is very innovative in their Beta Labs, ships new phones with free navigation (thx, Nokia) and a full range of accessories you’ll have to pay extra on competitors.

Nokia has missed to communicate a clear strategy to its customers. Maybe they should pitch us, tell us why their phones are better than the rest. And prove it with cool software that teams up with the already awesome hardware. Right now, I can’t see a reason for the purchase of their phones. There is no persistence in the software side of their products, and my patience with and passion for Nokia products is gone.

What will you do about it, Nokia? 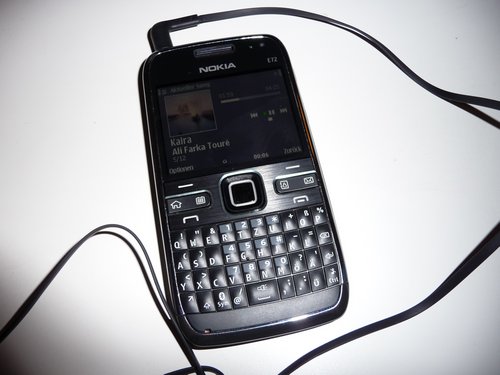