I’ve been meaning to post this on my blog, even prepared a post in German, but then realized that 50% of the post is a rant on Nokia and decided to rewrite/repost it in English.

So, the following is a list of iPhone Apps which are running on my iPhone 2G (reassembled from scrap), and which should also be available on Android 2.x (and which may already be available). Thought about documenting this private list offline, but then: why shouldn’t I share it with you?

There are about 140 apps currently installed on my iPhone 2G – some really good ones, other just very average – but the ones from the list above are the ones I use on a regular basis. 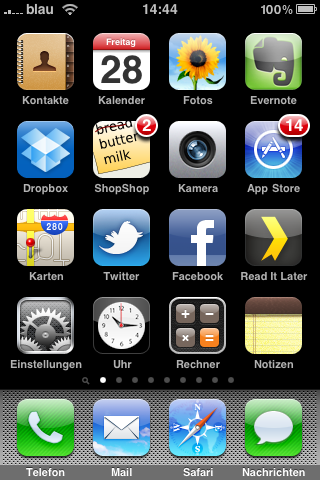 I also don’t do games (except for Labyrinth2, BiA or NSFU) because most of the time when I am bored and pull out the phone, I rather use Twitter, Facebook or ReadItLater to check out news.

I think my next phone will be an HTC device, running an instance of the Android OS. I also like the iPhone and will keep it for the moment until the functionality of all apps mentioned above is also available on Android. I’ve even accepted iTunes running on my Windows machine, which used to be a no-go for a very long time.

I am thinking about an HTC device because I miss the good camera from my Nokia N95 (& E72) on the iPhone. A flash would also be nice – and since Apple obviously won’t deliver, it’ll be an HTC device next up.

Nokia? Maybe when they’ve returned from the current chaos.

Being a hardware guy, I think it’s interesting to see how I’ve switched my preferences to some extent from good hardware (Nokia) to the availability of various software products (Apple).

One thought on “En attendant Android”