I am a Windows XP user.*

Please excuse the following rant, but I will try to explain why I’ve stayed with Windows XP – until now, that is. Feel free to comment further down below and convince me of something else.

Operating system: As long as it works fine, doesn’t require broadband connections due to frequent updates, won’t become infected by malware and on top of that also runs my favourite applications, I will make do with anything. I know that Windows XP is very prone to malware, but it does the job for me. At least compared to the following OS:

Windows 7: I actually have a fresh copy of Windows 7 which arrived via snail mail a few month after the purchase of my HP Elitebook 6930p notebook. Installed it in a VirtualBox, didn’t like the new menu, couldn’t find a way to switch it off, saw some external solutions to retain the old school menu. *May* switch to using Win7 one day. Not yet convinced why I should, though. I am the kind of guy that switches of Compiz in Ubuntu.

Apple OSX: doesn’t run on my machine, too expensive hardware + I am a typical Windows user = maximizing all windows + some things on Apple machines that I don’t like (even though I’ve understood that a smaller choice of available software tools isn’t necessarily a bad option as it saves you valuable trial & error time). I’d switch to Apple for Final Cut (Pro), though.

GNU/Linux: first experience with it ~SuSe 5.1 in 1998?, tried different distros over the years (like everyone else), eventually settled with Ubuntu because ….well, I am a Windows XP user! Also: I’ve accepted Gnome as my desktop.

You see, I am currently writing* this blog post inside an out-of-the-box Ubuntu 9.10. Firefox 3.5.7 is installed and deletes the complete row of characters (inside the WP’s tinyMCE editor) if I don’t pay attention. Already frustrating enough when an OS doesn’t do what I want it do – or worse: does more than expected. Not a good start. And then there’s this screen issue I am having: I just can’t figure out why this ATI Catalyst Control Center won’t start in admin mode. I urgently need to turn the 22″ monitor into the main screen (with taskbars on it). How do I do that? Sure, I could consult one of the many Wikis on Ubuntu and get it to work (Update: it is “sudo amdcccle”). Another issue: the DVB-T usb stick which doesn’t work at all within this Ubuntu 9.10 (I remember it used to run in 8.04 on my older HP nx8220 notebook but not really sure about it now. I do have another, older DVB-T stick which worked with Me-TV in 8.04). Or the internal UMTS modem which is kinda tricky because it requires extra firmware, presumably because it can adjust to local 3g networks (the trick is to have a tool which extracts its firmware from the Windows (!) driver and then loads all required settings). All of these things make me want to reboot my PC in Windows XP right now.

Heck, I couldn’t even switch to using Ubuntu all the time and would always have to run WinXP (full or in a virtual box) because my clients (!) also use WinXP. E-Mail clients and the browsing experience are adjusted to my clients (aka typical corporate IT setup). The other day Mzeecedric and I worked on a blog, and then we had to start all over again because it just didn’t look good on MSIE 7.x (while it shined like a beauty in FF 3.x @ Ubuntu 9.04).

Power management is also one of the reasons why I am using WinXP HOME (which otherwise is a no-go) on my Asus eee PC 1000HG netbook. The netbook also runs an Ubuntu distro with eee control applet, but it’s not the same power management as when running on WinXP with all Asus drivers and so on. Power management is a crucial issue on mobile devices though.

What I am asking for: a GNU/Linux distro, specifically adjusted to this HP Elitebook 6930p. Put it in my DVD drive, boot it up, install and have it ready to go. No further adjustments necessary and everything (EVERYTHING) just working out of the box. I’d be willing to cough up money for such a CD as I think it would be a good investment. And yes, I do understand that part of this Ubuntu experience is to find answers and check Wikis on my own, but then: I just want to work with my computer and have it ready to run, even in offline environments where there is no broadband or stable inet connection. Plus I am getting older and don’t want to waste time on my machine for stuff that I am taking for granted on my Windows XP installation. And I am saying this as a WinXP user, not a Mac user (most of my Mac friends aren’t geeks).

…by (the benchmarking tool) HD Tune, telling me that almost all of my USB flash memory sticks aren’t bootabooool.

Well, apparently they are indeed able to supply any recent computer with a fresh copy of e.g. gOS – a new OS based on Ubuntu 7.10 + featuring lots of Google web apps. 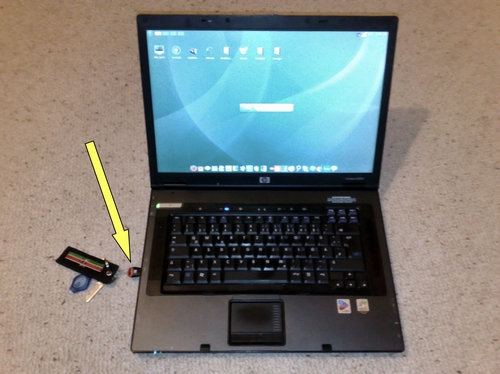 Just plug it in and start your computer with the latest release of [put your favourite OS here] – for inspirations, check out pendrivelinux.com

Reasons for bragging about it this way is that I am still amazed at this tiny 2GB microSD card inside the USB reader (see yellow arrow) and that it actually provides my machine with a very sexy-looking OS within a maximum of 20seconds boot-up time. And all of this at the size of a fingernail! (<== no, not those nails that have at one time been very popular with guys from Nyeri…)

Again, the provision of WinXP rescue kits, portable apps or even complete OS on a USB flash memors stick may just be the right extra income for IT students. Given that not everyone has his own machine, a USB flash drive may just substitute that need for virtual desktops.

Maybe one day we’ll only see ppl using terminal-like stations where all private data is stored on a USB flash stick if not remote on a central server?