Two days ago, someone on my G+ timeline published a post and some photos of a stray dog they had found earlier on Wednesday morning – with a limping leg. A quick visit at a veterinary clinic revealed that the dog has a broken leg and urgently needs some surgery. Expected costs: 500-600 EUR. 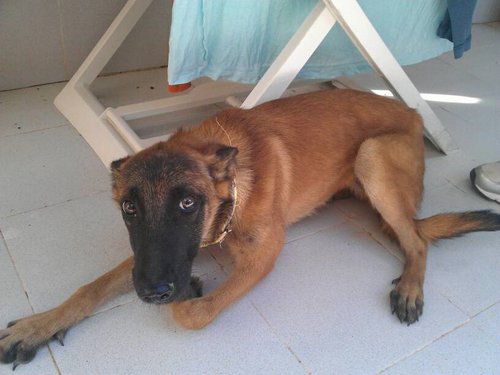 So we were asked for donations and I did that, donated a small amount (via Paypal). You can do the same if you’d like to and can afford it.

Now, the person behind this G+ post lives in Spain, is probably German with Spanish roots and I’ve never met him. So why should I donate anything to a foreigner I’ve never seen “in real life”?

In February 2010, I posted this item called “offline/online” on my blog, asking my readers: “how important is it to meet offline? Does it change anything? Would you continue working with your online contacts if you were to meet them offline?”

When we told this story to my (probable :-) father-in-law, his first reaction was: “…but you don’t know him! Maybe he’s trying to con you?”. I am sure my sister and my mother would react in the very same way.

Eh, if you grew up in Nairobi, you’re used to folks trying to con you. Or trying to milk your pocket just bcs you live in a bigger house.

And still I gave some of my hard earned money to a stranger. For me, this time it’s not (only) a matter of sharing or giving because you can or because I felt sorry for the dog, but to prove that even these pure online connections matter as much as meeting somone offline. I am following this user on G+ for some time now, read his posts and that’s enough reason to trust someone. For me, that is.

Someone else from the German blogosphere even wrote that “this is how Social Media works”. Amazingly true. A network purely based on trust. Some things will never change, and while these “trust” networks obviously work in other cultures (Dabbawalla in India or Hawala in Somalia), this Christian part of Europe is still having problems with this modern form of trust. But why?

(I just realized that “Tumaini” is a recurring issue and post title on my blog :-)

One thought on “Tumaini”