Today I read an interesting story on the efficiency of the so-called Dabbawallas in Mumbai (Bombay), India:  >> The “Dabbawalla” system that operates in Mumbai is unique and incredible in the complexity of its task, simplicity of its operation, and surprisingly low error rates for a system of its size. It is a daily service in which thousands of men carry and deliver over 200,000 lunches every day, within a three hour block of time, across the city’s 70-kilometre stretch, with each lunch box (dabba) changing hands at least four times. << 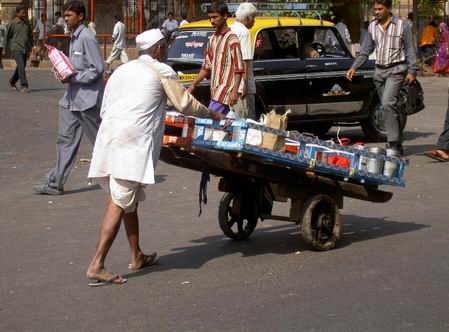 >>In fact, the American business magazine Forbes gave a Six Sigma performance rating for the precision of dabbawalas. This rating indicates a 99.999999 accuracy percentage of correctness, meaning one error in every six million transactions — an astonishing (and perhaps unbelievable) degree of exactness.<< Some Dabbawallas have already been invited to lecture on their daily trade. And, to round it up, celebs like Prince Charles or even Sir Richard Branson went to Mumbai and spent some time with these diligent workers.

And there’s the Hawala system we all heard about – most notably since 9/11. This informal value transfer system that goes by the name of Al-Barakat in Somalia and which has been declared illegal by the Bush administration and other countries. Even Interpol has been lured into the debate and officially believes the Hawala system to play a role in money laundering (well, obviously there’s a point in that one).

Basi, what I do LIKE about both systems is the basis of their functionality: SIMPLICITY & TRUST.
As for the simplicty, I strongly believe that we should always strive to keep things as simple as possible. And what about the TRUST?

Why do we need a rating system on Ebay? Why do I need to pay for banking fees if I want to send money from here to XYZ – do I pay for the service or for the trust? Why do most religions in this world tell us something about loving each other, we’re fans of fictional worlds like Star Trek with its one-world idea,  we go out eating and thereby trust some unknown wapishi (cooks) etc. etc… and yet we’re told that you can not trust the whole world. Why? Because the world, we’re told, is evil. Woiii?!

I think it’s about time for this world to sit back, relax for a moment and reflect what’s really important. I don’t want to think about things like trust when I do business or talk to a stranger. Those values should be taken for granted. I would like to see this basic idea of trusting someone implemented in our western world with such a normality we find on those described systems like the Dabbawalla or Hawala. Yeah, that would be nice.

p.s.: I titled this entry Ghar Ka Khana (~ good food, home-cooked Indian cuisine) because, instead of simply going to a restaurant for lunch, those downtown employees prefer (trust?) the food their families cook for them. The German part in me of course suggest that they should take their food with them once they leave home in the morning, but uhhm, well, if there’s a market for such services…

One thought on “Ghar Ka Khana”