It’s a strange situation because I am already an Android user these days for the phone side and really appreciate the freedom (and costs!) that come with it despite Androids downsides (my main criticism is that there are no vouchers available for the Android app market as opposed to the iTunes store => +1.85% on each app purchase while using my EU credit card). 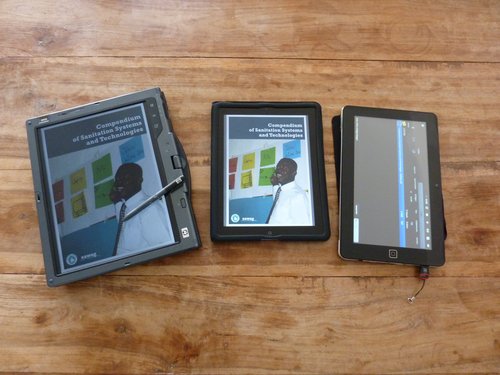 My beloved HP tc4400, the iPad2 on iOS5 and a FlyTouch 3 Android 2.2 tablet that still lacks a PDF reader because it’s already on auction. The FlyTouch btw also has a 1024×600 screen – as opposed to the other two that offer a 1024×768 screen resolution. Good for movies, bad for PDFs.

No, there’s much more to an iPad, obviously, and probably also more than enough reasons why over 29 million (!) iPads have already been sold till now. A “tablet revolution”? No, but a tablet revolution based on the iPad – that’s for sure.

I am used to buying second hand hardware and this time I am glad I had found a way to finance this purchase (via a mobile phone contract = subsidized hardware) and with the sudden loss of a dear family member earlier this year, I also realized that life is indeed too short for crappy products. Why should I waste time with stupid hardware if instead I can also go for the real thing?

This very emotional reason probably is the most honest excuse for this purchase, but you know what? Clicking that “buy” button felt damn good. Whatever they say about Apple products and their fanboyz – it’s true, it’s a *feel-good-world*.

So why should I still blog about this purchase if 29 million out there have already made this buying decision? Because I have a smart list that matters to me. Here’s my TOP5 reasons for the purchase:

Passion
After watching this documentary earlier last month about former Microsoft employees, it eventually occurred to me that most MS products just lack passion .

This is exactly what I like the most about these portable Apple products: a meticulous CEO that demoed his products and also looked at the smallest details.

Or Linux developers who create stuff out of passion. Not because they have to, but because they want to. That alone is a totally different approach and a sign of quality to me.

I am yet to see that on MS products. And I am a Win7 user most of the time, along with this crap called Outlook 2007 (HTML rendering, bollocks!).

And it’s not just the software you can buy. Just yesterday I read through this publication from Microsoft Research on the need for meta data to be implemented in future generations of filesystems. Very valid points and I understand that MS Resarch are doing good work, BUT! – again – the paper was much longer than necessary. So much blablabla and yet the important stuff could have been said on one single page. This out-of-focus-approach is so typical of MS, I think. As a customer and user of MS products, I don’t feel any passion in their products and meanwhile also believe that many lines of code on their OS & apps are just random data.

Hence: any company that shows a passion with their products is highly appreciated. A passion to deliver good quality.

Reader
I think the iPad is the best reading device. Why? Because I can not display most of my PDFs on a 7″ eInk display without constantly zooming in and out. So as long as eInk readers aren’t running a bit faster for this purpose, the iPad is the better alternative to me at the moment although I am sure we’ll soon see more 7″ devices.

The Amazon tablet(s) would have been an interesting alternative to me, but their 7″ Fire tablet isn’t even available here! In my opinion as a customer, if you can’t launch/ship global, then don’t even launch it for a single country. You can do that for Japan, maybe, but not for the US that are so connected with the rest of the world.

Apps
There are SO MANY apps available for the iPad. In fact, most publishing houses in Europe ONLY offer iPad apps for their print products. No Android app, only iOS. Sad, but still the bitter reality. Because I’d also be happy with a competitve (and available) Android tablet.

Talking of Android tablets, my friend Dave recently got an Asus eeePad Transformer TF101 and – as a pilot for an international airline – tried to pick the better alternative. Unfortunately, his tablet already broke after only two month and his biggest complain was the lousy App situation for Android Honeycomb (as compared to the iPad, of course, which is hard to beat). Dave – go and get your iPad. Now!

Adrian – I missed my chance to get an HP TouchPad for 99 EUR. I reckon that it would have been an interesting PDF reader and surfing device for me.

Runtime
Battery runtime on the iPad is just totally crazy. It’s long enough to get me through a day at a BarCamp and that’s all that matters to me.

Also, 29 million customers enable a fabulous aftermarket. You’ll find plenty and cheap chargers as well as other accessorries on eBay, on FocalPrice and so on.

Portability
I remember when Eric told me about his daily trips to the office through Nairobi traffic and mentioned how the iPad actually is the solution to his mobile office.

Just look at how many of us laughed about the iPad and its limited capabilites back when the iPad1 was launched. And now we are even using it to have a mobile office and a quick device for that daily “lemme google that”-moment.

Sure, the iPad2 is heavy and we’ll probably all complain about the size once there are more 7″ readers/tablets, but after my previous experience with a 8.9″ and a 10.1″ netbook, I know for sure that 12″-14″ is the best laptop size for me and that this 10″ tablet does it for me atm. 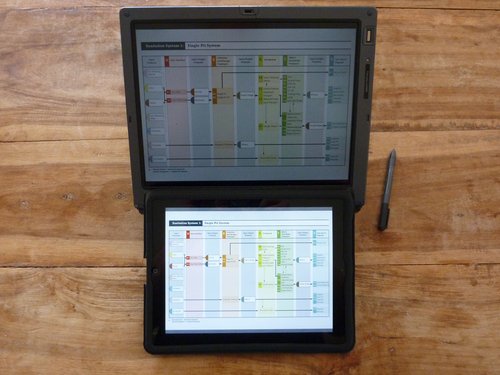 I am not yet ready to fully convert to the Apple world (+ Ubuntu is cheaper anyways :-), but this lack of passion on MS products certainly is a very valid reason for me. It’s also kind of ironic that Bill Gates himself is very passionate about his philanthropic foundation for this passion has already enabled so much good work (the BMGF are imo doing a very good job by financing smaller projects). I wish some of this passion could also reflect back on Microsoft and that their future tablets with Windows 8+ will provide a suitable alternative. But atm, I highly doubt that.