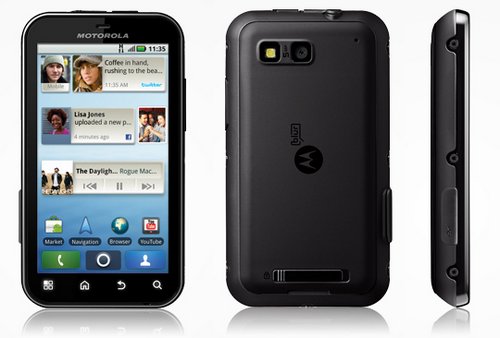 I bought this Motorola DEFY mobile phone today. It’s my first Android device and I am still to find out if I can get along with its operating system, the available apps and the user interface. I’ve picked this model (and not the HTC Desire / HTC Desire HD / Samsung S / Nexus S, etc.) for the following reasons:

What I miss is a docking station, and/or the USB socket at the bottom of the device. I’ll have to open the flap that covers the USB port (on the left side of the device, see pics), which is a bit annoying. The iPhone (or the HTC Desire) clearly wins here. Obviously, there’s no perfect phone out there.

Oh, and you can buy this mobile phone holder (yeah, simu holdaaaaa!! :-): 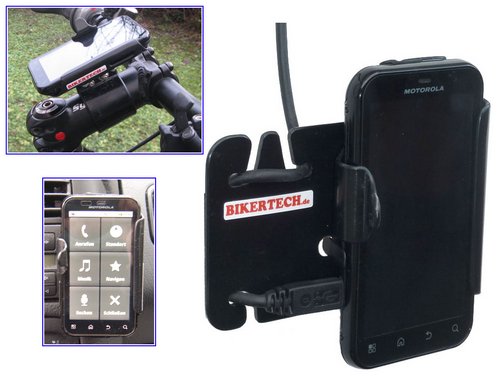 …. which will probably attract Enduro-fanatics like Bwana Whiteafrican or Bwana Mzeecedric who need tough gear for their motorbikes.

This mobile phone holder for bicyles and motorbikes is available via bikertech.de – the above image is (C) by them. The guy who runs bikertech.de builds these holders one by one, they are all hand made and can be adjusted to any specific requirements. Love it! In fact, seeing this pic finally nailed it for me. I can’t imagine using an iPhone in an Otterbox case (which are awesome, see their review from my Nokia E72) on such a holder. But the DEFY? Of course!

Anyways. I know the DEFY won’t be the ultimate phone, and probably also not be my last one. If it proves to be as reliable & versatile as the iPhone Classic, I’ll be more than glad.

UPDATE: After receiving this phone, checking out Android, installing a lot of apps and slowly understanding what makes Android so special, I realized that the simplified car menu (see bikertech image above for an example) that gives you access to basic functionality is VERY nice and convenient.