I remember way back in 1991, my sister had this sudden affection for Twin Peaks – the more or less famous mystery serial drama by David Lynch/Mark Frost. 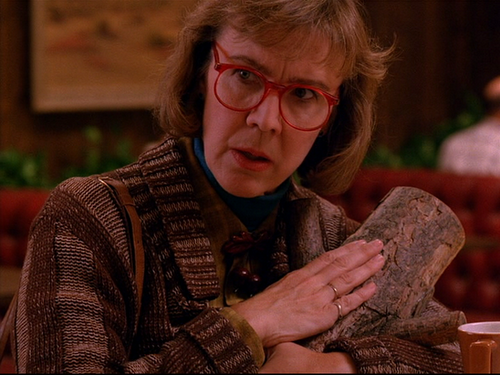 While growing up in Nairobi, living more or less under a rock when it came to video entertainment (which, by that time, consisted of a) renting videos from the various video libraries in Nairobi as well as b) asking visitors from abroad to record MTV’s Alternative Nation for my special music needs), I never really got into this Twin Peaks thingy back in 1991 & 1992 during a holiday trip to Germany.

Years later on I watched with great pleasures his other works such as Mulholland Drive or Blue Velvet . Little did I know by that time that I would one day engage to a woman who is some sort of a REAL fan of David Lynch’s work.

My fiancée LOVES Twin Peaks, has all of it on DVDs and VHS, heck she even has this special Dale Cooper diary on tape. Needless to mention she initially fell for me because I apparently reminded her of (the main character) FBI Special Agent Dale Cooper (14yrs ago, maybe).

So, after about 20 years of its creation, I eventually spoiled my Twin Peaks virginity and started my video trip into the world of Twin Peaks and its characters about a week ago. And although I’ve so far only enjoyed 22 of the available 29 episodes (+ the prequel film called “Twin Peaks – Fire Walk With Me” ), I can already tell you that Twin Peaks really is some of the finest mystery/drama stories on film.

Sure, we’re in 2010 now and there may be other – also popular – mystery series available on TV, and Twin Peaks may have started this off back in the days, but as opposed to Fringe, Lost or even the X-Files, there’s already sooooo much more to Twin Peaks a fan will love about it that imo will never happen to most other series:

Damn good acting, coupled with a timeless beauty and some weird stuff only a freak like David Lynch can make up (and find a producer who secures the funding for it).

“The owls are not what they seem.” is a quote from Twin Peaks – and much like most other characters, sceneries and items mentioned on Twin Peaks, everyone and everything has at least two different sides. I like that because there’s no single truth out there. Something like that makes you think about it – and lets you compile a blog post on it 20 years after it was first mentioned on TV.

The internet seems to be full of tributes to Twin Peaks. The following may be a bit different. Enjoy!

I’ll Be There in Twin Peaks from Mashed in Plastic on Vimeo.