My new HP 6930p laptop unfortunately has an issue with the display latch (which is a “known issue” with this series) and also is very picky when it comes to accepting the docking station, which is why I called HP customer service last week and made use of the 3yr warranty it came with. Let’s see how HP performs – someone from UPS is supposed to come today and pick it up.

So…..since I actually need to have a working machine in my home office, I pulled out my Asus eeePC 1000HG netbook, removed the battery and connected it to my 22″ TFT and an external mouse & keyboard, a USB hub and a LAN cable. 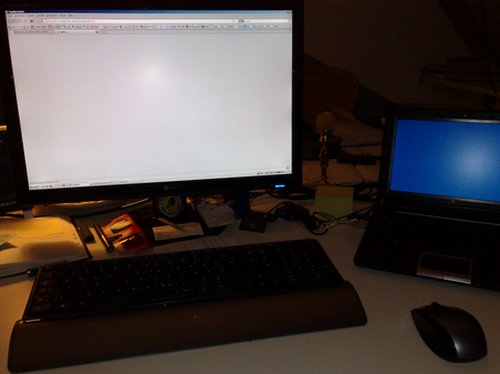 Reason for blogging this is that I recently wrote about a netbook being a real AfriGadget as it could serve anyone who needs to have a light & flexible computer that’s good enough for most basic tasks. And it is.

Since I was in a hurry last week, I pulled out the WinXP recovery disc and installed WinXP on it – thereby killing my previous WinXP & Ubuntu dual boot setup. But then…I just need it to work out-of-the-box right now and it seemed to be the quickest solution, so I won’t mind about the 160GB harddisk being split into two partitions now – instead of five. Asus Recovery DVD is some piece of sh…..as it doesn’t provide clean installs of the shipped WinXP Home (I had previoulsy partioned the HDD with PartedMagic – resulting in a Grub error..ah, well..).

So, WindowsXP Home. It could be worse.

Is this Netbook strong enough for a 24/7 job, substituting my computing needs on a 90% desktop, 10% mobile basis? Yes!

It’s an interesting question, also since Erik of WhiteAfrican.com recently complained about his Acer AAO netbook he had to use while his MacBookPro was in for a repair. The tiny 10,1″ screen on the netbook itself is a joke if you seriously need / want to work on it. However, being connected to an external TFT (and supplying both screens at the same time) and an external keyboard, things are A LOT easier and turn this little toy into a serious machine. The integrated graphics solution is even strong enough for a quick session in UrbanTerror. Sweet! My eeePC 1000HG also comes with an integrated 2G/3G modem, so it is a really mobile machine (provided there is network coverage).

For as long as my new HP laptop is under repair, I will have to stick to this netbook and use it on a daily basis. It will be on and online every day (= about 18h per day), enabling me to see if a netbook is really strong enough to survive all of the given tasks. I will also go on a vacation soon and take the netbook with me. I am already very curious to see how it can perform on the road – I did my AfriGadget presentation on it as well, so I already know what it is capable of.

Another motivation for this experiment is to see how much computing power I actually need most of the time and to “make do with what is available“. I already like the almost inaudible integrated fan and the fact that it doesn’t become too hot (for some reasons which are probably related to battery charging, it is actually much colder now compared to when it runs on batteries or when the batteries are being recharged – interesting). As for the tiny screen size: most eeePCs come with a button to instantly adjust the screen resolution (a big plus for eee PCs, btw), and a screen resolution of 1024×600 pixels isn’t an issue, actually. What is problematic is the tiny size of the display – an 11″ screen would be much better, but then, again, with a 22″ TFT connected to it (via VGA only though) you can actually work on it without noting a difference.

One thought on “using a netbook as your daily computer”