Over at AfriGadget, we usually call something an AfriGadget if it is a DIY solution to a problem or situation to which there just isn’t any ready-made solution available.

In places where you just can’t go to the next hardware store and buy a ready-made solution, an AfriGadget is such an attempt for a working alternative.

I would even go as far as saying that Germany, for instance, is a very modular country (with many regulations & technical norms) and consequently offers many ready-made solutions that can just be purchased and instantly used. Spare parts for cars, houses, technical equipment – you name it, there’s a norm on it and a place where you can buy it. 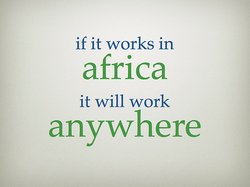 Erik of WhiteAfrican recently argued that “If it Works in Africa, It will Work Anywhere”.

You may or may not agree with this provocative thesis, but it also shows that we are still consuming many products in the “developed” countries which were actually made for our consumer behaviour. And these things are also exported to Africa.

Anyone in the diaspora who has ever exported his older laptop for members of the extended family back home also knows that it may probably be broken once he/she returns during the next holiday.

Most conventional laptops are just too fragile to withstand the heat, dust, unstable power supply, malware and other threats the relatively rough life on “the dark continent” has to offer. And battery runtime with an average of max. 2h is often below par.

Netbooks are simple, often light-weight small computers with a simple (but modern) CPU, enough RAM, a harddisk, a small screen (7″-10″), 2-3 USB ports, a sound card, WLAN connection and a card reader. They sometimes even come with an internal Bluetooth adapter so you can connect your mobile or other Bluetooth-enabled equipment to such a little machine. Oh, and it also has a webcam which is neat.

Most importantly though, many current netbooks are quite durable and even survive rough conditions. 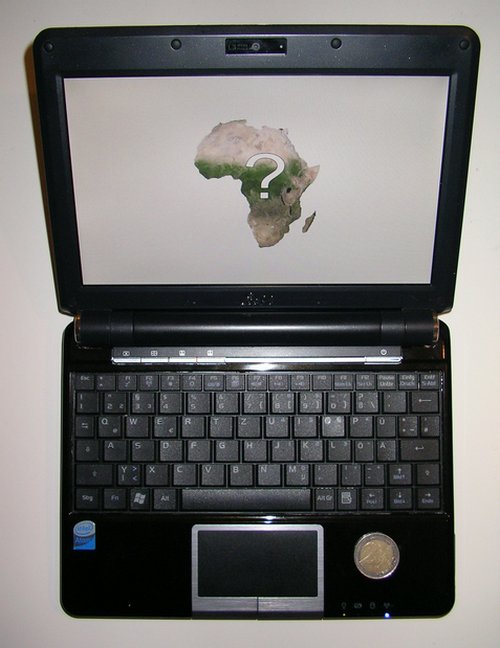 Take my netbook, for example. I’ve purchased this used Asus eee PC 901 a month ago – and while I am still struggling with it’s tiny keyboard layout – I just can’t stop thinking that it could or should actually be THE killer device for use in many developing countries.

My netbook doesn’t have a conventional magnetic (rotating) hard disk, but instead comes with (slow) SSD flash memory. Like the one found on USB memory keys. 12 GB for the operating system, programs and some private data. Battery runtime is beyond 5h on this little baby – which means that it’ll even survive the next power failure. And since the tiny CPU inside doesn’t consume too much power, it could also work from the electricity generated via solar panels (a technology that’s already quite popular in many rural areas).

And here’s the bonus: most future netbooks will be sold with an internal UMTS modem, so you just insert your SIM card and go online. From anywhere where there’s network coverage. (I am actually saving on an Asus eee 1000H Go which has a 10,2″ screen, a better keyboard and an internal 3G modem).

The term “netbook” may be a bit irritating though (besides of this legal battle) as we all know that Internet broadband connectivity is still very limited and expensive in many developing countries. Instead, these little computers are much more than just very mobile computers with very good battery runtime: they are sufficient for most needs.

I’d say that at least 90% of your average tasks can be done on such a machine. Surfing the www, checking your e-mails, writing texts, spreadsheets, games – you name it, it does it. The only thing it doesn’t have is an internal DVD player, so your illegal DVDs purchased at that junction downtown probably won’t play – unless of course you connect an external DVD player via USB.

As long as the iPhone or maybe also some new Google Android phones are the only mobiles with a decent web browser (@Nokia: the S60 browser is NOT a decent solution), netbooks may be the perfect alternative platform and substitute the missing alternative.

“If it works in Africa….”….no, if it works anywhere else, it will also work in Africa.

“70% of Netbook sales so far have been in Europe“ – where they are often only used as second computers or desktop alternatives to those who just want to surf the net from their couch.

In many developing countries though, Netbooks could imho be the entry platform and substitute the otherwise missing or broken (older) computer system. Why? Because they are cheaper, more durable, come with their own power supply and are mobile enough to be shared by many different members of a family or local community.

And that’s why I consider netbooks to be real AfriGadgets. A solution to a problem we have in the past often tried to cure with mobile phones and their still ailing browser software.