The following post is dedicated to Samuel & Juliana – both connoisseurs of mobile phones that come with an integrated flashlight (such as the Nokia 1208).

Well, if you happen to live in a country with frequent power failures and favour all-in-one devices, an integrated flashlight comes in handy for those moments when it’s too windy or otherwise inappropriate to use a lighter as a source of light. Dedicated LED-based flashlights are nice and proven – I have mine on the keychain – got it free from Globetrotter.de some years ago. 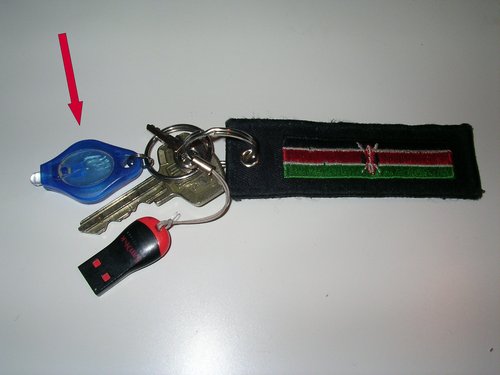 Sure, you could even use the brigtly illuminated screen on your phone to satisfy any quick needs for a source of light, but it just isn’t the same comfort and also isn’t right on one single spot. There btw is a fancy app for the iPhone which provides a blank white screen to substitute a flash (says @mzeecedric). Quite a ROFL-factor but more like a gimmick. Other recent Nokias with S60 and LED-flash for photography can be modified on the hardware side, e.g. cutting a wire on the printed circuit flex cable. Those “flash lights” weren’t made for constant illumination needs, hence it’s highly recommended not to do that.

I’d been thinking about a DIY alternative for a phone that could be realized by any average phone fundi out there and consequently didn’t want to come up with any SMD-type solution that would probably do a much better job, but instead come up with a simple hack that – most importantly – may be reversed to preserve any warranty on the phone.

The actual need for this project arose late last night after Samuel’s tweet on how he misses the flashlight. Besides, I had urgent work to finish so I needed an external incentive to push me through the evening until I could eventually put my hands on this “hack”. 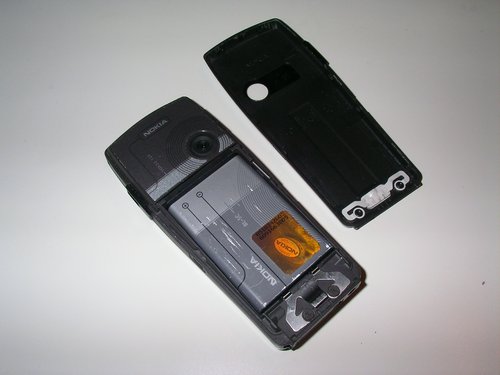 an older Nokia 6230 I rescued from eBay some time ago (my 6230i walked away in a Were-sense…). Here you can already see the thin back cover which can be replaced anytime and is thus perfectly made for hacks. 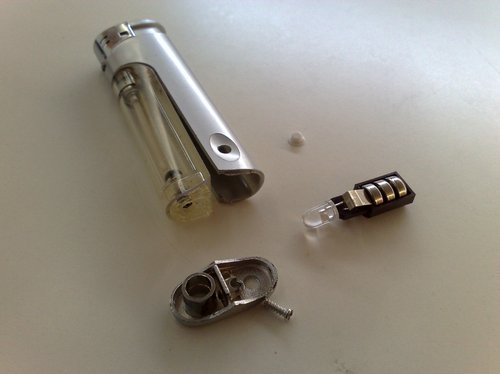 an old LED with batteries from a dead lighter

So let’s start with…. 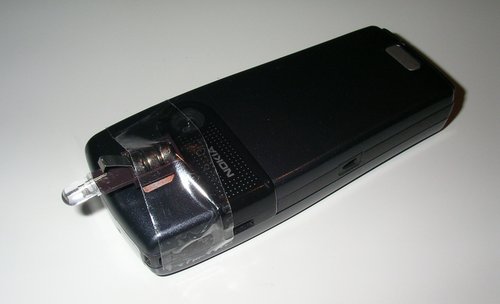 A quick ‘n’ dirty solution that will just do the job.

Not very sustainable though. Which gets us to…

Many Nokia phones come with an exchangable cover, so it’s obvious to make use of the plastic cover which can be exchanged any time. And since there isn’t much space for a bigger battery, we’ll also use the phone’s own battery. After all, it’s based on LithiumIon technology which means relatively high energy density.

The LED is in blue colour, but basically any stronger LED will do the job. Your fundi may be able to resuce one from the usual e-waste found in popular places. I am also not using any resistor or any other passive & active parts to keep it really simple. All we need to do is to sacrifice the back cover for this hack (coz the LED has to go somewhere) and get a direct connection to the battery.

So I’d asked myself:

To worsen the situation even more, I currently do not have access to my usual tools, but then again, that’s the challenge after all – trying to find a decent solution under limited conditions. All I currently have are scissors, my Leatherman Wave, a (really!) cheap voltmeter and a monsterous 30W soldering iron. My Gadgetimoja-toolbox is somewhere else on this planet…

Trying to find a short piece of relatively thin wire turned out to be the hardest part – I have lots of that stuff at home – but where is it when you need it??

So I did what everyone does in such situations: improvise – and take it from somewhere else. In other words: look for another electronical device and see if you can “borrow” some 10cm of wire from that. 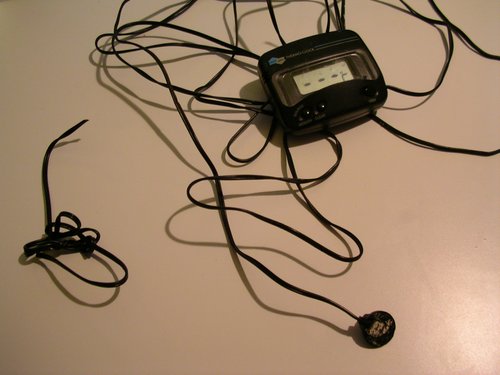 Pole sana, dear electrical thermometer. It’s friggin cold outside anyways so at least I’ve provided you with a few indoor minutes. And thx for the cable!

Improvising also means that you do things by trial & error and try to avoid any hardware modifications by simulating the scenario in your head. Will this work? Where will I put the LED? Can it still fit? And what about that damn switch?? 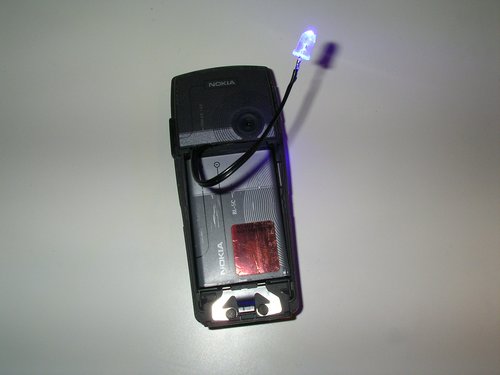 I’d made good experience with “drilling” decent holes into plastic (mis)using a cheap soldering iron in the past, so I just continued “drilling” a hole (don’t try this at home, kids) using this method. Just make sure you actually clean the iron afterwards and while it’s still hot. 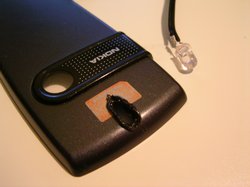 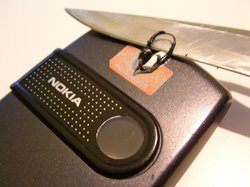 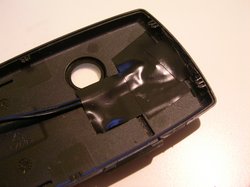 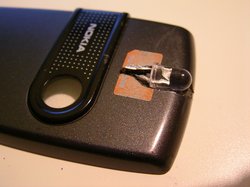 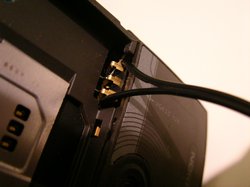 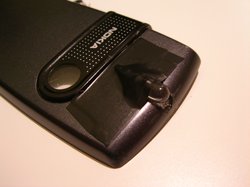 As you can see from the pictures above, the cables are just loosely joined with the wonderful battery dock on the phone so that you can remove them any time. The LED is rather big but “somehow” fits onto the edge of the back cover. Also, the cable is still too thick and the back cover will not close the way it is supposed to (also because my phone….ahem…let’s say: had already survived a few other “operations” in the past + remember I’d previously aquired it in an awful condition from eBay).

A “switch” is also missing but this was just version 0.1 to show it’s doable to pimp an ordinary phone into a flashlight phone. It’s a jua kali hack for prototyping, I’d say.

Do you have any ideas for a switch? How would you design it? Maybe integrate it on the side? And is it locally available (= keep it cheap and simple)? 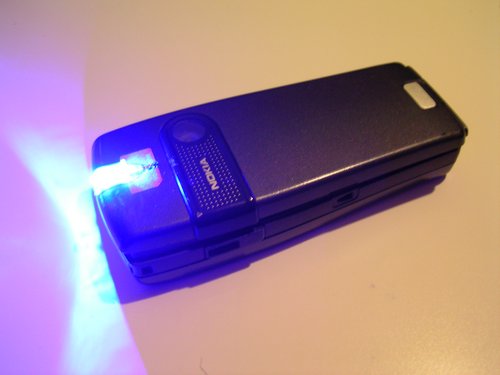 The activated LED with the back cover just put on top.

I will try to organise two more back covers so that I can play around and see what else is possible. Ideally, I’d like to see someone else from Nairobi pick this up (if not already done – sijui if this already exists in Nbo these days?) and modify it into a commercial add-on for wanainchii. After all, phones with flashlights just rock and should imho be on any phone out there. This solution here won’t jeopardize the gadget itself – and such a plastic back cover is cheap, especially this one (with a Vodafone branding, yuck!).