Nutec is all about nutrients that will remain in a biological or technical loop, or as the tagline on their website reads: “Everlasting Cycles: How Waste becomes Food”.

Nutec was partly organized by EPEA which is run by Prof. Dr. Michael Braungart – who is the B in MBDC (McDonough Braungart Design Chemistry) – an international consulting company that tries to a) sell the philosophy of the so-called Cradle to Cradle (C2C) concept and b) tries to achieve this by convincing companies to obtain a C2C certification. 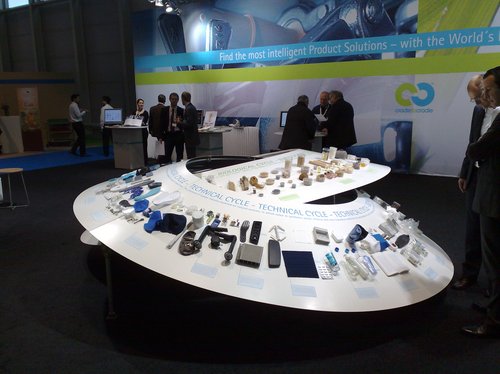 closing the loop on technical and biologial nutrients

Since Michael was my professor at university and since I a firm believer in this philosophy of closing the loops (which is one of the reasons I started becoming active in the field of ecological sanitation), it was particularly interesting to see how this event was set up, where the aims are, what kind of visitors it would attract and what any possible outcomes are.

Those of you who frequently visit other green blogs like Treehugger.com, know that C2C is a “sexy” and already very popular approach at dealing with the protection of our environment. And those who have read McDonoughs & Braungart’s famous Cradle to Cradle book often agree that their idea of another industrial revolution actually is the way to go. Maybe not at once, but in small steps and by starting today. I have even convinced some older folks in the business who have a very green background of this new approach. Especially since this whole green movement has been active here in Europe way back in the 1980s when our US-American friends only had green flower people – so opinions on “what needs to be done” had already been settled, with the usual discussions. Unfortunately, green activists had in the past often only experienced a negative image, partly due to their bad rhetorics. You simply can not tell anyone he’s doing someting bad if your only solution is to advice him on doing less (bad things).

McDonough & Braungart both achieved to market their idea of another industrial revolution, where they are asking companies to redesign their products into greener products. Products whose materials remain as nutrients and may then be reused for another purpose. I won’t go into more details here because I’ve blogged about this subject more than once during the last three years and there are various other resources online that give a much better insight into the subject. 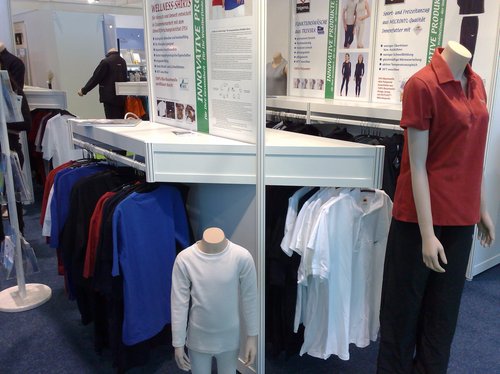 Trigema – Germany’s famous manufacturer of clothes who produces compostable shirts right here in Germany. The CEO of Trigema was present at their booth and really impressed me. Talking about Corporate Social Resposibility – big up for Trigema!

Back to the Nutec exhibition: this year’s event was a trial set up by EPEA to see / test how the public and international scene reacts. Messe Frankfurt, the world’s largest trade fair organiser, actually accepted a loss of 1,2 Million Euros to host this event – provided that EPEA/ElcaMedia continues to invite to another Nutec conference & fair, maybe next year in Hong Kong.

And this is what it was all about: an international event, hosted to pool interested visitors and their contributions, with about 60 exhibitors (this time only) that showcasted some of their ideas and approaches. And mind you, the idea behind all this is not to display eco products, but instead show the world that a better world is possible with economic incentives. After all, no company in this world will change its products only because of some environmental concerns. Instead, there’s money to be made out of this – analyzing your material flow streams and processes will help you (as a company) to save on lots of hidden costs you may not have been aware of. So instead of telling companies to stop polluting the environment, these guys invented the C2C certification which provides a detailed analysis of production processes and shows them a way forward. 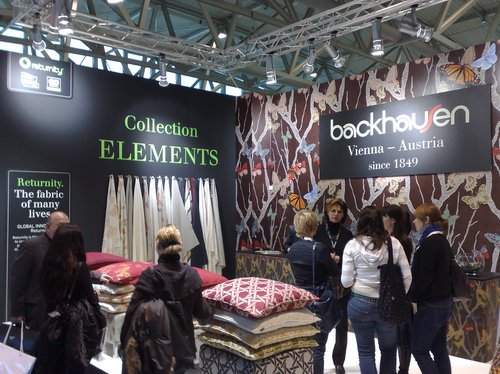 Backhausen – an Austrian company producing returnable fabrics. These guys were certified with a GOLD C2C certificate for their products.

The C2C certification has in the last few month also received some criticism online, especially as portrayed in this story on FastCompany last month. Despite of some personal resentments some CEOs may have with MBDC, the C2C certification is a smart way to cash-in on environmental protection, as it helps everyone involved.

For some reasons, which may also include this 49-minutes long documentary on MBDC, the C2C philosophy has become very popular in The Netherlands lately. It probably also is one of the reasons why Nutec this time attracted many Dutch exhibitors – green start-ups that are often looking for investors and who have some very smart ideas.
Braungart is a German though, and when I look back at university, I think I am save to assume that only a handful of students really understood his concepts and the importance of his message. It’s like the prophet who’s an outsider at home. I blame this on the German culture, and often wish my fellow countrymen here would be much more open to new ideas and willing to take more risks. So it’s very nice to see the Dutch side being so open to his ideas. We urgently need much more of this enthusiasm in Europe. 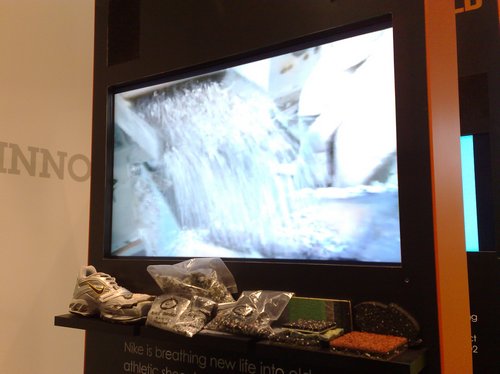 Nike – with a small booth displaying their shoe recycling concepts. 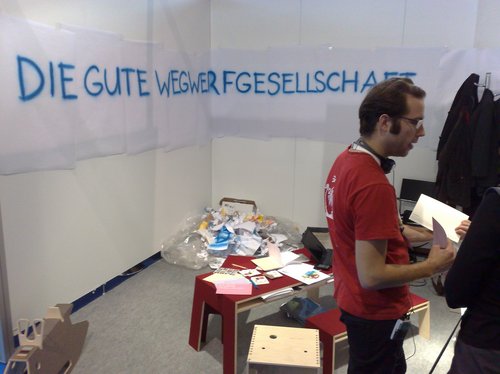 These guys from Austria run a networking agency and set up a pilot project in the city of Graz where they managed to obtain funds from the European Union that helps them turn the city centre into a greener place. Simple, but smart and making sure to use what’s available (the EU has these grants + there’s a whole industry busy trying to apply for these). 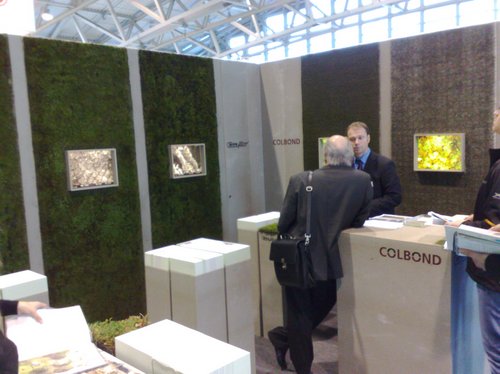 XeroFlor – these are the guys that provided the green (grass) roof to the Ford Rouge Center in Dearborn, Michigan, USA – the world’s largest green roof, covering 46,500 m² and thereby protecting the roof from heat and cold, improving the interior climate, saving on heating energy and offering habitat for smaller animals and plants.

I recently visited a friend who lives in a green roof building. If I ever manage to build a house one day, I’ll try to get my hands on such a roof. It’s just awesome! Didn’t ask for a price though. 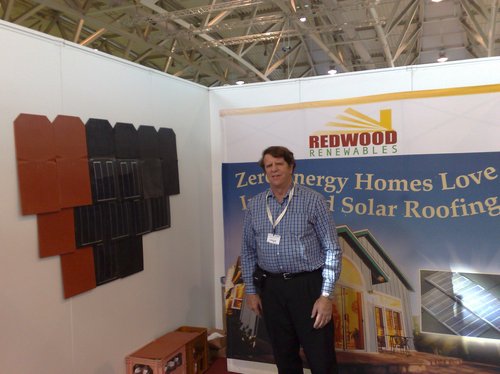 Told him about solar systems being in use in rural Kenya and how popular the system already is over there. For a typical household of 4-5 pax, you’ll need about 417 solar panel tiles on your roof.

Ron is currently looking for investors.

(Funny thing is that I had read about his project before when someone had sent me a link to his one-paged website some time ago and upon seeing his logo (!), I instantly remembered the link from the other day. It’s a small world :-) 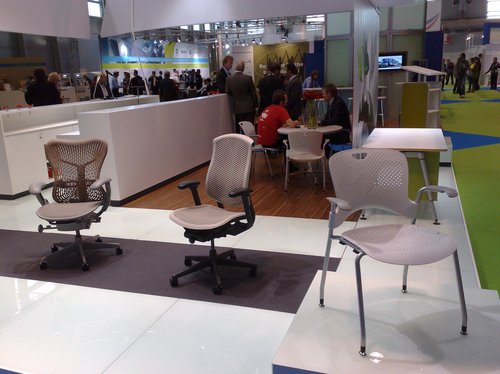 The famous Herman Miller collection must not be missed on this event. Comfortable and well-designed furnitures (and lamps, visible in the background) that make the difference. The materials used on each chair have been reduced to a limited selection and inspected for their toxicity. That’s the kind of chair you’d want to have for your office. Or? 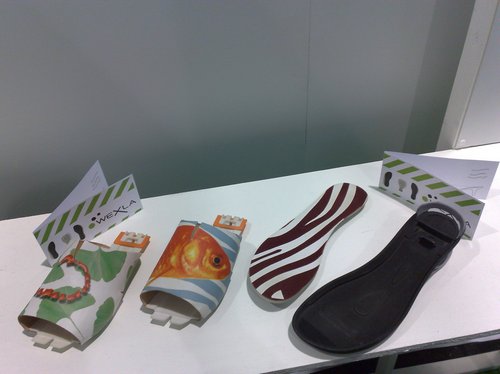 Some other crazy Austrians who invented this new show concept consisting of three different parts. The company name Wexla apparently is a joke on the word “Wechsler”, which would prolly translate to something like “exchangeable”. And exchangeable is what their shoe soles are.
These are prototypes, so don’t be fooled by the somehow strange design.

The idea behind this obviously is to provide exchangeable shoes to customers. I’ve even seen another Dutch company offering a very very nice laptop bag which can be rented for a period of three months and then returned. Could you imagine renting consumer goods instead of buying them? Well – that’s exactly the scenario we’re talking about here. Imagine your desk at work being occupied by someone else so you’ll have to work on another desk. How would you feel about that? Are human beings ready to accept such new habbits?

I tend to compare that with the YouTube Generation that stopped buying complete (music) albums and instead downloads single tracks online. Because it suits their needs. 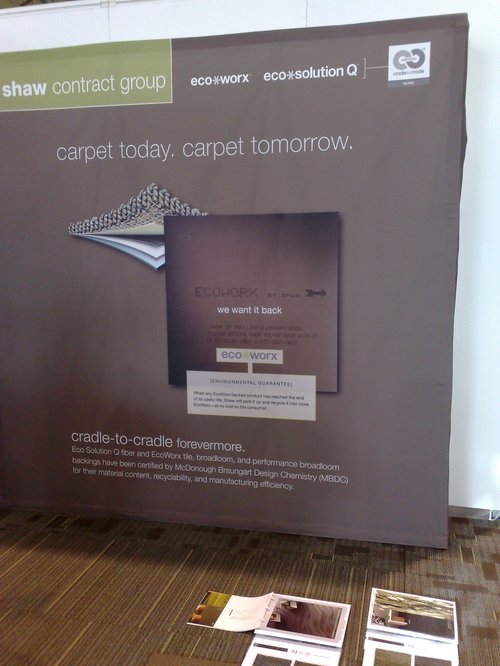 We walk on carpets almost every day and inhale the abrasion. Think about it! 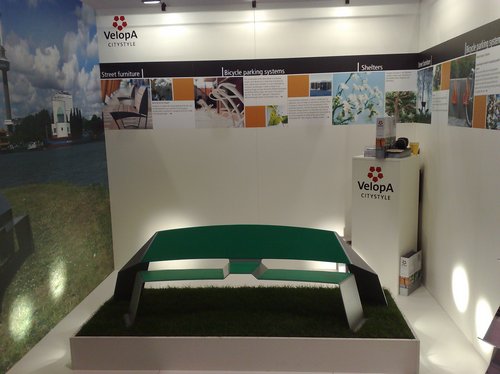 A talented industrial designer at VelopA-Citystyle developed this new bench system created of two different materials, which is currently waiting for an official Cradle to Cradle certification. Appart from the green cover in this 1:2 scaled model above, “the bench is made from one piece of steel, without nuts and bolts, and is less vulnerable to vandalism and damage”.

That’s one those moments where I think: damn, I should have studied industrial design! :-) 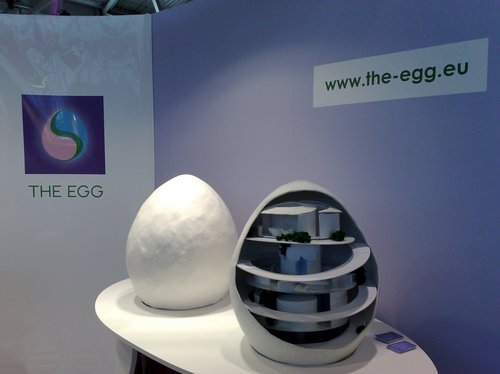 And this idea, ladies and gentleman, is one of the craziest concepts I’ve heard of lately. But a very good one, indeed.
What you see here as a scaled egg model, is supposed to become a comfy building for expecting mothers who want to give birth to their children in a much better, eco-effective environment. It’s a new type of childbirth centre, so urgently needed in Europe because birth rates are alarmingly low these days and in some European countries, giving birth is only possible in hospitals (and not at home, where you’d probably feel more comfortable). Once investments for this project are secured, they will try to build the first project in Spain.
Obviously, I couldn’t resist telling them about urine diversion toilets that would add a greener side to their sanitational facilities. :-)

These are just some of the exhibitors, and there were only 60 around this time. Maybe there will be 200 next time – featuring innovative products from toxic-free cleaning detergents, healthy toys to edible fabrics and cleaner toner cartridges. Who knows? Everything is possible if you start analysing the products that surround us and realize how much we’re currently poisoning ourselves.

Interestingly, we saw a lot of (industrial) designers on this event – as opposed to traditional engineers which is what you’d prolly expect from an engineering perspective. But then – these designers are the ones to create the demand side, the ones who will have to ask for better materials.

It will be particularly interesting to see where we are in let’s say five years from now – what kind of products will have changed and found their ways into our daily lifes. What seems obvious to me is that C2C is a great marketing tool to promote innovative products for a better world. Oh, and there’s lot’s of money involved.

When will we see the first African C2C certified product?

[n.b.: Talking about environmental matters – what do you do with all these brochures you normally pick up at fairs? Read them at home and then throw them away? Many of the above mentioned projects have interesting brochures but still lousy internet websites. How come? I actually prefer a good website to obtain the relevant information instead of a papered brochure….]