Been on the road and had problems getting online. An irritating situation as I wanted to stay informed on the news from Kenya.
486 lives lost (according to official figures) due to such unnecessary, avoidable and stupid riots. An uncountable number of causalties and displaced persons, a nation in shock – not because of riots which everyone more or less anticipated at one point, but because of a conflict that – according to the international media – boiled down to a tribalistic reasoning and the clear failure of the so-called “leaders”. And those who did actually contribute to the conversations had to rely on citizen media as the official broadcasters were muzzled.

Anyone remembers the floods in Garissa in Nov 2006? It took the GoK at least three days to send the local police helicopter to save some lost kids from trees (who had stayed there for three days without any food or water). While floods are temporary, a government that has cheated its own people will stay for good.

I had dreamed about Kenya during these days, had to think of my friends and loved ones who are struggling hard to make a living in an environment where the Government will only intervene when business is at stake.

I am so grateful for the various bloggers out there who took their time and money to keep us – everyone – up to date on what’s going on in Kenya. We didn’t have Blog Awards for the Kenyan blogosphere in 2007, but maybe we should just give them to those who contributed content during the Kenyan elections 2007.
Also, I comment Ory on her work as she lets others speak up and posts their very own stories. Global Voices taken to another level. I say: if you’re interested in Kenya as a country and have something to share, go ahead, come up with a blog, comment on other blogs and contribute to the ongoing conversations. People are connected in 2008, even via mobile phones, and the ban on live coverage does not help to end any conflicts. We cannot rely on “leaders” to come up with a top-down approach to implement any peace approaches. This is why I am so convinced of the power of these online tools. 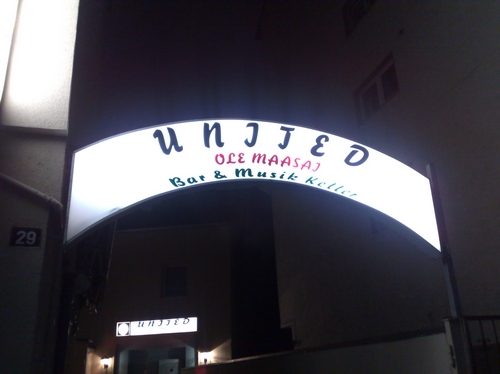 Been to this (great!) Kenyan bar right here in Frankfurt on Sato evening. My wife Ische has never been to Kenya before, so I wanted to introduce her to some important things she needs to be aware of. Sort of a “soft start”, if you like.

1. loud music (even if there’s no one dancing)

2. people ordering more than one bottle of beer

Verdict: she likes it A LOT and even liked the beer… 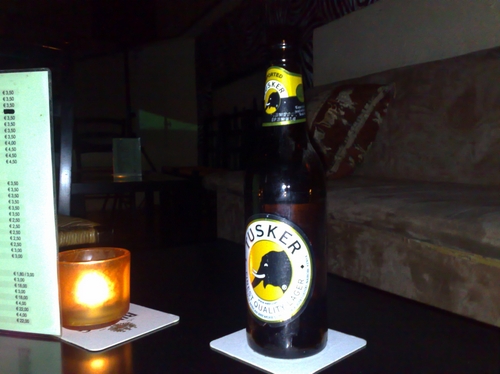 I felt a bit irritated, nipping on a Kenyan beer in a Kenyan bar while people are dying at the same time back home. This is also why I am a bit lost for words these days as I am struggling to adjust to this world. There’s so much more even words couldn’t describe – and I just couldnt stop thinking about this old, worn-out proverb that once again proved to be so true:

“When elephants fight, the grass gets hurt.”

Quote of the day:

Before the elections, the majority of Kenyans were in an upbeat mood, expecting their parties to clinch victory, but the violence that broke out after the announcement of the presidential result has terribly eroded our democratic gains, says Thomas Odhiambo. He now wishes that President Kibaki could reactivate the SMS number he had advertised for voters to use to discuss issues with him during the campaign period. “I would have informed him that many of us are suffering, having fled our homes due to violence,” says Thomas. (src, reg needeed)