Kenya, the land of adventurous wildlife safaris, endless beaches; the land of tea and coffee; the land of successful athletes; the land of different cultures and people…. and the land of business cards.
A country, where influential ppl are abooolll to pull of a deal that has some US$ 200 millions sidelined from public funds whereas fishermen in Western Kenya are forced to use mosquito nets to catch fish (!) is still the country I love the most. Don’t ask me why, I don’t know, it’s just a feeling inside – and it sure isn’t only due to myself being this Mzungu from Europe who has misty-eyes for the reality in Kenya.
The reality being that Kenya is a country with a HUGE potential, an assiduous group of well-educated young ppl that are ready to take over responsibility and make Kenya popular to an extent beyond to the already known “products” such as the tourism industry, gold medallists and cash crops. The reality where we see a lot of ppl dying from diseases that could be cured in other places of the World, hunger epidemics due to the lack of reliable crops, the lack of decent water supplies and proper sanitation despite of the fact that Kenya is surrounded by enough water reservoirs, the reality where we see an upcoming middle-class with desires to make proper use of a working infrastructure (communication networks, roads, water pipes, etc), the reality where we see this apparently huge gap between city ppl and their upcountry- shaggz – folks who are a bit behind the city attire, the Nairobi style, the sheng culture and the hip hop tunes emerging from Dandora’s Ghettos. The reality where we see a lot of young Kenyans taking up different chances outside the country (as M mentioned earlier) just for the simple fact that – contrary to Kenya – opportunities open up and in today’s world it is important to survive and to stick to any opportunity that opens up.
Globalization, be it Germany or Kenya, you have to be good in whatever you do (or better & faster than the competition), and where being good alone doesn’t change anything, you’ll need connections, a reliable network of business contacts, something or somebody that will help you get a decent job/deal/position/etc.
As much as I hate this constellation, and seeing that a lot of really qualified ppl don’t get their chances just because the job market doesn’t provide as many slots as there’s a need for, I will need to prepare for this challenge as well.

“Oh yes, you know me I have lunch with this and that person…I know him very well” – aterere…that’s not my style. I know a lot of ppl are like that and they’ll often use any chances to underline the important contacts they have. Who? You mean I just call them and they’ll type a letter of recommendation for me that will open up doors at this and that Ministry or important office? ….“Oh, you’re working for this NGO? Ati, from Germaaaan(y)? Haiiiaaa, I know this man from Europe – in fact there’s this mzungu I know, wait, what’s his name again? Muller? …oh, you know, we did some business with him some time ago. Yes, we good contacts with him”. etc. etc. etc. *yawn*
The bottom line is that there are a lot of informal networks, and those networks aren’t closed to any Lions or Rotary Club networks or limited to a membership for Windsor or Karen Golf & Country Club.
What you need in a country like Kenya (and a lot of other places around the world) are credentials, a good reputation, publicity or money – the later commonly reffered to as Bling Bling style.

As the alleged Armenian ndugus have already shown, the Bling Bling method is SO 1980s Kashoggi styled. Ati, no Kenyan buys that story and – frankly said – it just sucks. If you have money – and some ppl think you’re rich because you have this light coloured skin (*/wtf?!) – you keep it to yourself or at least try to hide from public. Showing off is just so new-rich, so horribly ungentleman-alike. Understatement is what we’re looking for.

Which brings us to method numba mbili, the business card approach.
I have this well known “friend” in Nairobi, a buddy a lot of ppl in Nbo know. He is this (muhindi) guy who used to have a female American friend speak on his answering machine to make it look like he could afford his own secretary. But beware, not just a secretary, but this mzungu one. You know, the foreigner bonus, which makes him a bit more “special”. In fact, he is the very same guy who bought an ETACS mobile phone back in 1995 which was of course offline because back in those days, the mobile phone network was limited to 2000 users only and all he needed was to have this phone on his belt so he could “look important”. As I said, he knew a lot of ppl and had perfected the small talk business.

Naturally, he had his OWN business card. Well, business? What for? The business of sweet talking? WHO CARES! He had already perfected the most important thing with business without any further theoretical studies: marketing. Or in his case: personal marketing. YES! A business card, my dear readers, a business card is that little piece of paper you’re handing out to the person you’re talking to, and in his case – of course – it wasn’t just a normal business card (bc). Whereas some companies maintain their boring logo and corporate identity even on the bcs their giving out to their employees, his card was GOLDEN. Yes, you read that right. A white bc with big golden letters, a fancy name and the V.I.P. look. Here comes Mr. Important….

So the point is that he knew how to sort of impress his ppl – and the next bc I saw when I met him again a few years later was much more serious because he had in fact opened up his own import biashara which required a more serious approach. However, still, the first thing I was given was his BC. Alafu: I’ll also need a business card.

Now, since I dropped my well-paid job(s) some years ago and went back to university where I am just an ordinary student of water and soil management, I of course have NO company or corporate identity to portray or show off on my business card. Hence the need for something special, something that will make me look unique and impress ppl. I thought of this: 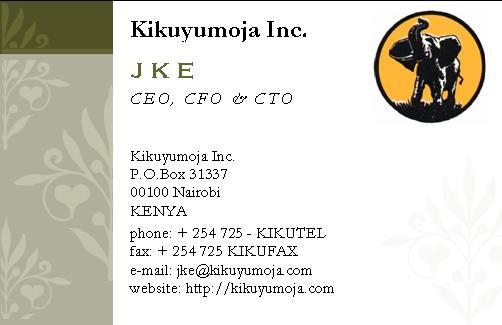 P.S.: yes, that’s a mobile fax gadgetimoja of course, what did you expect?!
P.P.S.: maybe I should rename my company from Kikuyumoja Inc. into “Gaaman Rrrreasing Ltd.” due to better marketing chances…

13 thoughts on “the business card issue”