The beauty of living in upcountry, rural & remote (really LOST) places like this kijiji (village) over here in Germany is that it sometimes reminds of the “Place of Cold Waters”, also known as the “Green Grey City in the Sun” or just the “City of Nairobi” in Kenya.
Back in those days when KBC aired boring tv shows and KTN only offered phoney BlueBand commercials, I would go to Sarit Centre and borrow one of those “brand new copies” which often turned out to be camera-copies from a cinema in Karachi.
I understand that things are a bit different today and that the media coverage in Nairobi itself is much better. However, having arrived at home with such a VHS tape back in those days, eagerly awaiting two relaxing hours of pure entertainment, something very common would happen – something, experts call “power failure”.
Kenya being the country of my choice, those power failures never really changed my mood and I often found other interesting things to do like going out and enjoying a Tusker in Waruku and talking politics with Kamau, Njoroge and Wachira.

Two days ago – after all those years of wondering how to do it – I eventually managed to succesfully connect my computer with my televisioni using this conglomeration of cables and cinch, svhs & scart connectors: 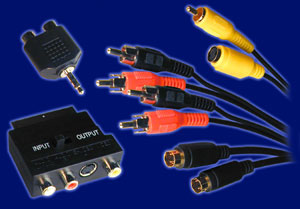 Of course, Murphy’s Law being the prevailing law of nature technology, things wouldn’t be that easy and I also had to download THIS great little programme to get things going with my older Nvidia GF3 Ti 200 video card (hey hey, NERD-content generates blog-traffic! :-) and a short test with the whole installation turned out to be positive.
So there I was: ready to enjoy “Hotel Rwanda” in JKE’s jua kali Home Entertainment System (JKHES®)!

Five minutes after the movie had started, my old friend by the name of “power failure” came back and switched off everything. For a second.
Well, I told my visitors something like “hakuna shida” – and that I’d be disappointed because I was expecting a longer power failure….
Just as said those words, power went off again, stayed off for about 2hrs and there it was again: the reminiscence of Nairobi.