Frau Dr. Angela Dorothea Merkel was sworn into office yesterday as Germany’s first female chancellor (or chancellorette as quoted in another blog) and already made her first offical trip to Paris and Bruxelles to reconfirm this special relationship between France, Germany and the EU. 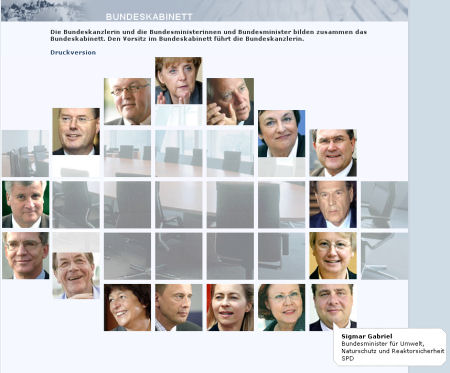 Now, blogging on politics often carries a certain punchline somewhere and there sure is a lot of amusing stuff already on this woman and her new team of ministers (as pictured). Be it her ever changing looks (read: hairstyle), her shy husband (who reminds us of Denis Thatcher among other parallels like the scientific background) or even her childhood in the former GDR, which apparently formed her in one way or another.
I think a lot of people in Germany actually like the big coalition between the CDU, CSU (right-wing) and the SPD (somewhere in the middle wing) that enabled this new government and I do of course hope that the other, smaller opposition parties will take a big chance to add their constructive criticsm.
And just as much as I would like to make more fun of all this and openly laugh about Frau Merkel’s clumsy appearances, I would like to point out that it’s good to have a female chancellor in this world of sensitive, neurotic male politicians. I never voted for her, but I am happy that she made it nevertheless.

The alternative would have bored me to death, I think. :-)

One thought on “Ex oriente lux”