Just as I was once again reminded today that its those small things in life that make me happy, I received an envelope the next moment (barua pole pole /ado ado a.k.a. snail mail) containing 6 Ubuntu CDs. A live and an install version of Ubuntu’s 5.10 release for x86 (Intel & AMD) PCs, one for 64bit CPUs and one for Apple computers (G3,G4, G5, iBooks & Powerbooks). Everything free of charge! 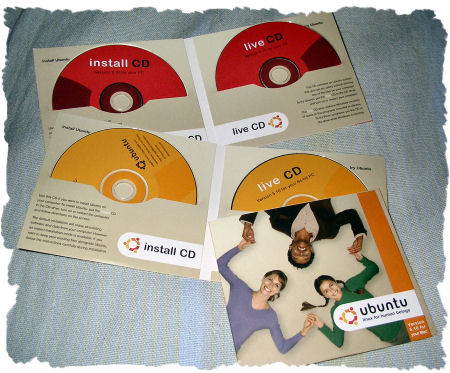 I had ordered them via Ubuntu’s website some time ago and still can’t believe those guys are giving them away for free! Of course it’s a great way to promote an already nice product (unfortunately, they never include Kubuntu – the KDE version of Ubuntu – though changing from Gnome to KDE isn’t such a big deal), but this is a serious operating system based on Debian that’s ready to run on any normal computer.

Could you imagine M$ throwing out their copies of buggy Windows XP/Vista for free?

3 thoughts on “the best things in life are FREE”