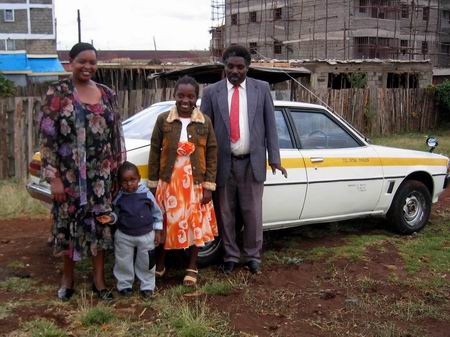 Now.…as you might have figu­red alrea­dy, I am deeply in love with this Tan­ga­wi­zi-Lady*. That woman is strong and — the way it is with love — whenever I think of her, my heart fills with joy and hap­pi­ness and I can’t wait to see her again. But! — she just drop­ped me a few lines, tel­ling me that she will stay in Kenya for some more time and cur­r­ent­ly does­n’t think about fly­ing back to Ger­ma­ny. She did­n’t even lea­ve any tele­pho­ne “nam­ba” under which I could reach her…yani, out of sight, out of my mind? No way! She’s the one that made me think about doing more sports, even­tual­ly stop smo­king, focu­sing on my stu­dies and just being more con­cen­tra­ted on the things that will be good for me. But not by tel­ling me (I would­n’t like that) — ins­tead, she would just inspi­re me and make me rea­li­ze it mys­elf (I am an old man who needs some time to rea­li­ze wha­t’s good and bad and what women actual­ly mean when they say yes or no… :-).
So she left the other day for Kenya and I’m here and thin­king: she won’t come back? — then I’ll have to come and visit her! Mapen­zi ni kikoho­zi, haya­we­zi kufi­chi­ka. What are you wai­t­ing for, dude?

I am wai­t­ing to win the lot­te­ry which would enab­le me to buy a pla­ne ticket, I am wai­t­ing to find a way of stop­ping time so I could easi­ly just take a few days off to Kenya without being frigh­te­ned that I’d miss some important things over here — and may­be I am also wai­t­ing for her to tell me that I should just come, no mat­ter what…

What would you do if the per­son you’­re real­ly in love with is some 6600 kms away and you just want to see her again?