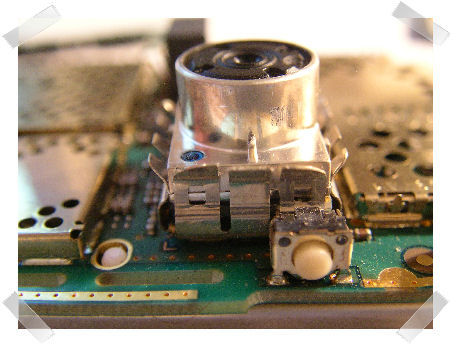 Problem…. I got a short message on my mobile phone and realized that the vibrating motor inside didn’t work. Of course I checked the settings, switched it off and even removed the battery for a cold start. Still not working. Ayaaaa!
I got this phone a year ago and since then I always refrained from opening it further because, well, because it somehow (!) worked. Of course the internal firmware (v05.24) still has some bugs and I already had it flashed with a new firmware some time ago (I used to do this myself on those earlier DCT-3 models and even some earlier DCT-4 phones (Nokia 51xx, 61xx, 62xx, 71xx, 83xx) but those series-40 & series-60 phones require better hardware equipment for flashing the phone’s firmware and it just doesn’t make sense to buy such a machine if a) i am just doing this as a hobby & b) Nokia officially doesn’t like any firmware changes on the user side – not so Siemens, btw). However, this thing was LONGING for a small exploration of its circuits. It silently whispered into my ears: Kiku, tafadhali, saidia mimi…. OH my dear, help is on its way!
I pulled out my TORX6 screwdriver and removed those six screws…..Jeeeeeeeeeesssaaaaas! Nokia engineers – KUDOS to you folks over in that Sauna country – remember those early Nokia phones? YOU’VE COME A LOOOONG WAY and – apart from this firmware business and "occasional" software resets while typing an important SMS – the PCB layout is just awesome. For instance, those internal RF parts are normally sealed with a little metal cover which requires some patience to be opened. Alas, with this phone though, the cover itself is right under the keypad – which means that you don’t have to squeeze or pull anything open when you are trying to dismantle the phone – it just unfolds by itself! Perfect. What’s the biggest part in a phone? The battery.. 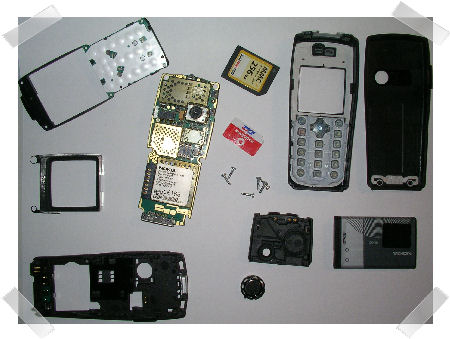 So I opened it up, cleaned the vibrating motor and corrected some elec. contacts. Curriosity of course hooked me and I consequently removed the digicam of its socket… BAD IDEA … when I tried to put it back, this thing in my head called intelligence somehow went on a little vacation (presumably because of thinking about Mbuzimoja :-) and I inserted it in the wrong way. Well, it looked as if it was okay though – but still, you can even spot the problem in the above picture – those little noses don’t correspond to the metal frame around it. Dumb. Just dumb.
Of course I only realized that once I had everything back in place, so that thing had to be reopened and blablabla…. talking ’bout Murphy’s Law, eh?

The benefits of this little exploration, though: a) a nice view on good NOKIA engineering and b) SPEED! Upon switching it on again, this thing runs much faster now. What is it? I mean, wth? is the connection between the firmware, the acceptance of buggy MMC-flash-card-controllers and a normal hardware cleanup?

Technology sometimes gives me a lot to think about.