We had an interested reader over @ Afrigadget.com writing in the other day, who’s based in Juba, Sudan, and was inquiring about low cost, low tech, low maintenance recycling concepts for *plastic* bottles (PET). At best, I am afraid, we could only tell him about recycling companies already active in East Africa (especially Kenya) and direct him to the CD3WD, compiled by Alex Weir.

Now, when I moved back to Germany last year, some readers asked me to blog about what this place is all about. While I think a generalization isn’t possible, some interesting details or even local *peculiarities* may become visible while reading between the lines – or just by going shopping. In fact, I’ve just come home from the weekly food-organizing-tour at our local supermarket here and was reminded of this special PET-deposit system I’d like to tell you about. Call it bridge blogging, if you will:

From what I’ve read on Wikipedia, some Scandinavian countries are said to have started this deposit system in the first place, with Germany introducing it during the early 1980s as well. What I am talking about is a “container deposit legislation”, or Einwegpfand as we call it in German. 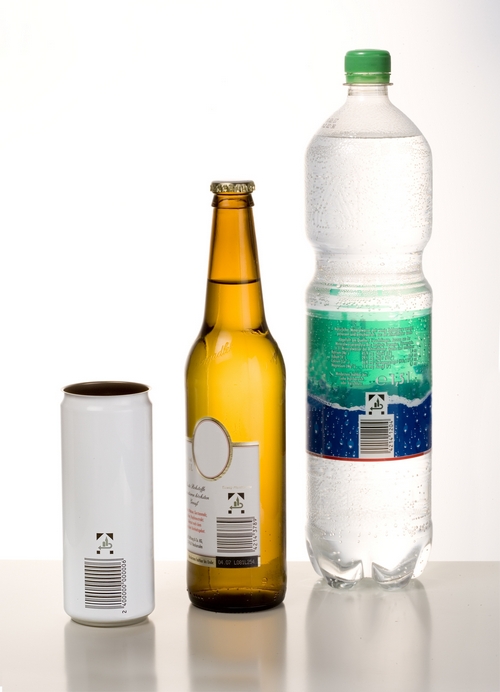 aluminium cans, glass and PET bottles – did you know that these alu cans consist of two different aluminium qualities? recycling them downcycles them to the lower quality….

Here in Germany, this was only valid for glass bottles and special high-density plastic bottles that could be cleaned and reused. Then in 2003, they changed this legalisation to apply to a much bigger range of bottles. Even simple (= thin) PET bottles and – most importantly – cans made of aluminium are now subject to a deposit. So while shopping for my favourite beer brand aka the cheapest available beer in Germany (0,29 EUR / 0,5l :-), I do pay an extra charge of 0,25 EUR which I am then refunded while returning the empty bottle/can using this machine: 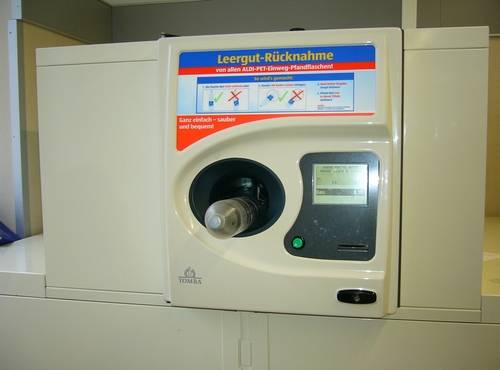 A reverse vending machine, made by the Norwegian company TOMRA. Such machines are installed in most supermarkets in Germany these days… (more)

The interesting part about this system is that most Germans are in fact good at collecting and sorting *waste* and then returning the containers to any supermarket. And while some ppl still claim the lack of decent data on this, the system obviously works. It’s also lots of fun putting these empty bottles in the slot where they are then analyzed (a barcode scanner checks for the UPC code), sorted (alu & plastics) and imediately crushed and compacted.

According to McDonough/Braungart, there’s “no such thing as waste” in an ideal world, but these systems just help to preserve the environment a bit and provide raw material for further recycling – but not upcycling! Still, better than nothing.

Now let’s hope that someone at NEMA will come up with a proposal to introduce a deposit on batteries in Kenya. 2 bob on each battery sold could maybe be enough incentive to make ppl fetch their old batteries from the taka taka pile on their shamba and return them. There may not be a 100% closing-the-loop concept on batteries or other nasty products so far, but it would at least help preserving the environment. All it takes is the right political framerwork, any maybe also some initial funding for the clean-up phase for older batteries that were sold without a deposit. A low charge as a deposit may be better than the long-term environmental damage these batteries create.

I believe that if you can’t change people and their behaviour, give them the right products and/or a financial incentive to contribute to this process. Same applies to public toilets btw but that’s another story.

Why? Because it took this legalisation for people to return their plastic bottles and aluminium bottles which in the past were only collected, burnt and deposited on a landfill. Many customers of course were upset at this extra work, but then – due to their assiduous German nature :-) – just accepted it and turned it into a success.