The keyboard and the screen are THE two important user interfaces between humans and their computers. Whenever I buy new hardware, I try to include these two parameters in my list of important criteria – especially since both my active machines do not come with a backlit keyboard (which is really sad).

So unless you’re the proud owner of an Apple MacBook (Pro) or Dell Latitude notebook with a backlit (!) keyboard, you’ve probably asked yourself why your notebook doesn’t come with a backlit keyboard, or how you could change that.

As far as I know, only these two manufacturers (Apple and Dell – but maybe also MSI and some Sony models) offer backlit keyboards on their laptops/notebooks, and there’s no comfortable way of installing a backlit keyboard unless you’re into some hardware hacking and/or have access to a light emitting foil and transparent keys. 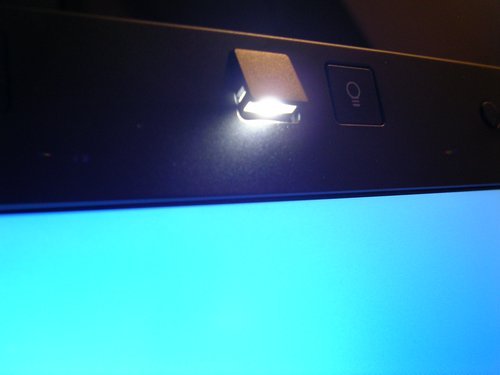 My HP Elitebook 6930p comes with an illuminated keyboard, which is a little LED light that pops out on top of the display (bezel) – very similar to what you may already know from IBM ThinkPads, but slightly better (because it doesn’t blind the eyes like the ThinkPad light on many new Lenovo ThinkPads & has an extra hardware button).

It’s ok and works, but not really a 100% satisfying solution. A backlit keyboard would be the better alternative.

On my Asus eee PC 1000HG, there’s no such light. Also, the keyboard on this netbook PC is rather thin, so any hardware modding would require extra space – and an LED that pops out from the bezel would probably only add another irritating light source (I’ve tried to hack one onto my netbook, but failed in doing so and had to realize that only a commercial solution would deliver sufficient results). 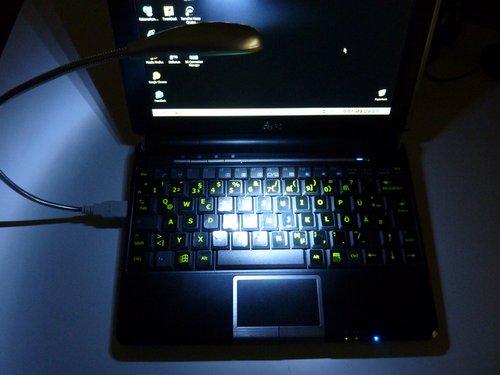 So I bought these external (USB) & flexible lights which kind of do the job for the time being, but also add another bulky gadget. Plus: the USB version blocks a USB port. 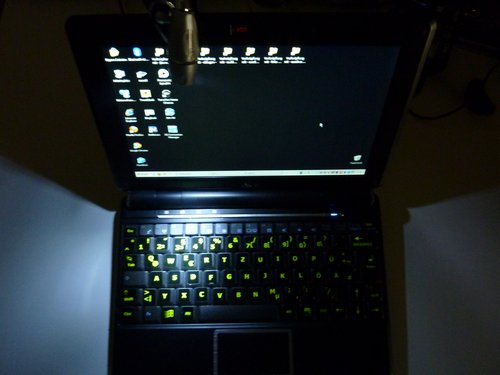 You can see from the picture that the 2nd external solution is clipped to the display bezel and delivers a very bright light.

Both these external keyboard lights can be adjusted, but luminance can’t be set and they are actually wayyyyyy to bright. Not nice.

So I kept on looking for a better alternative and stumbled upon these “glowing fluorescent keyboard stickers” (which you may already see in action on the pictures above) from this dealer on eBay: 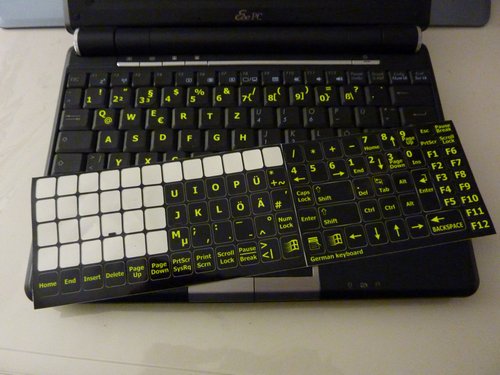 At ~ 6,- EUR for a set of stickers, I couldn’t resist and ordered these directly from the US (~ 10 days from the USA to Germany).

Now, these stickers DO NOT GLOW and AREN’T FLUORESCENT, but – as the dealer writes on his website:

“Glowing characters pick up any source of light coming in/ through ( such as light from your own monitor, laptop, or even USB light etc, etc) – allowing keyboard characters to brighten up immediately by reflecting the light, yet, stickers are not the source of light themselves. It is just the same effect* as a road signs reflection, or strips on uniform worn by construction workers or police.”

I think this best explains how these stickers work and why you won’t see glowing stickers on the following snapshot of the keyboard: 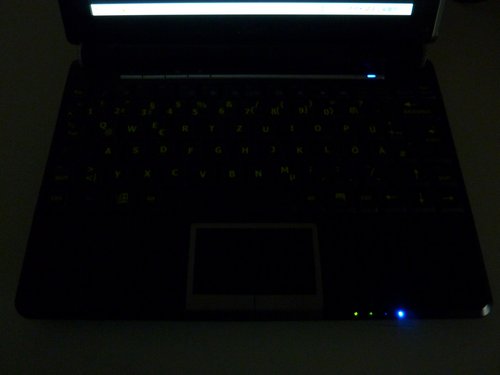 The main difference, and a reason why I’ll stick to these stickers on the keyboard for now, is that the letters are bigger and much more visible in darkness. So even though they aren’t glowing in the dark – like a clock dial – they do add some value and an improvement to this rather darker netbook keyboard with its tiny lettering.

I didn’t fix the stickers on the F-keys (top row) – and if you look at the pictures above of the attached stickers on my netbook, you’ll realize that this top row with its Function keys isn’t really readible in any kind of darkness. With netbook keyboards already being too small for the average user, I don’t understand why the lettering also is this poor.

Other than that, the flat surface of the stickers also adds some sort of chiclet touch to the keyboard (flat & single keys on modern Apple/ Sony/ MSI/ Asus/ Acer etc. keyboards). And while there’s a BIOS update available for the Asus eee PC 1000H that allows the use of a chiclet keyboard as found on the Asus eee PC 1000HE, there’s no such luck for 1000HG owners like me. So unless there’s a much better hardware mod for backlit keyboards available in future (Hello Chinese copy masters, inventors of cheap touchpad covers – how come you never ventured into this?), I’ll probably have to stick to these not glowing, not fluorescent but somehow OK’ish stickers.

(* it’s not the same effect, maybe similar effect. The same effect would require these stickers to be much more expensive because the technology used on good road signs is high-tech. This is the material used on these stickers, and the company that produces these adhesives also produces the retro-reflectors on traffic signs…)