I know the following is a rather unorthodox comparison between a business and an entertainment device, BUT! – as much I condemn Apple’s business policies, walled gardens and hardware restrictions – I am more productive with a 1G iPod Touch from 2007 than with my new Nokia E72 from late 2009.

Having said that, this blog post could stop here. I still feel an urge to explain my switch to this archenemy though, so pls allow the following introduction:

I recently bought a broken 1G iPod Touch from eBay, fixed it, put in a new battery, installed the latest firmware (no jailbreak so far, btw) and started using it. And….oh, what a joy it is!

And all of this from a three year old multimedia player that comes with a fixed battery, no real multitasking capabilities, no camera and a proprietary dock connector. So how come I am rejoicing on this device like a small child?

Because it delivers. And because it’s dead simple to use. The user interface is so intuitive, everything just works, I actually don’t have to *think* while using this device. And yet it’s just a multimedia player. Amazing.

I am also using a last.fm client on my E72, I can also use it to access the Twonky Server on my NAS, there also is a new Facebook app for the E71 & E72, there also is a really, really great Twitter client for the E72 which I still like best btw (Gravity is just perfect), and it also comes with an E-mail client that’s easy to set up. And I am very sure that it will take some time until I find another phone with a camera that’s better than my old Nokia N95 which is idling in the drawers here.

However, the Firmware on the E72 keeps on crashing, the browser is very cumbersome (I am not a great fan of the Symbia S60 browser) and the E-mail client isn’t as comfy as the one on iPhone OS 3.1.3. And I don’t even want to repeat myself on Nokia’s lame app store.

In short: I used to hate touch screen phones, I now like them. 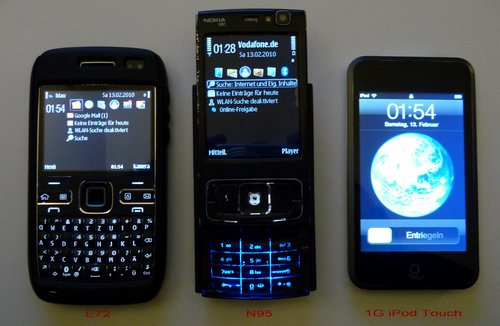 I bought this iPod Touch as an introduction to the OS, because it was very cheap and because I will give it to someone special soon. I also bought a used 2G iPhone – with a broken screen, which is yet to arrive see update here and here. Spare parts like display unit & new battery are already here. Which means that I’ll be using the E72 and a 2G iPhone over the next few weeks to see which phone performs better. As I said, an unorthodox comparison because the iPhone certainly won’t be as fast as the E72. Both devices will have to compete for the space in my pocket though.

For all of you out there who have been using iPod Touch and iPhones in the past: yes, you were right, I was wrong. The user experience really is the important part. Everything else like removable batteries, a better camera, built quality – who cares about those details? Geeks like me maybe. And you can clearly see where this stupidity ends up.

However, when it comes to the hardware inside the phone, I am very much pro Nokia. Why? Because a Nokia phone can be disassembled and reassembled within 4 minutes. Try that with an Apple device… which of course weren’t built for being opened by end users. From an engineering point of view, disassembling Apple devices is really interesting. Ah well, Bwana Kikuyumoja is slowly starting to understand the way the cookie crumbles in the Apple Universe…

[UPDATE:] Updated the Nokia E72 to its latest firmware but still prefer using the iPhone 2G. The phone just does the job for me. Amazing. Ok, I’d prefer using a 3G with better connection speeds and GPS, but I’d have to sell my phone collection in order to afford a better phone.

Reasoning from above is still valid: Nokia = great hardware but lousy software. You know I am not alone with this assumption. Actually, what I’d love to have is Nokia / SonyEricsson hardware, coupled with the openess of Android and the Apple iPhone OS user interface. That would be great…