Considering that I’ve only recently gotten into the iPhone hype and eventually accepted* it being the better device for my online needs, I am surprised to realize how much this setup actually helps me being much more productive in my daily tasks.

I spend a great deal of the day in front of a computer – and when I am not in front of my computer, I usually have a mobile phone in my hands. The combination and seemless syncing between both devices is what I appreciate the most, for it enables me to continue working on any connected device.

This automatic syncing is, to my understanding, the basis for the success of any smart phone or other mobile device today.

I never really appreciated this basic functionality such as Gmail syncing of contacts, calendar entries and e-mails until I was told to do so by my friend Mzeecedric who also dedicated a blog post to this subject (in German). Coming from a Nokia device, I was used to syncing e-mails only and synced my contacts via MS Outlook and various online services (as mentioned earlier). Calendars…. well, I never really cared about that part as much for it got synced via Outlook. Such a Gmail sync is also possible on S60 Nokia phones btw, so this basic functionality isn’t an iPhone-only feature.

I never really cared about that calendar syncing because I am old-school. I maintain an offline, paper calendar (this one) which obviously doesn’t sync with anything. On top of that, I am also the “let me write that down on a piece of paper with my fountain pen”-guy, so you can imagine my desk being covered with post-it notes and other little “to-do” lists.

In fact, I am currently searching for a (good) TO-DO iPhone app that provides an over-the-air syncing via the web. 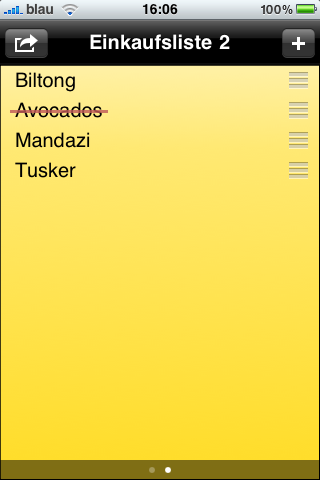 I got this German app called “ShopShop/Einkaufsliste” which does exactly what it’s supposed to do (providing a simple shopping list, see screenshot); I jailbroke my phone to display calendar events on the lock screen using “Lock Calendar” (which works better for me than “IntelliScreen”), and I also bought the pro version of “Read It Later” which btw also beautifully integrates into Tweetie and other apps. I also have accounts for Instapaper and Evernote.

Is Evernote the solution to what I am looking for? Would it also display a to-do list on the lockscreen of my iPhone (or any other phone)? Or should I rather look for a browser plugin that enables me to quickly edit gmail calendar entries / notes (which would then also appear on the lockscreen)? You know I stepped away from my offline calendar and started using the Gmail solution instead because it seemed to be the smartest way for a quick sync between a web service and the phone – and then also display on the lockscreen.

I am sure I am not the first person asking for such a service, but there are about a million pages about “kewl iPhone apps” out there, so I got lost, somehow. Any guidance on this is very much appreciated. Thank you!

* The story goes that I got so pissed off about Nokia’s Ovi store that I bought an old & broken iPhone 2G which obviously isn’t top-notch, but still does more for me than both my Nokia phones N95/E72 could ever do for me in terms of productivity. And yes, this may just be due to the awesome touchscreen on the iPhone; and yes, the Google Nexus One may be the best phone for me once it eventually arrives on the domestic market. It still surprises me though that a 3yr old phone boosts my productivity – more than a new phone by the “competitor” Nokia. And this although my E72 is supposed to be a business phone and most of my tasks on the phone are very much “business”-alike.