It’s almost one year ago that I published three (1, 2, 3) articles on mobile blogging – and nothing has really changed since then.

Back in 2007, both the Nokia N95 and the Apple iPhone were released – two completely different phones that were only compared on numerous blogs due to setting new standards on each segment: the N95 being a true multimedia phone with a decent 5mp cam, 640×480 @ 30fps video (albeit a mono mic), a (slow) internal GPS module and a really nice multimedia player. With the latest firmware, it even plays flash videos (YouTube & Co.) and has different applications run at the same time (sort of multitasking). The iPhone on the other hand provided a compatible device that suits Apple users – a nice user interface and all-in-one device like the N95 which unfortunately still missed some basic phone tools (MMS, Bluetooth exchange, etc.). And although both phones aren’t the only cool devices out there, they sold quite well. Even if the iPhone doesnt feature all these special goodies the N95 comes with, Apple’s phone still has the best browser on a mobile phone. 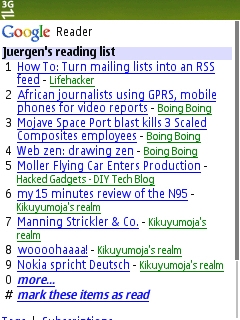 GoogleReader on my N95…

Back in 2007 I had bought the N95 because the music player on my Nokia 6230i had constantly failed (due to a bug in the firmware) and because I urgently wanted to have a new, sexy phone. Something that enables a better mobile blogging experience.

And that’s exactly the basic point here: until now, no mobile phone has actually delivered this *sweet mobile blogging* experience so far.

Back in 2007, I argued that it’s a software issue. And still believe it is. So instead of buying new phones, a systematic adjustment between the phone’s software (firmware & single programmes) and your blogging platform (WordPress, Vox, Typepad, etc.) comes into mind.

Sure, there’s this WP iPhone app some of us have tested some time ago, but still: it doesnt work that well, and it doesn’t provide a similar experience we’re having online on our laptop, surfing the net with decent browsers on bigger screens with full JavaScript support etc..

And this – I believe – is also one of the many reasons for the success of Twitter. Twitter just filled that gap on mobile blogging, phone manufacturers have failed on providing. Why? Because that special Twitter experience is the same whether you’re online via a browser window on your laptop, use it via an extra widget somewhere on the desktop, have it run as a stand-alone utility on S60 & iPhone platforms or just use SMS (for sending only, though).

You know I had a discussion with my Minister of Finance earlier this week on getting a new phone (again), and I had mentioned the new Nokia E71 and why it could be an improvement on what I am looking for (~ mobile blogging device). However, with the above mentioned discussion on mobile blogging being a software issue, I am rather confused now and think I should stick to my N95 at this point. Maybe wait for Google Android’s phone being released by the end of this year?

Another interesting developement since 2007 is the success of so-called Netbooks – which are lightweight laptops at 7″-10″ screen sizes, often equipped with an energy saving CPU, a solid state disk and enough flexibility to provide surfing the net, answering your e-mails and doing some other office work. Battery runtime still is an issue though, often only giving 2-3 hrs. Netbooks are currently sold for 300-400,- EUR in Europe and are small enough to fill that special gap the need for mobile blogging has created.

So here’s my conclusion: instead of waiting for the ultimate mobile web experience via a dedicated & maybe also expensive smart phone, I’ll bet on another setup: ppl – especially those in need in a rural Africa – will imho be introduced to the combination of basic GPRS & UMTS (3G) phones, hooked up to cheaper laptop computers such as netbooks.

Not today, not tomorrow – but maybe in two years time when basic netbooks wil sell for ~ 150,- EUR and will also be sold on the African continent in a big style. Why? Because a mobile phone is – although it is often shared with members of the extended family – still a device for a single user (despite of these new Nokias that come with multiple phonebooks). A computer though can easily be shared with others. Here’s what I had in mind: 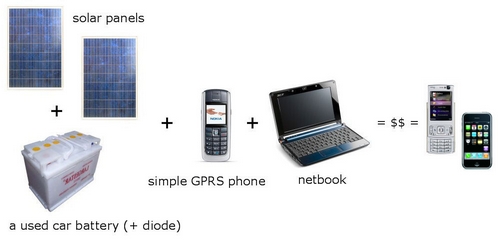 Solar panels are already for sale in rural Kenya as well as simple GPRS-capable phones, netbooks could be equipped with a free & open OS (+ BT, serial port & USB cable driver package) and it would still cost below the amount you’d normally spend on a) getting a normal desktop pc online or b) a fancy smartphone that just still doesnt deliver the real web experience.

And the best part: this setup isn’t reduced to the needs of a rural environment, but also applies to urban areas in the US, Europe or Asia. In other words: if I had to do true mobile blogging right now, I’d go for this setup (ok, maybe without those solar panels).

Netbooks are what Twitter used to be to SMS: added value.

One thought on “mobile blogging, part 3”