Pls don’t nail me down if this has been mentioned before (as I haven’t been following KBW lately due to other obligations – which is sad because the feed is pretty much interesting these days), but I just stumpled across this interesting note on another network about a German company from Potsdam that apparently programmed a web-based interface which will allow internal whistleblowers (!) to report any cases of corruption anonymously.

In Kenya, that is. 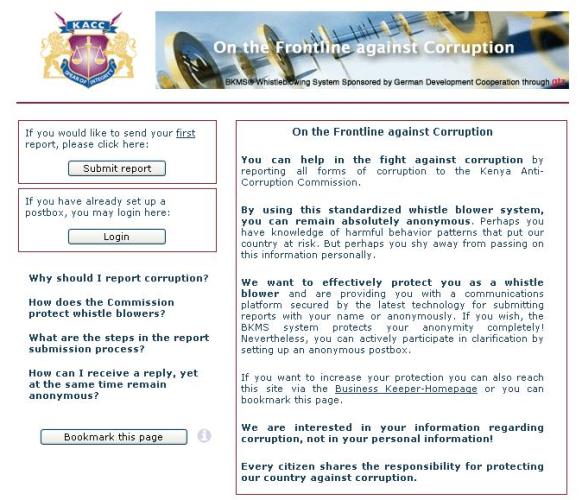 Says it on their website: “The BKMS®? system is used as an internet-based communication platform by whistleblowers worldwide (employees in companies and administrations as well as outsiders) to report misconduct and risks. If necessary, whistleblowers can remain absolutely anonymous in order to be protected against repressive measures.”

Obviously, such a system may not be working for those poor souls who are constantly harassed by the police, and may also come too late for Mr David Munyakei (1, 2, ex 3), but it’s a good start, I think. Also, I am wondering about the – fear – this may generate among members of the public service.

According to the website, the BKMS system is already? in use? with some companies and orgnanisations in Europe, but I wonder if anything like that has already been applied to the EU commission? Ah?