There has to be some kind of special relationship between me and insects* I still have to understand.

Still haunted by ever returning images of roaches that keep on bugging me in my dreams in a very Kafkaesque way, I only yesterday encountered another one of those strange phenomenons. 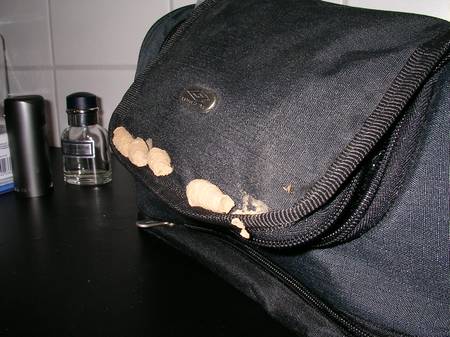 I call it the attack of the Arachnids. Or whatever kind of spidery critters it was this time. This kind that makes you feel “eeeewwwwhhhh!!!” in the first moment.

What you see in the first picture is my washbag, and I’ve put it in that place just a few days ago. Yesterday evening I needed something out of it and discovered these little cocoons at the side of the top cover.
Upon turning the cover, one of the five cocoons fell off and broke to little pieces of dried soil on the floor, releasing about 10 to 15 little baby spiders. 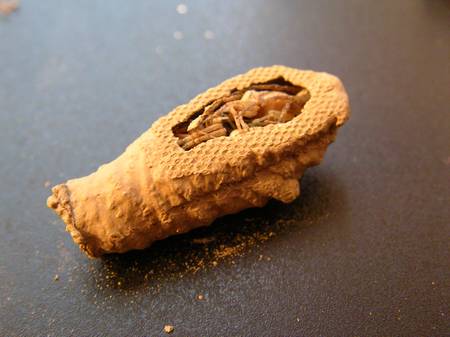 The second picture shows a close-up of the cocoon. I still have them in the bathroom and will keep them until I’ve figured out the exact biological name for these spiders. Any idea?

Talking about insects, I had to kill a tenacious wasp today who apparently thought about building her house BEHIND the books in the shelve over the bed. I wish there was a better way of convincing insects not to interfere with me.

(* insects, as in everything that moves and doesn’t have a brain to understand the simple words: “pay rent or move out”.)