My, oh my…so I opened the website of The Standard, and came across this animated gif, which leads us to the Website of the “Office of Public Communications“. 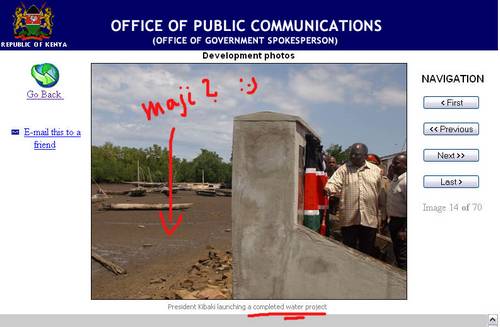 Please: with cheap questions such as “What has Kibaki done with your money?” (as shown on that animated gif!), I’d at least also expect the same sort of populism on the sample images as shown on the public communications website. You are talking about water? Then show us the water. Simpoool…

I don’t know who’s responsible for this publicity, but when it comes to politics, my own experience is that Kenyans aren’t that dumb to see WHAT Kibaki, as a person, and the NARC government has brought upon Kenyans in the past.

And I think by now everyone interested has understood so far that the “Baba Moi” era is over, and that change doesn’t entirely depend on a single person in power. So how come they are refocusing it back on a single person? Because of Raila? LOL..

9 thoughts on “where is my water, dude?”