Anyone remembers this mid-1990s commercial for UNGA where a women enters a shop and asks for flour?
The sales guy comes up with a bunch of flowers and a spoon because “next time, just ask for UNGA”.

I SOOO wish I knew the brand name for something we technicoool piipool call a BATTERY HOLDER. Or as we pronounce it in Central Kenya: Battely Holdaa. 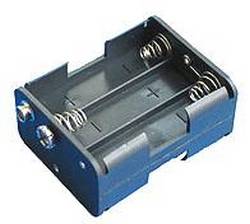 A small plastic box where you put batteries and then attach it to e.g. a radio or anything like that. Something very simple, something you can get in any place in Nairobi for something around Ksh 35/=.

But not so in Embu! To make matters worse, I also added the words “for batteries SIZE D”. Size D = those ones you put in a torch. The big, fat Eveready batteries that any duka sells.

So the shop dude & his dudette comes up with a battery clip. Another one comes with a bulb holder. HELLO? DID I SAY CLIP? DID I SAY ANYTHING ABOUT A BULB???

WTF?!?! Is it me? Is it my healthy mixture of gamaan-kikuyu-kenyan inglish that doesn’t get the message across?

So I checked about 12 electlicool shops in Embu and only ONE shop was actually operated by a real technician. A jamaa who really understood what I was talking about. Unfortunately, he didn’t have it. And of course, we make these things out of a piece of paper and some rubber band. There’s no need for a battery holder in your radio if there’s a jua kali solution available. Yani, I need this holder for the refurbishment of a scientific machine, so a jua kali solution won’t be allowed.

Which gets us to the core problem: most shopmen are just too dumb. These guys are actually selling SOLAR PANELS and MOBILE PHONES (which are quite complicated to some extend), but don’t have the slightest clue of what they are actually selling. Dito my mobile phone holder story earlier this year, which left me building my own because these girls @ Moi Avenue selling mobile phones only know Nokia, Samsung, Motorola phones and batteries, car chargers and other “fast selling” items.

You know, I am a bit mean from time to time. Earlier last week, I asked my dear Embu folks for a COAXIAL CABLE with 50 Ohms impedance instead of the usual 75 Ohm cable which is used for TV antennas. The one with 50 Ohms is used for radio communication equipment. Go figure what kind of hassle that was…

The reason for blogging this is that it clearly shows the difference between rural areas and urban areas. Same applies for the food available in hotels/restaurants countrywide. Only the usual stable food like Githerii, Mathaahaaaaaaaa, Ugali and maybe some greens (vegetabools) as well as snacks such as samosas or mandazi are available.
I actually prefer the rural, natural life to the hectic world in Nairobi, lakini – I grew up in big cities, and there are these small things I would like to be adopted by rural shop owners. How about a nice steak restaurant in Embu? How about a Java House in Nyeri, Embu, Meru, Nakuru to name a few? Is the idea so far fetched? There’s a market for that, ppl DO have the money. Just a nice place that offers more comfort than the usual Nyama Choma Tusker joints with the ordinary food anyone cooks at home anyways. Or am I just spoiled by city life? Sijui…