While boarding the Embu-bound Matatu last night, my attention was caught by a weekly “newspaper” (magazine) that sells for Ksh. 10: Tribune. 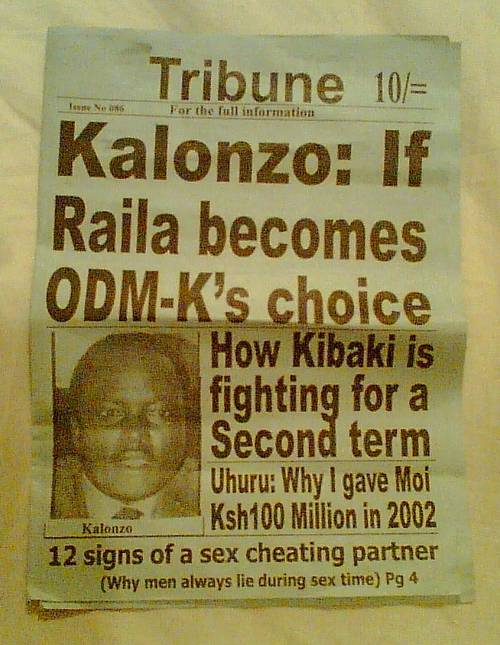 Tribune – For the full information.

The story that caught me of course was the “sexual advise” inside. After all, politics and sex/love stories are almost the same thing: nothing but many words and many lies.

1.I’ve been thinking….
If she actually tells you she’s been thinking, it’s serious. And you can bet it involves marriage, cohibition or the bitter end. It can take many forms, such as “Why do you love me?” and “Have you ever thought about the future?”. Again, have a brilliant exit plan at hand. A severed finger, for instance

4. I have a headache…
That means no action for you tonight, buddy. But you can beat her to it (!!!!!!!). If you sense she’s particularly tired when you’re honey, give her an unsolicited aspirin and hope for the best.”

Aterere….dear Kenyan brothers-in-fate, don’t tell me your women are just as bad as ours. LOL! Oh my …..

That paper is full of such “women better don’t read this” stuff. 10 bob….I could have spent on buying 2 packs of peanuts instead. Yeah…

p.s.: Do you know how it smells when cooks burn goat skin? No? Ok, come to Embu and visit me. And pls bring some Ohropax – I live next to a nightclub and its kitchen.

One thought on “Tribune”