I’ve always wanted to buy one of those blue RAF / army pullovers for their heavy duty qualities and timeless style: 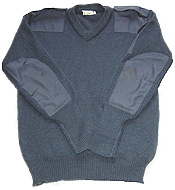 I wonder, though, what the people on the streets of a city like Nairobi would think when you wear this kind of stuff which is normally seen on policemen only…says Irena: “..hopefully the Kenya Mwananchi will not mistake you for an Armenian Mercernary.You might walk in River Road and a malicious Kenya shouts “Huyo Mercernary, shika yeye” ha ha !! and you know how us Kenyans love public lynching!!”

I might add some bling bling for that matter to make it look more realistic. ^^

Talking of mentalities in Kenya, I had an interesting conversation with a Professor of mine earlier this week, and she told me of her own Kenyan experience. You know, the part she remembered the most is the warmth and hospitality with which she was received in Kenya during her professional stay (conference on water probs). The point is that Kenyans in Germany (at least) are generally not received with such warmth and friendliness. Ama? I often feel that the biggest thing missing in Germany is an understanding for social behaviour and the awareness for doing the first step in getting to know foreigners. Don’t get me wrong, my fellow Germans do have this warmth as well, it only takes some time for them to open up as such qualities aren’t thought in school or society in general.
There’s this embarassing scene I remember like 11 years ago when the Queen of England visited Germany and our former chancellor Helmut Kohl sat there in a restaurant next to her and kept quiet because he wasn’t advised on how to have an easy conversation with her. I felt very embarassed while watching this on tv…

4 thoughts on “the blue pullover”