This E7470 only recently found its way into my home and possesion, where it substituted an aged E7440 that I sold to a client of mine. The E7440 already is a great machine, but the E7470 is even better. 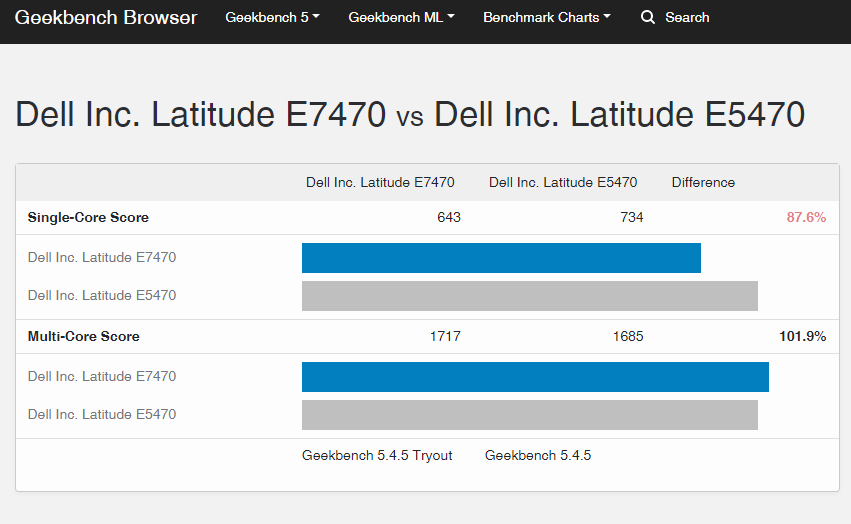 Both E5470 and E7470 have the same CPU, the same RAM specs, both come with an LTE modem, they also score quite similar on Geekbench, but they are different. The E5470 is the middle business range, the E7470 the high-end executive business machine. Or so it was when it was released a few years ago. These machines with a 6th generation intel CPU aren’t expensive anymore, are often sold as refurbished computers, and certainly won’t attract many buyers anymore. But for nerds like me they are still good enough, because they come with an “E” in their name which indicates that they may be attached to a proper docking station. One that powers the laptop and lifts it from the desktop surface which helps the ventilation to keep the machine cool.

What I also like about my E5470 (and most other Latitudes) is that they have a function to bypass the constant charging of the battery (= accu). Whereas some Apple MacBooks will eventually quit with an overcharged or overheated, sometimes inflated battery (yes!!!), the battery on my E5470 still only has a low battery wear of 16,7% which is nothing for a 5 year old battery. Of course this deteriorates when you keep on charging it. But when it sits on the docking station – and it has done so for 95% of the time during the last 4 years – then the battery won’t be ruined. Quite an important feature especially when batteries aren’t removable anymore (or unless you unscrew the battery plate and disconnect it manually).

So without any further introduction, the differences between the E5470 and the E7470 – apart from what is visible on the pictures – are:

I am using the E7470 as my 2nd Win10 & Linux machine, as a side project for ham radio stuff or Linux things. It works fine and could maybe use a new battery. Also, I am glad that I was eventually able to compare both laptops and post the results on my blog (as I have done so in the past with previous Dell Latitude laptops).

My next Windows laptop? I don’t know. At the moment, I don’t feel the urge to upgrade to anything better. I don’t want Win11 and I am not convinced of the performance increase of all Latitude successors (e.g. 5480, 5490, 5400, 5410, 5420) so far. Maybe with an intel 12th gen or an AMD Ryzen CPU things could become interesting. I even thought about using a Dell Optiplex (desktop) PC instead. But these things also consume more energy and the performance increase isn’t that significant. So I’ll probably stick to both Dell Latitudes and continue using them.

Apart from that, the 2020 M1 MBAir is still the best (THE BEST) laptop I’ve ever bought in my life. Also, it is my first new laptop since 1999. It is also against this background that any other Windows laptop would have to compete with the user and hardware experience I am having with the MBAir M1. I don’t need new computers though, and I am glad if my Latitudes just keep on delivering for a few more years.