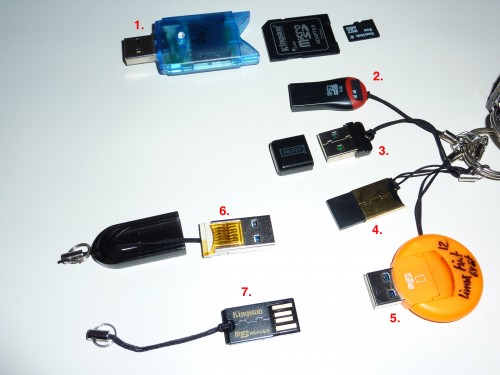 Back when I was still on Nokia and later on Android phones, a microSD card reader on my keychain was key :-) to what I call data freedom. I also believe that micro SD cards are the best invention after sliced bread and that they should be on all phones and should contain all user data (so that your data is secured in case of a water damage). The lack of microSD card compatibility on my iPhone and iPad is that one thing I dislike about these Apple gadgets.

The readers for these microSD cards are cheap – most of them purchased via eBay in China, about 1-3 EUR each. I’ve meanwhile tested a lot and the ones I’ve kept are shown above. Most readers have a similar PCB layout inside and I wouldn’t be surprised if they are all from the same manufacturer.

Here’s my preliminary rating on these types:

1. conventional USB card reader that also accepts SDHC format. Great, lightweight. I have one in my bag with cables and chargers. ==> A

2. The plastic version: one of the first readers and because of its shape nice for the pocket, but only those from SanDisk rock, the rest (like this one) are cheap Chinese copies that may fail. Also card is unprotected, may come out accidentally. ==> A

3. Small, very small, but the microSD card isn’t secured and mine has a problem as it pushes the PCB further down when the card is inserted which means it won’t fit in the USB port. Also no secured cap which may get lost. ==> B-

4. Flat reader, would be nice if only… the “ear” that holds the cord had less sharp edges. Too fragile for the pocket. ==> B

5. One strange reader, inside like no. 6. The plastic bomber. May break any time and is for the occasional user only who doesn’t mind when other USB ports are getting blocked. ==> C-

6. Not the smallest reader, but one where the SD card is secured by another cover. I’ve been using this one for the past few month. ==> A+

7. My latest purchase – the ear for the cord is inside the frame, rounded edges, still as slim as possible. Not the cheapest (4.5 EUR), but well made and from my favourite company Kingston. The recent purchase of a Kingston microSD card actually made me buy this reader no. 7. because the cards and the reader ARE superior  – at least to the nameless fake quality I usually go for. ==> A+

What kind of USB key do you use? Also one of these microSD cards on a reader? Or the conventional type? Or non at all?

I know it’s strange to write about these 1-3 EUR gadgets because we just get new ones when the old ones stop working, but it’s the details in life that matter and I wouldn’t want to use one of these USB keys that imo aren’t that well designed (they should be much slimmer). Especially if you can have the full USB pleasure with a card and reader that are as big as your thumb – but much slimmer.