Batteries for cell phones are a commodity and thus often quite cheap. The interesting part is that fake batteries will often cost the same as original ones and some dealers will swear by the fake Chinese NokLa phone in their hands that they are of course only selling “Original Nokia” products.

What you see here:

A) original battery that came shipped with my Nokia 6230i

Battery B really pissed us off as it was drained within a few hours (!). The hologram is just very simple yet it looks like an original battery (except for the hologram and the deeper golden contacts). There are no hints on Nokia’s website other than the hologram (they used to have a form to double-check that number on the holo but imho even those numbers were faked). 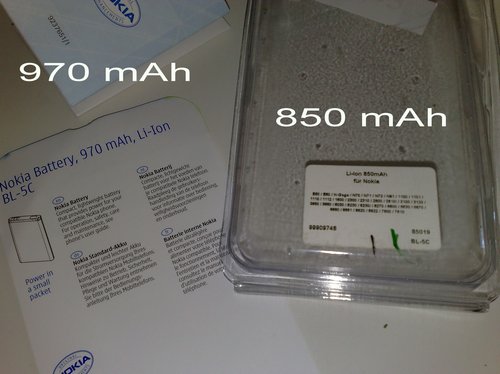 Battery B was bulk-ware, meaning that it came shipped in a plastic bag while battery C was in an original Nokia packaging with a proper invoice. A bit irritating that there are two different mAh readings – a sticker that says 850 mAh on the front and a printed 970 mAh on the back. On Nokia’s website it says 900 mAh for the BL-5C, but hey – Nokia’s website has never been that accurate on phone details. Nokia also published a product advisory on the BL-5C type some time ago – a successful battery type has been produced over 300 million times and is built by five different manufacturers.

There are many, many dealers on eBay that sell BL-5C batteries for Nokia phones and I’d say that most of them are just fake ones. On the other hand, candidate number C was the cheapest, came in an original packaging and seems to perform like candidate A. Simbaya!

eBay as an online marketplace of course isn’t the best platform to purchase such electronics, but it is the one with the most competitive, or let’s say: comparable prices. Any other online-shop or even physical store will be more expensive (due to shipping rates & other general expenses). And it ain’t about the costs alone – I’d be willing to cough up more on a battery (but not too much!) if the dealer can assure that it is indeed original. I know this is a huge issue with product piracy and so on but – other than with cars where a non-original spare part may just as well be performing as required – most fake batteries also don’t last as long.? There may be exeptions to this general rule, but from my experience with this and other phones, most copies aren’t good enough, not even close. Probably also because they are commodities and their Chinese manufacturers just don’t give a damn…