I’ve attended the IFAT 2008 today – the “15th International Trade Fair for Water – Sewage – Refuse – Recycling”. There’s an IFAT in China and one in Munich, Germany. I had already attended the last IFAT in 2005 and was once again invited to Munich this time around, with my focus being set on low-budget solutions.

As you may already know, I am active in the field of sustainable sanitation and consequently tried to spot those solutions that go beyond the typical high-tech gadgets one would expect to (and will) find on such an international trade fair. The IFAT really is THE fair for all technical solutions with 2.560 exhibitors and 120.000 visitors from all over the world. Think of waste collection, recycling machines, complete sewage treatment plants with all their pumps, screening plants and technical state of the start guidelines. In short: if you’re into environmental engineering, this is your fair.

I was still a bit dissappointed though to find almost the same products I had come across in 2005 and, obviously, most of them being from the high-tech range. In other words: high-tech = $$ (€€), but not necessarily sustainable.
For example, most sewage treatment plants still produce lots of sludge that needs to be processed, i.e. dried, composted or incinerated. To my mind, such a procedure is far from following any sustainable concept. The only sustainability to that is that it provides a secured income to those companies active in the sale of treatment options. The utilisation of sewage sludge on the other hand is still discussed on local levels though, which each federal state (in Germany) having his own perception of what *should* be done with it and how the law should be adjusted to provide a legal framework aka the pressure on the industry to act accordingly. A ticking time bomb, I think. But anyways, politics are an evil game and there sure are lots of different interests at stake here.
Another example could be the availibilty of various sorting machines used in recycling different fractions of plastics, glass, metalls and so on. Nice. But will they also allow an upcycling of products? What they won’t tell you, is that most recycled materials only provide enough quality for a downcycling process. Or take the refuse incinerators. You mean we should burn all *waste* to generate thermal energy? Is that sustainable in any way? Again, there’s a huge industry behind this – and they will make sure that this technology will always be sold.

Well, instead of elaborating any further criticism, lemme switch to the interesting part and show you some mixed visuals I had captured on the IFAT 2008: 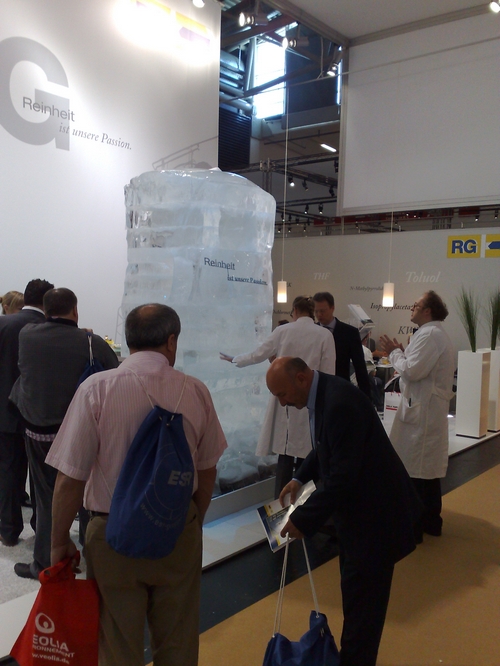 One crazy exhibitor put up this masive ice block on their stand. It lasted from Monday to Friday (5-9 May) to melt approx. 20cm on each side. An impressive way to attract visitors… 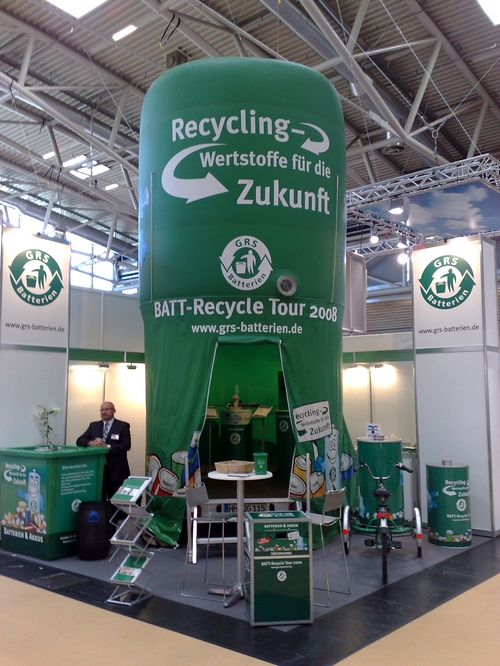 The battery recycling booth. As mentioned earlier, I am dreaming about an Africa-wide battery recyling system which would help us remove ticking time bombs from your local shamba. Let’s face it: most ppl (world-wide) just dispose of their empty batteries in the next takataka site. Would you want to have leaking batteries sitting next to your sukuma plants? Well – this scenario is still the norm, and ppl can’t be blamed for it because a) they were previously used to organic waste (maize combs, goat bones, etc.) and b) were given toxic products. Batteries are harmful to the environment! So as long as they aren’t produced of environmentally friendly materials, we will need to collect them and, if possible, try to recycle them. Problem is: Only the contained nickel will be of interest and already is a commodity with limited availibility. Hence any battery recycling system would have to be big enough to cover a critical mass and also require the support of future generations who are well sensitized to this matter.
The Stiftung Gemeinsames Rücknahmesystem Batterien (GRS) is a foundation for the recycling of batteries and financed by all manufacturers of batteries in Germany. Again, there are those batteries for sale in Europe (and Kenya, for instance) which were made in China. Those Asian manufacturers never paid their contribution to this foundation, but an up-coming law will change this in future where those who put any batteries on the market will have to pay a levy. Good. 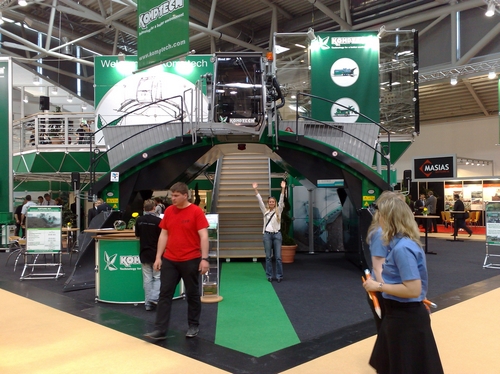 One of those HUUUUGE self-propelled compost turning machines. 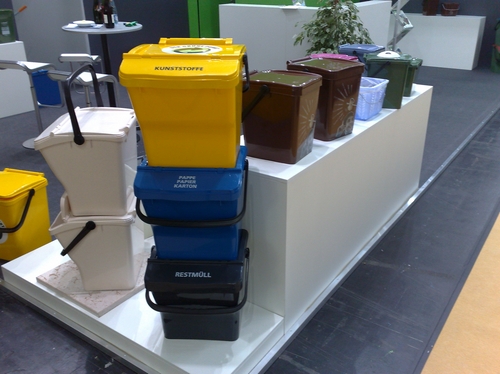 Nice little colour-coded plastic containers used for the separation of household waste fractions, made by an Italian company. Those grey coloured versions are already in use in an Italien city – adjusted to the colour of the pavement so that they aren’t that obvious (in regard to the Italien waste collection system which is different from the German, also due to climatic differences). Liked those very much and thought that these sizes would prolly sell quite well if sold through IKEA (hint, hint). Customers in Europe want this (really!) to sort their household waste. 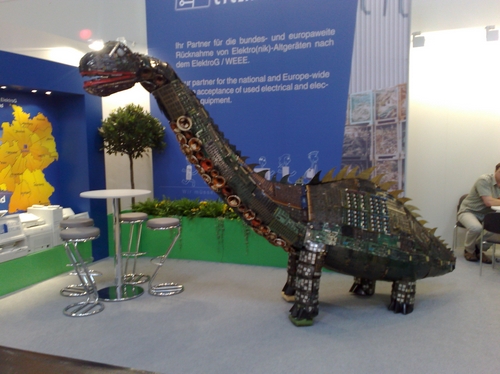 A dinousaur made out of old printed circuit boards and other electrical materials. Obviously, this company is into the E-Waste business. 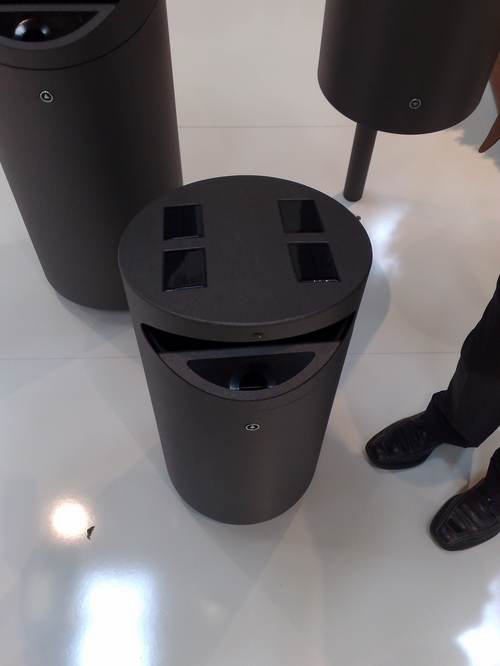 The Talking litterbin! Took this pic for fellow blogger Afromusing :-)

The product manager of this company – OTTO – the biggest and best known manufacturer of public waste collection systems (see picture below with a wall full of this well-known black 2-wheel container almost every private household in Germany owns) told me that a customer had the idea of fixing solar panels on top of this litterbin and putting a motion sensor inside so that it actually talks to you (e.g. “thank you, have a nice day”, etc. – adjustable). Well, I think that is a very smart and simple idea. Imagine this version in Kenya! Yani, it would “walk away” within a matter of 2 days, sindiyo? ;-(
Still, the idea of combining (simple, polylithic) solar cells with approved litterbin systems is smart. I like it. 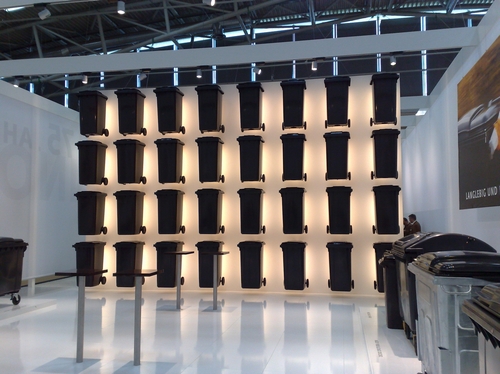 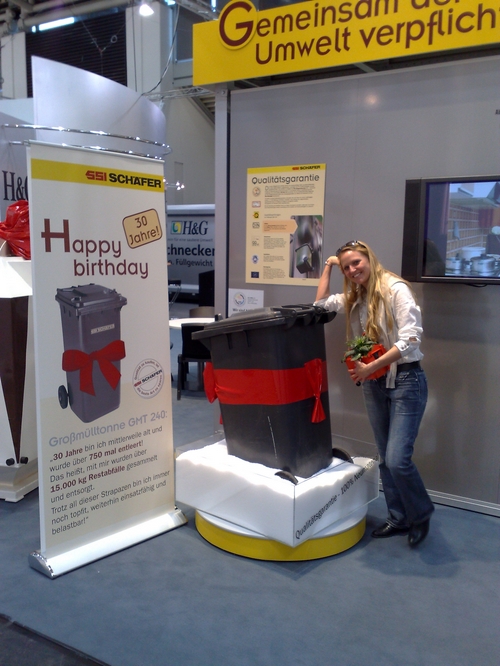 Talking of this well-known “Großmülltonne”, there was this 30 year old, used 2-wheel container on display. Silke volunteered to jump in on the picture as both were “born” in 1976 (this container is as old as she is and it is STILL in good condition). Impressive. 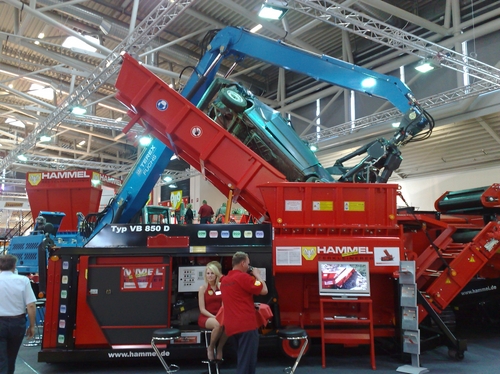 Silke then told me: “Hey, you just took that pic because of that *girl* in front of the machine.”
Being the nerd I am, I only then realized her sitting there and consequently told Silke: “Hmm…ati, it’s true, there’s this beautiful blonde vamp in front of the machine. What a waste. This sure is one machine that will attract any man just because it crushes cars. We like demolition. But it’s an interesting sight. Lemme blog this.”

So here you go. 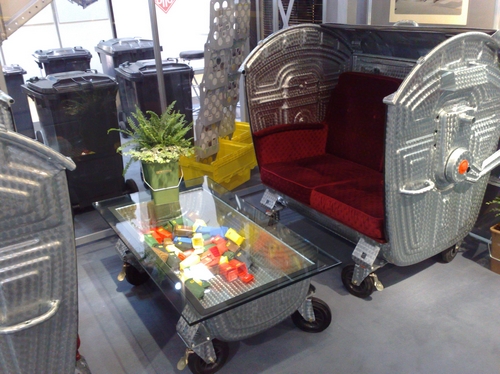 I actually combed through all stalls at IFAT to find this interesting piece of “furniture” I had already seen way back in 2005. That’s a 4-wheeled metal container normally used for collecting waste – turned into a comfy sofa. Smart! 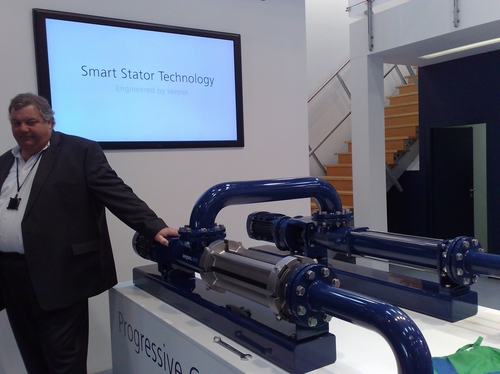 My new friend Keith from seepex.com. Keith is a Sales Manager from the US who doesn’t speak German, but he sure had an interesting product. See these two stator pumps? The one on the right side is the conventional product, the one on the left is the newly improved version coming with a 4-piece cover that may be dissassembled within 6 minutes. The old one within 20 minutes. If you’ve ever worked with such pumps, you will know the pain such a system will give you. With the new rubber housing, the exchange of parts on this pump is such an easy game.
Keith gave me a ring spanner to test it myself and hey – I had lot’s of fun dissassembling and reassembling it within the given timeframe. This inconspiciuous improvement will be LOVED by many many frustrated fundis out there….now that’s what I call a Smart Stator Pump. 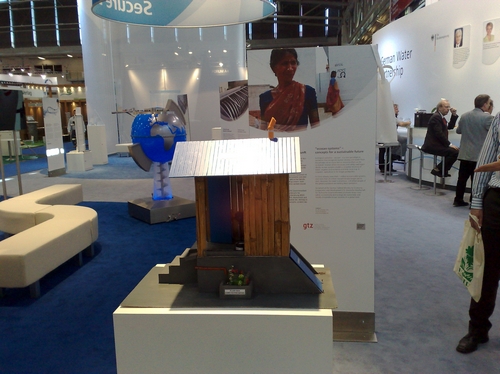 Eventually, “our” little jua kali model of a Urine Diversion Dehydration Toilet (UDDT) on display at the booth of newly founded German Water Partnership (GWP). Imagine the faces of these guys from GWP when we turned up with our improvised UDDT – a …..*ahem*….low-budget? solution on display in a smaller scale, because these approaches may not be a guarantee for huge revenues, but they sure close the nutrient loop and provide an efficient use of waste streams (faeces, urine, greywater). This is a model for sustainable sanitation. And besides, such toilets are already in use all over the world (the model above was prepared by students from The Philippines, for instance) and provide sanitational facilities to those areas where ppl just can’t afford access to conventional sanitation systems. And that’s about 2,4 billion people out there who are still lacking access to a decent toilet.

Ok, enough for the day. Hope these pictures could provide you with some insight into the world of evironmental gadgets, even though I believe the real technical solutions are still to be developed and will hopefully provide much more sustainability than what’s currently for sale. As long as low-budget / DIY solutions are still considered to be somewhat “inappropriate” for “developed” countries, we’ll prolly continue running sites like Afrigadget because that’s where technology meets people’s needs. There will probably always be a market for each niche, but let me be honest: the World’s environmental issues won’t be solved by high-tech machines ONLY, but by smarter products and brothers and sisters who will actively walk their talk on environmental protection and start with cleaning their own backyard.