Germany’s Heise Online (IT news) carried this not-so-new-news today about the ALEUTIA E1 Desktop computer which is said to consume only 8W and comes with a 200 MHz CPU, 128 MB SDRAM, 2 GB CF card, 3 USB 2.0 ports, 10/100 NIC, VGA up to 1280×1024 and an interesting carry-on size. Best features though are that it runs on Puppy Linux (2.14) OS which looks similar to what experienced users may be to used to from the MS-Windows environment. 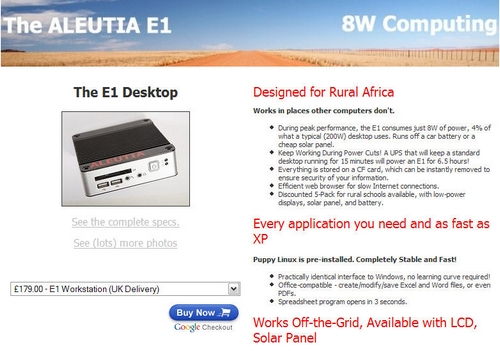 This machine is based on the eBox-2300SX “Mini Green PC” and has – in my opinion – just been equipped with some sexy marketing keywords (Africa, rural, internet, power supply, solar, etc.), although these guys behind Aleutia have indeed found the right arguments to promote their product.

So….no matter what technology you prefer (given the many different systems we have been blogging about during the last two years), my question is:
would YOU buy this for your folks back home @ shaggs*?

My other question is: IF these computers are so much better – how come they are never bought by dev aid agencies who are supposed to know the disadvantages and unreliability of a MS-Win machine in most office environments all over the world and who actually have the political and economical power to stir such purchases in this direction?
I know that in most cases, money is just given to someone who then arranges a deal with a local HP, DELL, IBM representative + WinXP + the usual setup. So instead of talking about sexier computer solutions that may be more reliable in unstable working conditions (power supply, heat, dust, many users, malware, etc.), how about some political will from top-down that directly promotes the purchase of such computers in future?

(*i think that most ppl will just have an older MS WinXP laptop which is then forwarded to younger members of the extended family and which will presumably die after the first half year in use due to an unstable power supply, some heat problems or malware and/or missing WinXP recovery CDs…now IF i was much more into IT and an unemployed graduate of any varsity, I’d buy these used computers from KTs and refurbish them with a stable X release and then sell them to folks upcountry. but hey – that’s just me thinking loud…)