My colleague has an iPhone. 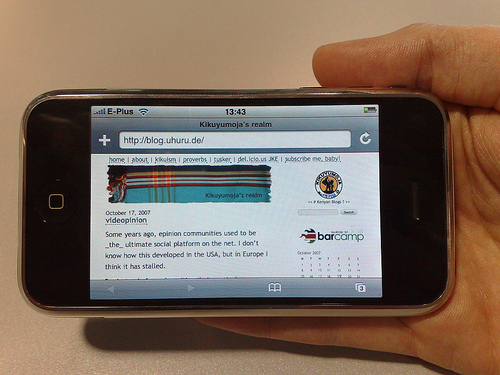 Kiku’s Realm on an iPhone

Interesting fact: the iPhone will be officially available in Germany via T-Mobile (the only network in Germany that supports EDGE) from November 9th onwards. Rumour has it that it will at least cost a monthly fee of EUR 50,- which will include some free airtime and free sms. Plus the subsidized cost of the phone, of course, which I think will settle somewhere between EUR 299,- and 399,- [update: it will be EUR 399,-].

The other alternative is to import it from the US and hack it yourself – this is what my colleague did. Some of these phones are selling for at least EUR 400,- on eBay Germany (most of them for something around EUR 550,-), but he bought it in the US, had it sent to someone who just came over for a visit and hacked it last night. He just showed it to me during the lunch break and I have to admit: the iPhone scores exactly where my Nokia N95 has its downsides, namely the interface / usability, speed and and internet surfing experience.

Coming to an interim conclusion of my first hands-on impression: if you’re into surfing the net via Wi-Fi and if your network provider supports EDGE technology, if you’re not the MMS person and want to use e-mail instead, if you hardly ever use the phone’s camera and just want a great substitute for your E61(i) or Blackberry…then the iPhone is the right phone for you.
All others who need more multimedia functions may go for the N95, but frankly said: if I could swap the internal GPS on my N95 for a much better battery runtime, a much better browser (both browsers are based on Apple’s Safari core!) and a brick format (no movable parts = less problems), heck – i would immediately switch phones. Comparing the N95 with the iPhone isn’t fair, though. They just happen to compete on the same market but were made for completely different user groups, I think.

[Update]: Ok ok ok…Bambi says NO! to the iPhone (NO! as in NO!), and since Bambi also is the Minister of Finances @ Kiku’s Realm, I’ll have to stick to this virtual (but nevertheless also neat) desktop iPhone realized through Adobe’s AIR tool: 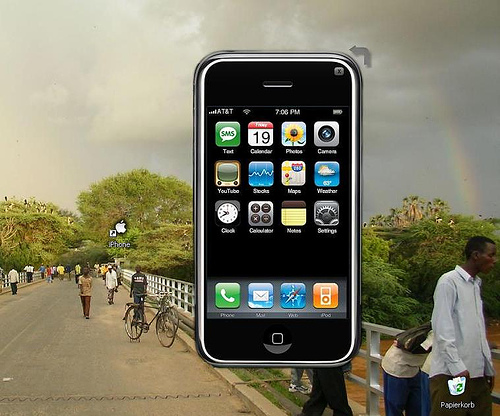 [UPDATE 2]: CG just sent me a link to macnotes where it says that the tariffs will include a flatrate for EDGE and all T-Mobile hotspots. Hmmmmm… The iPhone lacking UMTS (3G) support may be ignored with a flatrate for T-Mobile hotspots, but still: all tariffs are just too expensive. And besides – even since the iPhone doesn’t support MMS – selling sms for 0,19 EUR is just sooo…1990s. T-Mobile and Vodafone both have great coverage and network speeds, but their approach to consumers is just an insult day after day.