I started using the free synchronisation services @ mobical.net and am pleasantly surprised at the ease with which I can now synchronize the address book on my mobile phone with an external website.

Mobical isn’t perfect, and I just use it to backup and edit my data more conveniently, but nevertheless it is a bit better than using MS Outlook (which, as an MS-Windows solution, isn’t free of charge) and best: it works. Hassle-free.

…which makes me WISH that my prefered webbased email provider should offer the possibility to actually synchronize a mobile phone’s telephone book as well as the SMS / MMS inbox, bookmarks, notes and, most importantly, the calendar with my email box. Just a neat all-in-one solution.

I wonder why in a world of wide networks and a huge repository of good, free and open software, some tasks like the exchange of data are still such an issue?! Just think of the various Character Separated Values, Comma Separated Values or Colon Separated Values (CSV) formats that exist as there’s no common standard on this. *sigh*

Which gets me to the next issue that has been bugging me for some time now: The Nokia N95 is a great telephone as it comes with lots of useful multimedia features which are still hard to find with other phones.

However, having switched from a Nokia 6230i that offered an ideal keypad to key in short messages and other text, i find the buttons on the N95 rather unuseful and also ugly. Especially the keypad just below the top screen is horrible. I wonder who passed this design from R&D to production?
Anyways, in short: i like the phone but think that it still comes in an ugly packaging. Especially the front cover could enjoy some redesign. This should actually be possible as it is only secured by four screws on the back. 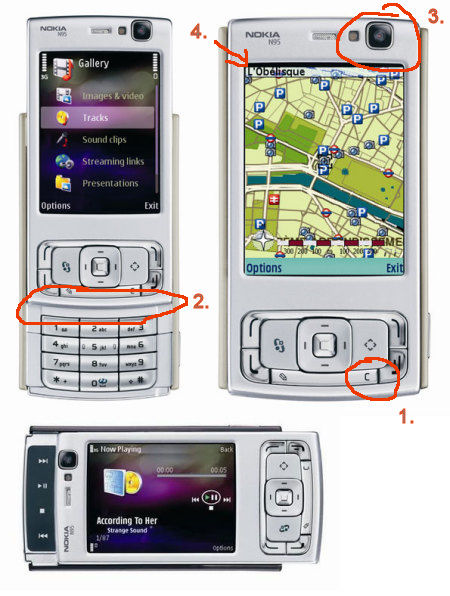 the design issues i am having with the N95…

So what’s the task?

1. the keypad on the front cover (“S60 keypad assy”) is way too narrow and I understand it was already moved down and away from the screen to shorten the distance to the actual number keypad (Nokia calls this the “ITU keypad assy”).
While writing text (e.g. sms), I sometimes type in a wrong letter which needs to be corrected. Hitting the delete (“C”) button on the front panel sometimes – unfortunately – results in hitting the red phone button by mistake => the phone goes back to the standby screen. Argh. A redesign thus should include the delete button to have a bigger size. Also, the overall size of the keypad should make use of the whole space left on the front cover.

2. Other slider phones from Nokia such as the 6110 navigator or E65 come with a gently inclined front cover. While writing text on the N95 number keypad, my thumb often hits the edge of the front panel. This could be avoided or limited by removing this artifical border and reshaping the front cover so that the thumb may freely move between the (lower) number keypad and the keypad on the front cover.

3. The front video camera on the upper right corner looks like as if it has been put there at the last moment. Obviously, there should be a better way of moulding it into the front cover. 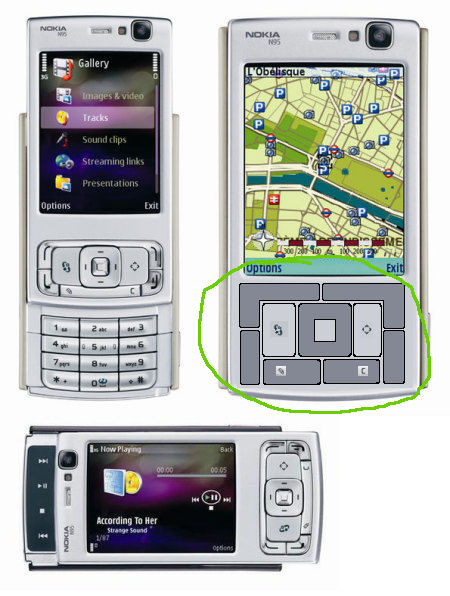 my 5-minutes paintshoppro’d version on a change I’d like to see on the front cover keypad..

As these modifications only apply to the cover, and exchange covers are already available via ebay & co, such a redesign should actually be possible and isn’t too far fetched. Chinese manufacturers (since you’re masters of copying adopting designs anyways) – are you listening?