I’ve been thinking about this one comment I encountered during the job interview last week – and it still makes me feel uncomfortable.

“Why should I employ you and not a Kenyan with similar or even better qualifications to do the job?”, she had asked.

“Well, maybe because I can get things done where others might just relax and feel too superior for the grass root work…maybe because some guys who are earning enough money won’t feel the need to care about simple work…”

There is no logical argument. Of course there are Kenyans who are much more qualified for the job – but where are they? The other day, this head of programme in Nairobi told me his latest applicant had asked for a monthly salary of US-$ 3300. And are they also capaple of creating a website for the programme within 1 hour?
See? That’s my advantage. I created it last night – it works, it’s free and it suits its purpose. I am the backoffice-admin guy. I am your problem solver. But also someone who hits the marketing drums, and feels an urge to promote your technology to a wider audience.

“Don’t you think that when I pay someone EUR 4000 a month, he or she will do a better job and be just as serious as you? Don’t you think your remark is a bit too racist?”

This is the point when my lower jaw fell down.

“No”, I replied, “it isn’t a racist remark to say these things. I don’t make a difference in race but instead in the way people approach their work”.

Honestly, what are you supposed to answer if someone comes up with such accusations? It made me feel bad, and it hits me where it hurts the most. 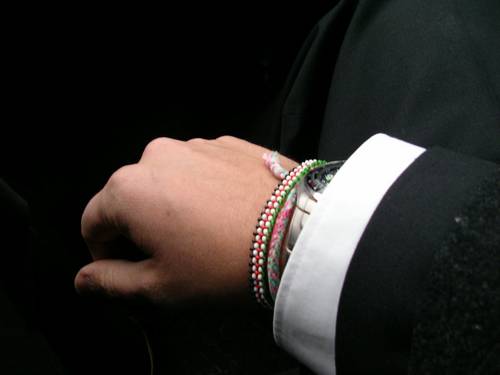 Racism….I’ve mentioned it earlier. Oh, on February 1st 2006? There you go….and the comments (still) speak for themselves.

This means that if you interviewed for a job, you might not get it, not because you are white but because the organization does not want to be perceived as favoring whites. In the US/Canada, they call this “reverse affirmative action” and there is a good example of it here.

…Steve replied in a comment back then. And I agree. I also understand the motivation behind this approach and would probably have the same strategy if I was the head of programme. But I am not. I am a 31year old cosmopolitan who has lived in different worlds at the same time, has some key qualifications, and I know how to promote myself. If these organsiations are so much foccused on sustainability, well, let them do it their way. Even if they are spending Germany’s tax payer’s money – let them go ahead and employ locals for more sustainability. If this solves the problem, I am 100% ok with that.

But it doesn’t solve anything. Development aid still is a win-win business. And as such, everyone apparently tries to see where the benefit is. So why shouldn’t I try it as well?

I agree the unemployment rate is high and that may cause resentment on the Kenyan citizen if they perceive that he is getting the job just as when we are abroad and the economy of our host is not doing well, then there is high unemployment rate, the immigrant is the one who bears the scorn.

…Irene replied back then. And yes, even that is true. Btw, the unemployment rate in Germany as of January 2007 is about 10,2%, which equals in about 4,247 million people.

Back to racism. I had been thinking about broaching this issue some time ago and also chatted with sister Kui about it. While she grew up in the UK and is SUCH a mzungu :-), I also grew up in other parts of the world, far away from “home”. She advised me to handle this matter with the uttermost sensitivity, and I had meanwhile tried to ignore it. But then it just came back. I NEED to write it down and publish it here on my blog with my simple words…

Last year, Ngugi wa Thiong’o complained about this apparent racism in the USA, and while I 100% feel him on this issue, I also wonder about two things:

b) I wondered about racism in Kenya, and how white people are first of all regarded as white people before anything else. I wondered about this discrimination, and how one finds it among all (!) groups in Kenya. If you are white, you are different. You may have grown up there, you may speak the language, you may know more about Kenyan history than the average Kamau Njoroge from South B, you may know what it feels like to wake up with an empty stomach, you may know about the burdens your extended family has put on you, all these expectations, you may…just be as Kenyan as everyone else. But it doesn’t help. If you’re white, you are different. Sure, this prevailing picture quickly clears up once ppl get to know you better, but it is still there.

And then you, respected Ngugi wa Thiong’o, come to the US and complain about racism? What about the racism back home?

See? I am popularizing it in such a way, putting it in this cheap tit-for-tat response because when I – as a German – go to Kenya and complain about racism, I am afraid of stiring up dust which only generates more hatred. I am afraid of provoking yet another discussion whereas most readers of my blog are smart enough to know that there’s no difference among human beings except maybe for their level of intellect and what kind of chances & knowledge they were given while growing up.

Racism is soooo 20th century. Let’s leave it there.