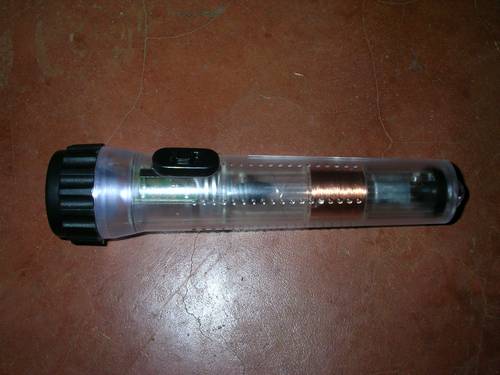 See this environmental-friendly (still not eco-effective, but anyways) torch? The LED bulb is powered by a dynamo inside, a magnet that moves within a coil and induces an electric current which is then stored in two small rechargeable battery cells.

A visiting friend of mine recently bought this nice torch on a christmas market for something like EUR 5,- (~ Ksh. 556 /=) and came with it to Kenya. Upon showing it to my colleagues at work here in Embu, they instantly smelled a very nice business opportunity. Indeed, I just wish someone here would take the opportunity and copy this in a jua kali way. I shall try that as well as long as I am here (unfortunately, only until the end of this coming week, but it is a nice incentive and makes sense to me).
I think it all started way back in 1993/94? or so when I saw a documentary on CNN/KTN about Trevor Baylis, this British inventor who came up with the Clockwork Radio and this company in SA called BayGen. I recently came across such a radio selling for something like Ksh 3500/= at Nakumatt Village, although that one also had a small solar panel for the lazy users which I now understand to be an improvement to the initial design.

So, now, as we are witnessing the WSF taking place in Nairobi and actually believing (I DO!) that “another world is possible”, how come soooooooooooooooooooooooooo much money is always spent on conferences, workshops, meetings IF instead it doesn’t take too much to at least invest those amounts of money to buy e.g. such torches and give them out to the traffic police in Kenya? There are about 5 police checks on the road between Nairobi and Embu, and most of these police officers are forced to buy their own torches for the night shift. Some of them are also using kerosene lamps. Now, while ignoring the question which stopped car has to “add value” and indirectly support Kenya’s police forces (so that they can go and buy more batteries), the truth is that we don’t have a battery waste concept in most African countries.

What happens to empty batteries in Kenya? Nothing. They are just disposed of like finished maize corncobs or goat bones. Helloooooo?! Batteries aren’t organic waste! Now go and try to explain that to the common wananchi….

Instead of informing the public about a proper waste management, I can only repeat my usual prayers: what we need are eco-effective products. But until then, let’s start using more environment-friendly products such as this dynamo torch that just eliminates the use of batteries.

Eveready – are you listening? If YOU can’t come up with a deposit of let’s say Ksh. 1/= on each battery sold in Kenya and a proper concept on how to recycle them, we’ll have to find some alternatives.

Also, since half of Africa is already covered by Chinese products, why not start importing some smarter imagineering products MadeInChina? The battery-free torch would at least make a change and give us some much-needed impact.

Something that’s much more sustainable than networked NGOs, outputs in form of printed brochures & other hand-outs and agreements on what the world should actually look like. If you won’t start this business, I will. :-)

2 thoughts on “another torch is possible”