I was enjoying a cold Mango milkshake in my beloved Nairobi, sitting here in that one popular café (free WLAN) and thought about the past week.

Monday started with the message, Tuesday saw me going to arrange some travel dates, Wednesday going to the Nbo office and rearranging some details, on Thursday I decided to stay and on Friday we saw Eric Wainaina introducing his new album. Well….life goes on. Somehow.

And then there was Saturday. Start of the World Social Forum at Uhuru Park in Nairobi. Curiosity lured me to that venue – especially since the view from there on Nairobi’s skyline is just beautiful.

The Forum itself? Hmm. I don’t know. And I won’t have the time to attend the various workshops. Mbuzimoja has to attend it though, and told me about the various costs of renting that stand at Kasarani, printing flyers and importing external consultants from Europe. Hmmmm.

“Say no to rape”, it said somewhere. Aha…
So, rape victims always have a choice and might just as well refuse to be raped?

“Another world is possible”, this year’s motto (“clarion call”) says. Oh yeah, those slogans. As if the worlds problems, HIV+, poverty, etc etc etc could be solved by nice slogans.

Just WHAT am I supposed to think of such events? The folks I’ve seen today strongly remind me of those typical Attac jamaas, the modern festival rockers (as I call them), and of my friends at the students parliament & senate: lots of discussions, sympathy against the unjustice out there in the world, pure fight against capitalism as the root of all evil – or as they officially stated it “social justice, international solidarity, gender equality, peace and defence of the environment (are) on the agenda of the world’s peoples”.

And then there is this chart showing the registration fees:

Yeah. Africa, Rest of the South and Northern Nationals. 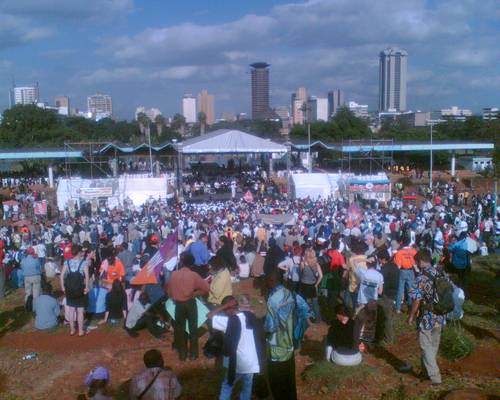 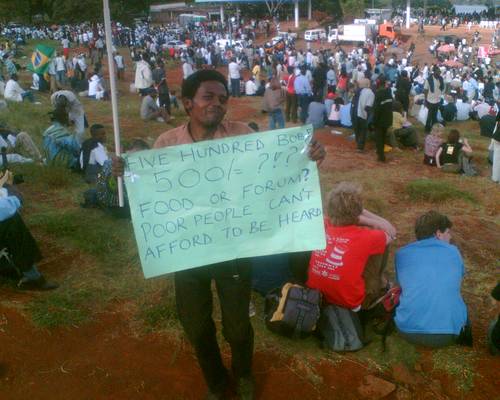 Alex from Central Kenya with a true message.

Imagine the cost of all these flyers, brochures, advertisment, etc and how it could have been used for something better instead. 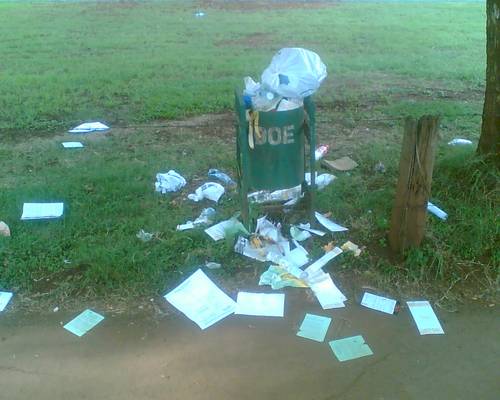 And this is where everything ends up. “Defence of the environment”??