A workshop on the formulation of a Catchment Management Strategy for the Water Resources Management Authority which shall be gazetted in ~May 2007.

The second workshop on this matter I’ve been attending, and this time it included some brainstorming on the sub-catchment management strategy. A workshop with lots of interesting discussions, some good ownership through the HQs, and a workshop which really produced some output. Something that shall regulate the water resources by establishing an effective mechanism and in the end really have an impact on water resource management problems. Something that the People of Kenya can actually benefit from. 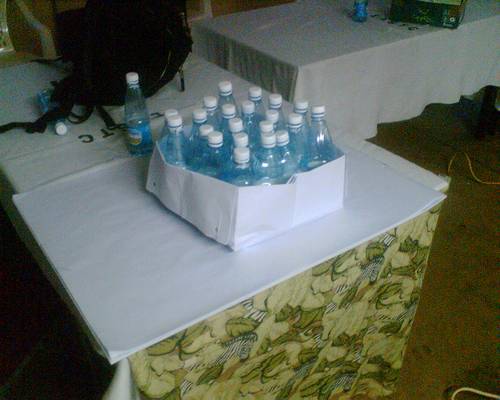 Things you do after the workshop: folding some flipchart paper into baskets so that people own up the rubbish they’ve produced during those 3 days…

A workshop that drained my brain of any blogging attempts in the past few days and left me wondering about the following observations instead:

1. These traffic police officers at your favourite road block – does the GoK provide them with batteries that power their torches during the nights?
(Kwasababu: ~makes me think the first minibus / lorry stopped has to “add value” to these people in public service.)

2. Important people in Kenya have a very…parrrrticulaaaar way of getting their messages across. The most notable rhetoric instruments of course are the implementation of pauses as well as something I call “left out words”.

Judging from the way these people speak, one can instantly assume where they normally spent their sunday mornings.

3. Toooooooothpicks! The toothpick alone deserves it’s own post. There’s NO meal in Kenya without toothpicks. No nyama choma feast without a package of toothpicks.
Ok, sure, some vegetaboool eaters are players and chewing on a toothpick all day long to maybe pretend a higher meat consumption or can’t afford any chewing gums. In fact, the other day I saw a smoker lighting his cigarette and the next thing he did with the half burned match was to stick it in his mouth.
So, next time you’re @ Java House – look out for any toothpicks on the taboool. Are there any? JH isn’t yet kawaida …

4. I pity those office folks – especially those in their red number plated cars – who have to sit in meetings and workshops most of the time. Those who hardly ever get out of their office world and sometimes even lose any sense for the wananchi out there. Workshops are exhausting. I am tired. Haiiiaaaaa……

5. Life is beautiful. @Everyone: have a nice weekend!