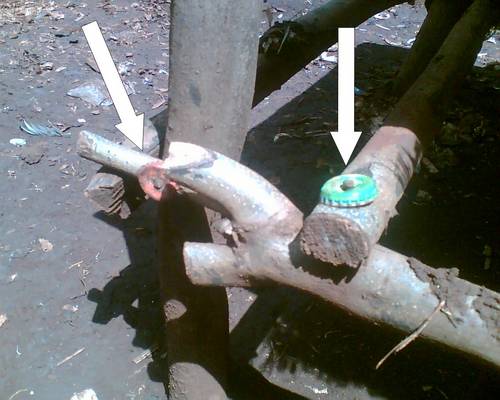 …sometimes I think an “ingenuity award” should be given to those smart ppl around the globe who have started using crown caps as washers for their various constructions. There are a lot of things one can make out of these crown caps. Ear rings, washers, knifes (?), notebook hinges :-)…anything else?

I’ll take this occasion to introduce a new category to my blog (although, yeah, categories are sooo Web 1.0 as (technorati) keywords seem to be the “in-thing” since about a year now, but wth…): imagineering.

A term introduced (to me, that is) by these guys from Denmark who have blessed the world with the Life Straw (what happened to it anyways?) and who are responsible for those PermaNet mosquito nets which are for sale in Kenya and elsewhere for something around EUR 8,-. Imagineering has its origin somewhere else though… and the crown caps used as washers are a typical example of imagineering. U know, not everyone grows up with LEGO or FisherPrice toys – and still there are a lot of ppl out there who have become quite technical (despite any missing technical machinery during their childhood) and they instantly see how things can be fixed with jua kali methods. After all, it works and it’s a great way to re-use crown caps.

Creativity is one of the sexiest things in the world.