When I woke up this morning, it was still dark outside. The bed is just next to the window and when I opened my eyes, I first of all mistook the darkness for a missing view only to realize a few moments later on that some things are actually better than what they look like at first moment.

Last night saw us going to an event called “Spotlight on Kenyan Music 2006” – a “finalist’s concert and cd launch” organized by the Alliance Française (sponsored by Total & the embassy) which presented the “best of the 2006 Spotlight on Kenyan music harvest representing Nyanza, Western, Rift Valley, Eastern and Nairobi Provinces”.
I once worked for Total (in Germany) and my parents had been working for the German Cultural Centre before, so it’s this mixture of interests that always hunts me down and reminds me what kind of “Kulturpolitik” the French have (compared to the Germans). Now that’s a completely different approach, and speaking from the European perspective, I am delighted that at least the French(men) have found some sponsoring that helps to organize such wonderful events: 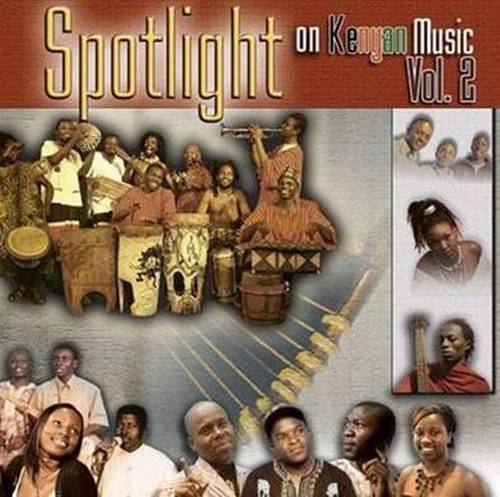 Spotlight on Kenyan Music Vol. 1 has already been a success – my friend Mbuzimoja had sent me a compilation last year, so this time I didn’t want to miss it and catch the spirit for myself. The spirit of “new” music that is being performed by local artists, something that makes you feel proud of the country and lets you forget about imported styles. No HipHop (pole Msanii_XL), but instead a focus on local tunes being reinterpreted by local artists. Something that wasn’t possible 10 years ago – all these fine networks and developments weren’t possible back then as we didn’t have a wide choice of tv channels, radio channels (that would air new tunes to far away places), a strong middle-class with lots of transport (= activity downtown even after 8 pm), efficient telecommunication networks and this overall Uhuru spirit (as I like to call it) people felt right after independance. In other words: the framework is there and it’s about time that we wake up to local music being played on the radio – not only Dolly Parton, JayLo and other imported tunes & styles. And beware – as my guitar teacher Maurice always liked to stress out: the tunes found in many Soukous songs actually come from Western Kenya and have only been interpreted by Congolese artists. So even when you hear Soukous tunes on the new Spotlight Sampler – that’s the Kenyan heritage!

The event took place at Alliance Française Gardens in Nairobi, entrance was free and it sure attracked lots of young people. Good!
This years artists included Ronald Ontiri, Naitiri Sounds, Anthony Mutuku, Bosco Mulwa, Imbako International, Shanta, Zingamoto Afrika, Sauti, Zippy Okoth, Teto Tutuma and Valentine Khakasa. The lineup was similar to the one on CD, every artist perfomed his/her song and the crowd started dancing despite of the intermittent rains. Good music needs to be enjoyed and shared – and I wonder where this event will be hosted next year. Maybe Uhuru Park? Would be great!

As a bonus, ZANNAZIKI came as “guest appearance” but they sounded way too professional compared to the other artists and somehow disappointed but that’s just my impression. The Spotlight sampler sold for 600/= Kshs. and was available as CD and on tape. The guy from the record company pointed out that it had been licenced to oversee markets as well – so maybe we’ll soon find it in the US and Europe?
For those who like good and new local music, and who really appreciate this much awaited approach on the local music scene (while ignoring all recent developments in the HipHop world), the purchase of the Spotlight Samplers is a must just like all three Kwani? books :-)

Some snapshots from the event: 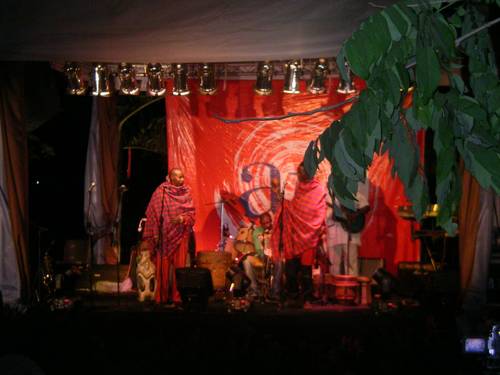 Teto Tutuma with “Iyie Ake” (“Only You”), delivering a very authentic performance 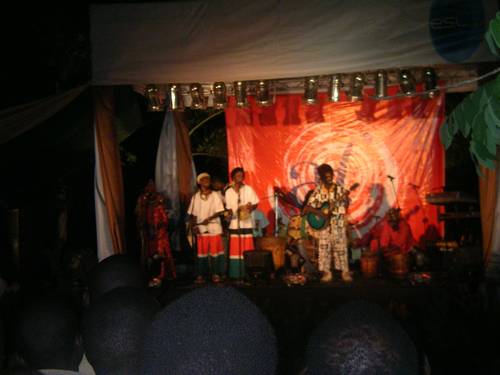 Zingamoto Afrika “Nindirona Njira”. I am 100% sure this song will be a) played on the radio soon and b) used for a commercial. Great potential & remake of classic Kiuk tunes with Swa lyrics. These guys are from Mathare (Nbo), btw. (their song reminds me a bit of these Afro Rock tunes from the 1970s…nice one!). 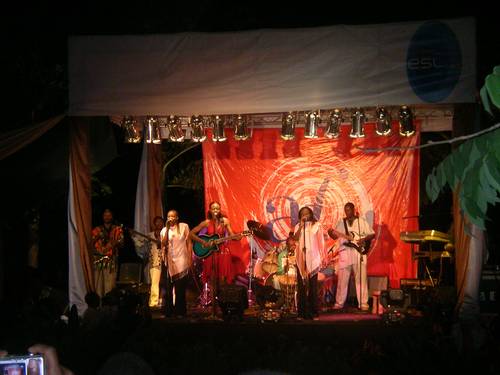 Shanta “Ndolo”. Does she have a record out yet? This could really sell big times on the European market. Hot! 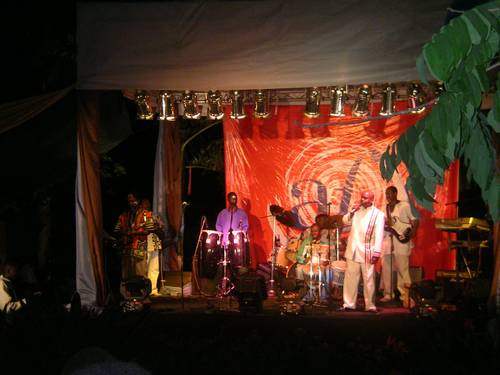 Bosco Mulwa “Kwitu Makueni”. I call him the “Papa Wemba styler”, Soukous elements in his song and a confident performance. This guy has the potential to entertain masses. 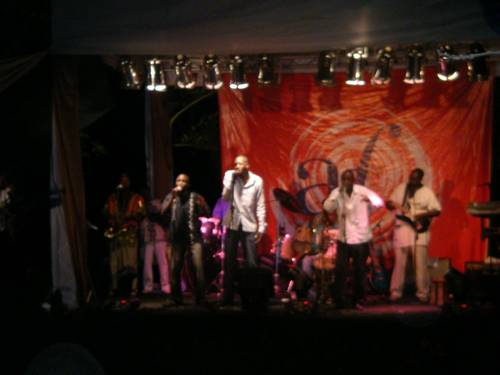 Sauti “Nakuja” Kenya’s new boygroup? Their song sounded a bit strange due to complicated harmonics but they seem to bear a great potential for much more and had a very pleasant appearance. Good voices! 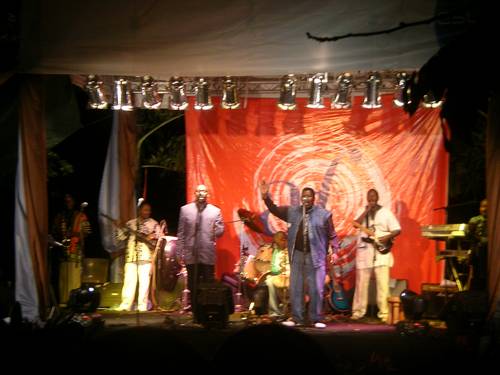 Imbako International “Halala”. Look at this man in blue jeans :-) 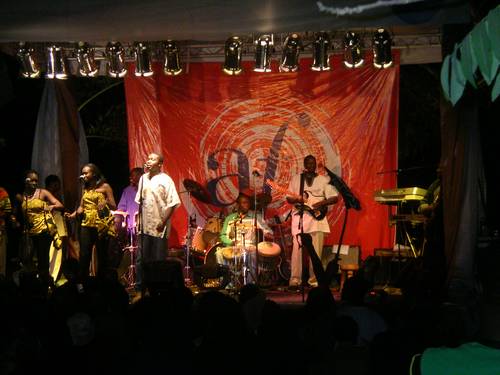 “Speed Governor” [Speediii Gaaveeehhnaaa] by Ronald Ontiri. Ok, this was my first choice. I have never been more impressed by someone performing with such eloquence and self-assurance. This song ROCKS! 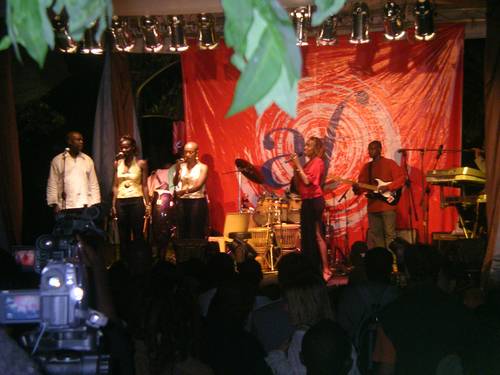 Due to restricted internet access here, I couldn’t manage to upload the videos I shot to give you an impression or at least some tunes to actually hear it (maybe later). Lots of ppl caught this on video – so it might be interesting to see if it will be available online somewhere (kenyamoto?).

Sooooo……the bottom line for me is that I shall check out more Kisii tunes in future. Anyone remember otongolo times by Poxy Presha? What a potential….and remember: this compilation has just been a selection of bands. There’s much more out there. Ngoma ni maisha! :-)