I received this newsletter from Michael Robertson, founder of mp3.com & Linspire, today and there’s something to this typical & sometimes also strange personal marketing approach ("hey buddy, look what I’ve made for you" etc) we are also used to from guys like Steve Gibson of grc.com or even Steve Jobs of Apple Computer – something were you would go: "oh, okaaaaay, now that’s cool". An approach that these guys have brought to perfection whereas a lonely ranger like Bill Gates still needed to learn that consumers want to be approached from this "look, I’ll explain this to you in simple terms" level instead of "my company is SO great and we have this high-tech blablabla" level. Keep it simple. 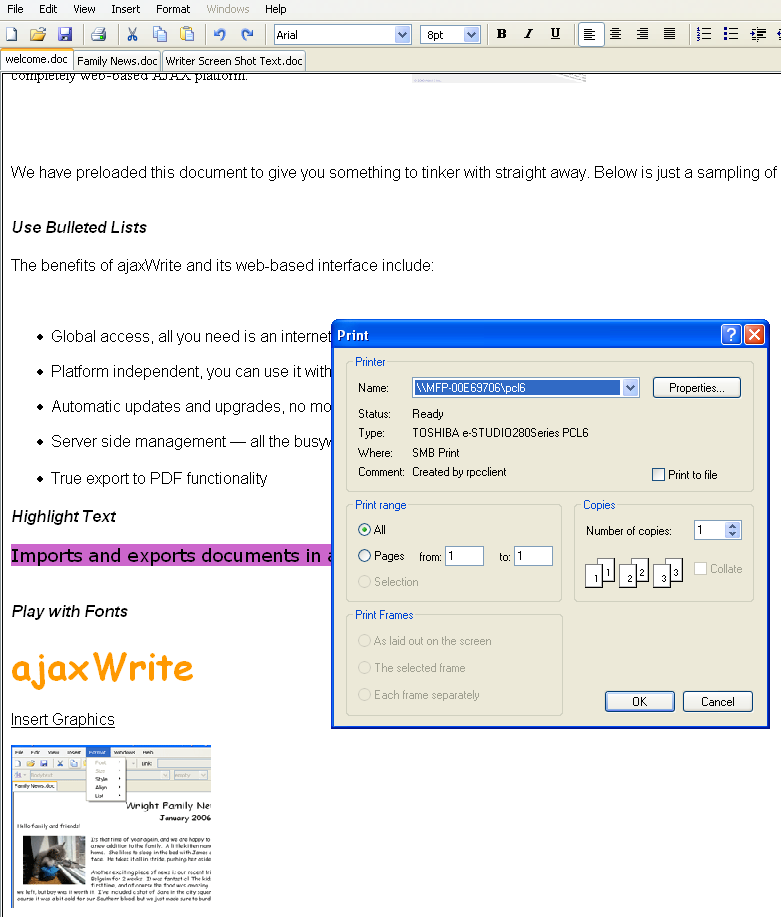 Bookmark this in your del.icio.us account and when you’re in a cybercafé with limited resources at your hands, point a browser window to ajaxWrite.com and you can still have access to basic word processor functions, write some text, format it and then save it or even print it out! I think this gets us one step closer to a more independent IT environment. No more need to buy software or the hassle of installing it, but instead the convenience of using technology whenever you need it – free of charge and at reasonable size. And Robertson goes on saying: "It’s a slim 400K. You read that right – its size is less than one megabyte, which means it runs equally well on a low-powered laptop as well as a high-powered desktop."

Low-powered Laptops? Huuuu….doesn’t that make us think of the US-$100 OLPC initiative?

And yes, there have been other ajax & web-based programs out there – however, this one gives us the feel & look of Word & OpenOffice, so there’s less adjustment to a new user interface. After all, all we want is to get things done. Also, there will be more ajax-based applications to be launched on ajaxLaunch.com in the coming weeks, so let’s stay tuned for more goodies. Enjoy :-)

P.S.: Yes, I know that there are a lot of computers out there that don’t have 24/7/365 access to the internet – however, I think this is a good start in the right direction anyways. As for the OLPC initiative – I can well imagine a scenario where these laptops are connected to a local server via wlan which could be running the ajax application…